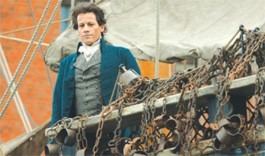 How William Wilberforce helped chase slavery out of the British Empire

The hymn “Amazing Grace” is a musical jinx, in many ways worse than “A Whiter Shade of Pale.” Melodically monotonous, fantastically ill-omened, it’s as essential to disasters as makeshift shrines with teddy bears and Mylar balloons. And it has been a key to the success of depressing movies for decades. If you hear an a cappella version on the soundtrack, you can judge that the audience really got hit with it. Still, “Amazing Grace” is utterly democratic. It sounds neither better nor worse performed by an operatic soprano or a band of kilted Scotsmen with bagpipes.

The latter is the performance that closes the film Amazing Grace, perhaps in honor of an especially strange novelty hit of the late 1960s, the last time that bagpipes made the Top 40. We learn from the film Amazing Grace that the dirge was composed by a sack-clothed penitent, half-mad from remorse. Ah, but was it the guilt that unhinged him, or the song itself?

In fact, Amazing Grace has the song’s history as its sideline. That story is used to hold together a rambling biopic, shuffling back and forth in time. Its era is the turn of the 1800s. Its subject is the immortal William Wilberforce (Ioan Gruffudd, never better), the MP who devoted his frail health to stamping out the British slave trade. Stricken with stomach troubles and opium addiction–par for the course in those days, when inebriation was all over Parliament–Wilberforce was still an activists’ activist.

Director Michael Apted assures us that very socially unsuitable people always make reform. Yet the scenes of flower-child transcendentalists–Wilberforce wriggling in a pasture, staring at the clouds–is a heavy cross for the mean to bear. “I, find God? I think he found me,” says Wilberforce. Such was the Romantic era–the rise of the Individual marked by moments that are still embarrassing 200 years later.

These cringe-inducing moments–William’s courtship with Romola Garai has a few of them–never seriously interfere with the progress of a richly staged, engrossing film about a well-spoken, politically complex era. The casting is happy throughout. The estimable Bill Paterson plays a Scots MP with some money in the slave trade; Ciaran Hinds is a dour Tory ringleader; Toby Jones as the decadent, wizened duke of Clarence. And Rufus Sewell plays Thomas Clarkson, one of those political hot-heads every more moderate activist has to have behind him.

Director Apted doesn’t have to explain the character of the minister George Fox; he lets Michael Gambon’s molting periwig and air of sated slumber do it all. Best of all is Albert Finney as John Newton, the composer of “Amazing Grace” and other light airs. Newton was a former slave ship captain, who lived like a hermit in penitence.

When it comes time to tell of the way Africa was chained and raped, Apted trusts the gentleness of the audience. He gives us the horror, as Shakespeare would have. Rather than looking into it, we look into its reflection, into the stricken face of a shamed man whose misery is still audible in the tragic notes of that gloomy old song.