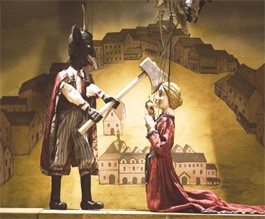 Imagine you’re seeing it as a preview on the latest Harry Potter DVD: In graphic, lingering, close-up, a man’s fingers are sawn off. His tongue is cut in half, length-wise, with a pair of bloody scissors. After several minutes of intensely detailed footage, his face is peeled off, his wildly darting eyes showing the audience unambiguously that he is still alive despite being mutilated beyond anything any human being should ever have the misfortune to endure.

Who watches this stuff?

As it turns out, everyone. I certainly did, though completely against my will. The footage in question came from a trailer for the upcoming direct-to-video release of Asylum Entertainment Company’s film Freakshow. It was tacked to the beginning of a fantasy adventure film that any parent might have grabbed off the shelf at Blockbuster, thinking to placate their Dungeons and Dragons-loving pre-teen with a direct-to-video rip-off of Dragonheart.

One minute my boyfriend and I were anticipating a laughably bad sword and sorcery film, the next, we were puking our guts out. As I told him later, after the shock treatment and primal-scream therapy had taken affect, the filmmakers might as well have come into our home and re-enacted the “squeal like a pig” scene from Deliverance using the two of us as a collective Ned Beatty.

Among other things, I am a horror writer. I own a copy of Hellraiser and love to freak myself out by watching it alone, late at night, when my boyfriend is out of town. I grew up watching Full Metal Jacket and Apocalypse Now. I began reading Stephen King at age 10. No one could accuse me of being a wimp, but this preview was so disturbing, so unnecessarily vivid in its depiction of gore and suffering, Pinhead would have wet himself. I found I had turned into a representative for Concerned Parents in a matter of seconds.

Who the hell thought it was OK to tack this wretched thing onto my Z-flick cheapie, I wanted to know. It would have been one thing if I rented The Faces of Death or The Texas Chainsaw Massacre (although this still wouldn’t have prepared me for the level of violence I was subjected to); it was quite another entirely when it popped out at me on a rental which, while unrated, was clearly being marketed as a teen-centric rip-off of Eragon. Due to the poor quality of the DVD, I didn’t even have the option of hitting the fast-forward button once I realized I was the unwitting renter of Pandora’s box. Fast forward couldn’t help you. I couldn’t look away.

Outraged and violated, I wrote every single movie agency I could think of, starting with an angry letter to Asylum Entertainment itself. It went unanswered, of course. Blockbuster’s corporate offices sent me a form letter as if to say, “Thanks for complaining! No, we won’t pay for your therapy!” The two video clerks I ranted to at the Blockbuster store who are just trying to make a living told me that only the corporate people can decide to pull material from their shelves. And no one seemed to quite believe me when I told them this was the horror equivalent of Backdoor Sluts 15.

Horror isn’t just a chilly scare in the dark anymore. It is rapidly becoming a genre that strives to outdo its own acts of sadism. Each successive Saw movie is worse than the last in more ways than one. Its signature booby-traps get increasingly more creative, more bloody, more intense. Its characters, devoid of any human qualities, are mere meat-puppets, irredeemable narcissists who exist merely to be flayed, stabbed, burned or otherwise mutilated for the enjoyment of an audience eager for more and more exciting examples of painful death. If there is any doubt that America is becoming a nation of sadists, one merely has to look at the Saw franchise’s record-breaking ticket sales, or the fact that a sequel to Hostel, the most feel-bad movie of 2006, was greenlighted.

The Hostel sequel is particularly troubling. Having seen director Eli Roth’s previous installment (“presented” as it was by Quentin Tarantino), as well as his popular and darkly funny freshman effort Cabin Fever, I can at least say that his work has artistic merit. Unlike the noncharacters in Saw, the people in Hostel are characters we care about, making their grisly fates all the more disturbing as they plead with hacksaw wielding maniacs to spare their young lives.

The end of the first Hostel even contains a satisfying and just revenge scene where the victim at last turns on his tormentor, dispatching him while the audience rightly cheers. Roth’s vision of horror is strangely moral in this respect. Still, with the advent of Hostel 2, the rise of gorno (a term Roth vociferously rejects but which was nonetheless coined specifically to describe his body of work) as an American film genre can no longer be denied.

Gorno is, like porn, an extreme depiction, in film or photography, of parts of the body–in this case, a body that is being tortured to death. It is characterized by intimate, lingering shots of blood, and often inspires the same sort of chemical reaction in the body that one gets, far more pleasantly, from watching or engaging in sex. Filmmakers like Roth use horror to get your blood racing, and they succeed very well. Who wouldn’t get some sort of horrific thrill from watching a young man’s Achilles tendons being abruptly severed in intimate closeup? This is (hopefully) an experience so far beyond our own we can’t help but be fascinated.

Sex and death are often a delicious pairing, but with the rise of films like Hostel, there has been a disconnect in the American psyche. At some point, we turned the forbidden thrill of grisly death into something sexually titillating. It’s as if we have done with porn all together, exchanging the same-old-same-old penetration of the phallus with the penetration of the knife. Why else would a Hostel sequel starring an all-female cast of torture victims be getting such an anticipatory buzz? The sick thrill of mutilation is paired with a comely group of helpless females, the trailer showing one of them bound to a chair, bare-armed and screaming.

If there is any doubt that Roth and his ilk are successfully blurring the line between sex and death into an all-encompassing, sick-thrill tank, you have only to look at the teaser poster for the movie which shows an obscene close up of mutilated pink flesh strongly suggestive of a vagina. Viewing the poster online at work could easily get you fired, though whether this is because it suggests to employers that you are a psycho killer or a pervert is up for grabs.

In this climate, where men and women both are being reduced to pornographic objects by filmmakers and brutally dispatched for the entertainment of (at best) a numb and (at worst) sadistically minded audience, is it any wonder one deeply troubled horror author’s cry for help is universally ignored? The sort of sickness I bore witness to on the Freakshow trailer has become the norm. My angry letters net no response.

A corporate entertainment distributor like Blockbuster will hardly be interested in stopping the spread of the very footage that has earned it so many billions of dollars. A trip to Blockbuster reveals that most of its new releases are B-flick slasher films from the vaults of direct-to-video companies like Asylum Entertainment. The covers of these releases, such as The Pumpkin Killer, with its mutilated face staring out in some grotesque invitation, have become the new porn. It is no longer surprising that audiences are getting off on gore, but usually one has a choice over whether they are exposed to it. I had no choice. And as much as I love Pinhead and the gang, there is a point at which the guts stop being interesting and start becoming a warning sign of a vast national sickness.

And if I’m going to be ambushed in my own home by intense pornography I didn’t sign up for, then I pray to God that next time, the thing that gets me is Backdoor Sluts 15.

PS: After I submitted this article for publication I did, in fact, receive an answer to one of my emails.Ý David Rimawi, the North American Marketing and Sales Director for Asylum Entertainment expressed genuine concern over the preview for Freakshow and said that, as Asylum is trying to branch out to a more general audience, he would take my suggestionsÝabout makingÝsuchÝfootage harder to access to heart.Ý I thank him for having a soul.