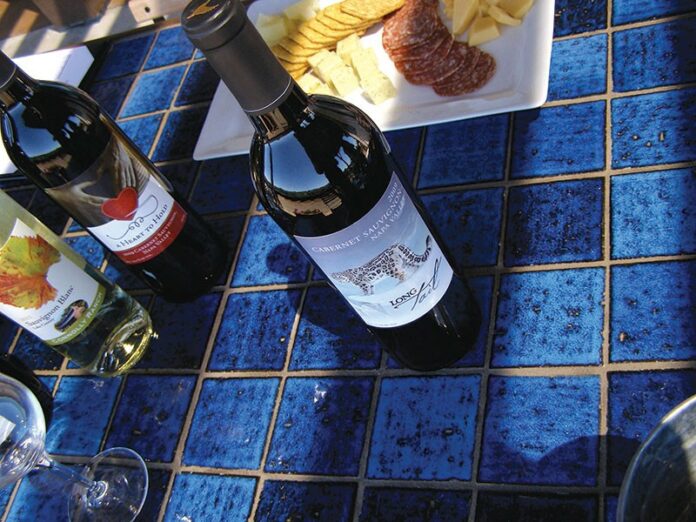 Wine that feels good before the first sip

You’re in a room. Yes, it’s a winetasting room. There are two doors, and you must decide. Behind one of the doors is a delicious bottle of Napa Valley Cabernet Sauvignon. Behind the other is a wild snow leopard. The clock is ticking. Which door do you open?

Relax. You’re at Goosecross Cellars, where you can get the wine and help the snow leopard to thrive in its own habitat at the same time. Founded in 1985 by Geoff and Karen Gorsuch with partners David and Colleen Topper, Goosecross purchased a web-based wine charity program from David’s sister a few years ago. Key to the plan is that these are not bulk wines with custom labels slapped on, but the same product as that bearing the sign of the goose. And while the price is the same, the “markup” that goes to participating charity organizations is no 10 percent—it’s significant. That’s an enticing incentive for folks interested in making a donation, says Alicia Antone, who heads up TorchLight Community at the winery. And then, “Once they taste the wine, they’re sold,” she says.

Torchlight’s clients are as diverse as the Old Las Vegas Mormon Fort State Historic Park, a Heart to Hold and NorCal German Shorthaired Pointer Rescue. Among their most successful clients is the International Snow Leopard Conservancy, based in Sonoma. The conservancy aims to protect the elusive, big cats through education and partnership with the communities that live with them.

Torchlight is much more than just a turn-key website. Winery staff pour at fundraising events, some of which may be held at the property’s old Tudor-style house. Goosecross itself was purchased in 2013 by a Colorado-based investment group owned by members of the Coors brewing family, and for now, manager Christi Coors Ficeli has kept the winery’s low-key, small-winery atmosphere intact.

A super-tangy sipper, the grapefruity 2011 Lake County Sauvignon Blanc ($27) is on offer at the friendly barrel room bar; your choice of goose or leopard on the label. The pretty 2011 Napa Valley Viognier ($38) is more peach than apricot, and is unsullied with oak. From the winery’s estate, the 2009 Napa Valley Merlot ($45) rolls a malt ball down a vanilla-scented lane lined with raspberries, the 2009 Howell Mountain Cabernet Sauvignon ($79) is elegant and well-rounded and the 2009 Yountville Cabernet Sauvignon ($56) is the kind of bright and friendly Cab that’ll please non-Cab fans, too. These wines are only available at the winery, or via TorchLight Community—except for one retail shop in Omaha, Neb. A charity case, no doubt.