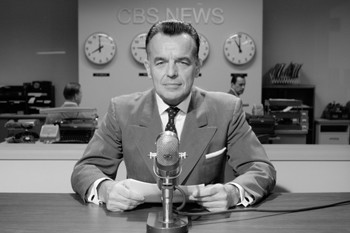 Reliving the blacklist in ‘Good Night, and Good Luck’

‘My memories of Joe McCarthy are the memories of a little girl, but they are still very powerful,” says Santa Players’ artistic director Holly Vinson immediately after catching director George Clooney’s Good Night, and Good Luck. The film–about the real-life, on-air battles between fabled television newsman Edward R. Murrow and the infamous junior senator whose war on communism had America shaking in its boots in the 1950s–is a slice of history about which Vinson has a very specific perspective.

Vinson was eight years old when her mother, the successful radio and television writer Pauline Hopkins, became a victim of the Hollywood blacklist. Vinson’s father named his ex-wife as a communist before the House Un-American Activities Committee. The family went from living in a mansion next to prizefighter Jack Dempsey, with all the Hollywood perks of the day, to a small rented home in the suburbs where FBI agents routinely came to the door and attempt to coax information out of Vinson and her sister.

“Looking back, I find that to be pretty horrible,” Vinson says, “but to a kid, all of that was exciting. We were unusual, we weren’t the run-of-the-mill family like the ones we saw at school. Our mother was a writer–and a dangerous writer.”

Vinson sees the ironic pros and cons in the way the blacklist affected her family. “In a sense,” she says, “we lost our house and our money, but I gained my mother, because if the blacklist hadn’t happened, we would have been raised by other people while my mother did the Hollywood thing. That’s the way it was in Hollywood in the ’50s.”

On the negative side, Vinson, who also teaches elementary school, had to witness her mother watch her name and reputation disappear after years of work building it up. Hopkins began working under the name Pauline Stone, ghostwriting scripts for other, less talented writers. “In retrospect,” Vinson says, “if I’d been the mother with young children, afraid to speak my name in public, I don’t know how I could have done it.”

In the film, Murrow is masterfully portrayed by David Strathairn, but Sen. McCarthy, shown only as a figure on newsreel footage and on television, is essentially played by himself. Vinson finds that to be an interesting directorial choice, allowing audiences today to see exactly how McCarthy appeared, free from the interpretations and alterations of a performer. That said, Vinson suggests that it’s difficult to believe any actor could make Joe McCarthy look worse than he cold all by himself.

“Even as a girl,” she says, “I remember wondering why nobody could look at McCarthy and think, ‘What a slob, what an obvious liar. What an unintelligent man.'”

As the film shows, regardless of whether or not there was a communist plot to undermine America, McCarthy used interrogation tactics that were crude and transparent, summoning citizens to Senate hearings and accusing them of communist conspiracy and treason without ever allowing them to know the evidence against them or the names of their accusers. In the case of Vinson’s mother, they at least had one fact right.

“My mother was technically a socialist,” says Vinson. “She joined the communist party during WW II, when Russia was still an ally, but she never wanted to destroy America. She loved America. Later, in Chicago, she attended two communist party meetings and found them so full of FBI agents she wasn’t interested in going back. She said there were more people spying on who was there than there were people who were just . . . there.”

As Pauline Stone, Vinson’s mother was eventually able to make living writing for such television shows as Lassie, Ironside and The Courtship of Eddie’s Father. But she never again worked under her real name.

“That was a terrible thing,” Vinson says. “You spend your whole life working to establish your name, and then, suddenly, your name is gone, it’s been destroyed by this ugly little man who was somehow able to frighten an entire nation into believing that these names were dangerous. This movie only hints at that, but it’s a big part of the story.”