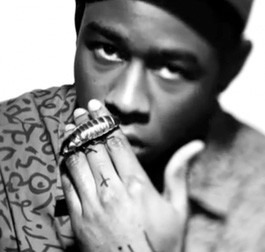 In the last three weeks alone, the 19-year-old rapper Tyler the Creator has had 2 million views on YouTube, played a sold-out mini-tour with tickets scalped for hundreds of dollars, been retweeted by Kanye West, met Justin Beiber, starred on MTV, performed on Late Night with Jimmy Fallon and inked a record deal.

Somewhere in that timeline, at a show in San Francisco, he also landed a stagedive directly on my face.

Tyler (last name unknown) is the charismatic leader of an 11-member Los Angeles group called Odd Future Wolf Gang Kill Them All, whose sudden skyrocket to popularity is matched only by their irreverence, creativity, amorality and unbridled energy. Their live show last week in San Francisco was the most punk-rock thing I’ve seen in ages, with a constant swarm of sweat-drenched, flailing bodies, many of whom spent the set flipping off the band, screaming chants of “Golf Wang” and “Swag,” crowdsurfing, smoking blunts, moshing and getting into fights.

Odd Future gave it right back, stagediving, giving the finger and viciously berating the crowd. If the spirit of punk died with the Offspring, watered-down indie rock and Volkswagen commercials, it’s back—with a vengeance—in OFWGKTA’s brand of hip-hop.

In the wake of Arcade Fire’s Grammy win for Album of the Year, there’s been a lot of chatter about the criteria for “underground” music. (Laudably, Arcade Fire has stayed with its independent label Merge Records, even while selling out huge shows and licensing songs to the Super Bowl.) But it was a long ride for the tame Arcade Fire, whereas Odd Future have gone from obscurity to the stratosphere in what seems like five seconds.

Last year, their world was limited to Tumblr, which hosts seven albums’ worth of Odd Future music for free download. Their Twitter feed was just as small; one day, at the local skatepark, the group took live tweeted requests for skateboard tricks, attempted them, filmed it and posted video the next day.

Times have changed, quickly. Last week, Tyler was paid a visit by Justin Beiber, who’s evidently a fan of Tyler’s “Yonkers” video. In it, Tyler has the word “KILL” and an upside-down crucifix Sharpied on his hand, eats a cockroach, throws up, gets a nosebleed and then hangs himself. (“The video of 2011,” tweeted Kanye West.)

Many critics have spent a lot of ink, or, as the case may be, keystrokes, trying to morally reconcile the group’s lyrics of killing and raping people with their talent for wordplay and fresh production. This ethical exercise spans through Eminem and the Geto Boys back to the N.W.A. generation—ironically, people who are now parents of OFWGKTA’s fans. But nobody paying attention thinks that Odd Future Wolf Gang Kill Them All are a flash in the pan. Get used to the name. You’ve been warned.