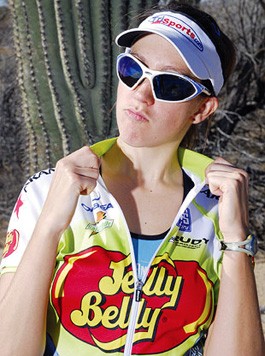 Inspired by a viewing of the two-man luge event in the 2006 Winter Olympic games, the editors of ESPN.com wondered if it would be possible to light the fire under an average athlete and see him or her compete for the Olympic gold in under two years. This nugget of an idea quickly escalated into a pilot project; they only needed a driven but average athlete to accept the challenge. Kathryn Bertine fit the bill. A former professional figure skater, triathlete and cyclist, Bertine had a bevy of races under her belt and no internationally recognized wins. Plus, she was a writer.

Bertine knows what it’s like to literally put everything down—even her wedding engagement—and train for the love of the sport. When ESPN approached her, she was in the depths of despair. With an indestructible will but no sponsors—a deadly combination—she was working a part-time waitress job in order to maintain her workout schedule at the elite level. They called her just as she was about to walk into a fertility center to sell her eggs for a little extra money. Thus began her incredible journey toward Olympic qualification.

Backed by the sports network, Bertine wove her way in and out of the Olympic Training Center in Colorado Springs as she tried her hand at the pentathlon, team handball and track cycling. Documenting her entire experience on ESPN’s So You Wanna Be an Olympian? E-ticket series, Bertine swam, ran, jumped and jousted in her efforts to become an Olympic athlete.

She’s also written a book, As Good as Gold, which puts fitness into form, acting as a window into the secret lives of those ambitious enough to go for gold. On July 30, Bertine stands as a testament to the power of random intervention when she appears at the Vineman Triathlon Expo.

Despite her efforts, Bertine was not able to visit Beijing as an Olympian, but that hasn’t stopped her. With 2012 on the horizon, the 31-year-old is speeding toward the finish line again as a cyclist, one road race at a time. This time, however, it will be with the complete support of her fans, whom she has garnered over the past four years. At times, the response of her fans is her primary source of inspiration. In an interview with the Bohemian, she says, “I take the support of those who believe, and disregard anyone else. That’s the way to do it.”

Bertine will gratify her fans and tri-hopefuls under the Trisports.com tent at the Vineman Triathlon Expo on Friday, July 30, at 8695 Windsor Road, Windsor. Noon to 3pm. Free. www.vineman.com/expo.