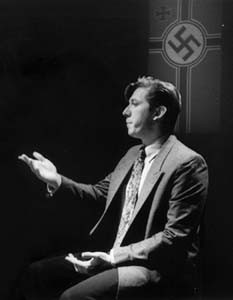 WHENEVER I HEAR the word culture, I reach for my revolver,” Hermann Göring, Hitler’s despotic second- in-command, reportedly once remarked. The arch-Nazi had every reason to disdain culture since it is, in large part, the product of intellectual and artistic activity–elements notorious for revealing the vacancy of racists’ brainpans.

In the early ’80s, “The Order” assassinated public figures thought detrimental to their atrocious cause, among them the loquacious, Denver-based talk-show host Alan Berg (memorably portrayed on SCRT’s stage by Eric Thompson).

Operating as an ad hoc crime syndicate in order to fund their hate activities, the group also committed innumerable acts of larceny, pirating $3 million alone from a Brink’s truck in Ukiah.

A farrago of docudrama and news commentary, Dietz’s play interestingly sidesteps traditional narrative structure for a pastiche of impartially delivered reports interspersed with dramatic examinations of real incidents. The theatrical effect is tremendous, though the play’s dense verbiage often errs on the side of didacticism (a phenomenon de Priest’s bright players do attempt to mitigate, however).

SCRT’s 11-player ensemble brims with talent and does well with what are surely emotionally tasking roles; by turns, nearly all the actors portray some order of white supremacists–composing a veritable chorus of gross hubris and insidious hatred.

Rendering his monologue with an arresting poignancy, Tim Hayes offers an especially moving and indicting performance as a rueful father witnessing the cumulative effects that casual household racism have had on his adult son.

Likewise, Sandra Ish consummately deploys a nightmarish monologue that imperceptibly evolves from a parody of a ne’er-do-well to a ghoulish account of a child being sealed in a time capsule. Here and elsewhere, Ish convincingly makes the subtle turn from black comedy to heart-stabbing horror, nimbly setting the traps of Dietz’s emotional minefield among the way.

Eric Thompson’s Alan Berg provides the few (and necessary) comic respites during the often oppressing drama. Thompson’s chain-smoking, manic-mouthed rendition of the talk-radio personality is deftly underscored with a palpable warmth, a distinct humanity that persists even as he brays irascibly into his microphone. It is apparent in Thompson’s performance that he respects the fact that the victimized Berg was a real person, a man rather than merely a character. The products benefits greatly from this choice.

Kudos are also in order for set designer Michael Mingoia. The floor is decorated with a large-scale reproduction of the Constitution’s calligraphic script–an apt symbol for the degradation the document endures under the hooves of those who use it as a red carpet from which to propagate hatred.

God’s Country closes with a recitation of W. B. Yeats’ poem “The Second Coming,” but to heighten the poem’s relevance to his work, Dietz abbreviates the verse to a tell-all passage: “The blood-dimmed tide is loosed, and everywhere/ The ceremony of innocence is drowned;/ The best lack all conviction, while the worst/ Are full of passionate intensity.”

SCRT’s estimable production of God’s Country, however, has both conviction and passionate intensity.