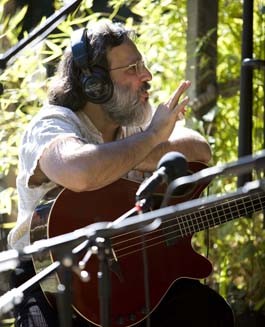 I urge anyone who owns land and wishes never again to experience one instant of boredom, who wishes to live in a continuing state of elation, to deny no one access to that land, and watch what happens.

Let there be no more Morning Stars.

Back in the olden days, like before PCs, iPhones or MySpace, a tall, frizzy-bearded bohemian dreamer “with a nose like a Babylonian patriarch” chanced upon the North Bay. Liking what he saw, he immediately popped for 30 magical hillside acres near Graton in western Sonoma County. The man was a scholar, a teacher, a renowned musician and arranger, a comic, journalist and spiritual quester. He was the freethinking “bigmouth incarnated as Lou Gottlieb, alias Lucky Louie Love Divine, a born entertainer with a heart as soft as mashed potatoes.”

That’s how former Limeliter Lou Gottleib was described by Ramon Senders, Gottlieb’s close friend, fellow musician and communal collaborator. Gottlieb felt his little patch of redwood-dotted paradise was meant—by God—to be shared with every human wishing to share it with him, or at least as many as could fit upon his land. Note I said fit on, not fit in, for as long as Morning Star Ranch had space, all were welcome. Morning Star never did run out of space. But it did run out of time.

Now, four decades since Sonoma County’s legal iron curtain fell down on Morning Star Ranch, MorningStar: The Play, written by Cotati resident Nick Alva, opens May 3 for a short run at Spreckels. The play time-warps its audience back to when members of the unintentional commune played catch with psychedelic-induced fireballs, and Sonoma County Health officials perpetually scoured the property for turds and waste while sheriff deputies hunted up proscribed mood-enhancing substances. But Morning Star Ranch wasn’t simply a Sonoma County phenomenon. Morning Star garnered both praise and damnation across the nation’s media spectrum. providing grist for heated discussions in American living rooms, churches and schools. It even provided one snarky politician a tiny step up his trickle-down ladder to the White House.

Alva bears an uncanny resemblance to his famed protagonist, sharing Gottlieb’s dexterity with the bass guitar to boot. The idea to write the play came to Alva after a co-worker told him that he reminded her of Gottleib, who passed away in 1996. She handed Alva a scrapbook containing newspaper clippings, photos and text compiled by former Morning Star residents over time, and the idea for a play just clicked.

I spoke with Alva over hot chocolate and iced tea at the Redwood Cafe in downtown Cotati. Writing the play was put on the back burner while he and his wife were having children, but the idea was resurrected a couple years later when Alva contacted Ramon Sender in San Francisco.

“When I contacted Ramon,” Alva said, “the T. C. Boyle novel Drop City was out. And Ramon and a lot of the hippies were upset about it because [part of it was] based on the Morning Star story. He felt that [Drop City] was a negative portrayal of what was going on. So they were very leery. Very cautious. But he finally got the sense that what I was trying to do was something positive.”

Alva describes MorningStar as “a large-scale play, elaborate, involved and dynamic. It is a symphony of many voices, an easily accessible story involving humor and beauty.” Add to that dozens of live-performance tunes, a large ensemble cast, eminent veteran stage director Michael Fontaine and actor Steve Fowler, who’s a true-to-life Morning Star friend and neighbor still living just up the road from the property. Actor and musician Dave Struffles as Lou Gottleib teams with Sonoma native Jonathan Van Nuys in the role of cofounder, experimental music composer and writer Ramon Sender, to lead the ensemble.

The story begins in 1966. While the hippie movement rocked on in the city, folk-music legend and Ph.D. musicologist Lou Gottlieb settled into a modest cabin on his Morning Star Ranch, diligently practicing Chopin nocturnes on his grand piano. Gottlieb also inadvertently advanced the next hip-olutionary step toward unrestricted human freedom. By opening Morning Star to all comers, it in theory replaced urban strife and squalor with an entirely free and gentle “back-to-the-land” lifestyle. Edgy city vibes were to vanish amidst peaceful love-centered spiritual questing, be it via art, sex, macrobiotics, yoga, nudity or free-to-all mind-expanding substances.

Morning Star might have espoused Utopia, but it fell gloriously short of the mark. As the Haight devolved into ripoffs, false prophets, bad drugs and violence, so too did ever-tolerant Morning Star open its arms to hardcore bikers, underage runaways, violent ex-cons, the mentally unstable and skid-row alcoholics. Morning Star embraced them as it had embraced artists, musicians, writers and myriad other gentlefolk before them. What was conceived with the heart’s best intentions was dragged to its grave amidst onslaughts of divisive and punitive legal sanctions, and by neighbors from the flip side of the cultural divide who simply wanted Morning Star gone.

“I was sitting in the lunchroom reading this,” Alva said, “when I got to the place in their history when Lou Gottlieb deeded the land over to God. It just hit me—oh my God, this is theater! It was right before we were going into Iraq, so there was this notion in my mind, ‘How can we face these people down?’ Protests didn’t seem to work, nor did letters to the editor. Congress wasn’t working. Then I realized that back in the ’60s, almost 40 years ago, the hippies and the Civil Rights people stood up to the powers that be.”

Alva paused, pulling his focus to the present. “I got the feeling that there is a metaphysical cycle going on, and that’s what this play is about. It’s riding that cycle back up, and it’s almost cresting on a wave, and that the energy of the story of Morning Star wants to be out there into the community in order to initiate change.”

The Morning Star commune, though short-lived, was a booster rocket in humankind’s continuing race for spaces in which to experiment with and evolve community. Its buildings condemned and bulldozed, Morning Star saw its residents cast into the hippie diaspora, though some found permanent refuge on nearby Wheeler Ranch.

Lou Gottlieb deeded Morning Star to God. The courts took this, too, away. Why? Perhaps God’s a hippie. One who never pays his taxes.