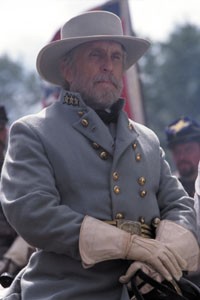 ‘Civil War Trilogy,’ which compiles ‘Gods and Generals,’ ‘The Killer Angels’ (the source material for the ‘Gettysburg’ movie/TV miniseries) and ‘The Last Full Measure.’

‘Gods and Generals: The Paintings of Mort Kunstler’ is an illustrated companion piece to Jeff Shaara’s novel.

Buy the ‘Gods and Generals’ score album by John Frizzell and Randy Edelman.

We are standing in the lobby of a sprawling Cadillac dealership turned theater complex in chilly San Francisco, when an elderly man, face alight with disbelief and wonder, approaches to ask, “Excuse me, are you the Three Musketeers?”

It’s a fairly funny question, given that there are about 25 of us standing around, and that the entire group–except for myself–is garbed in the conspicuous fashion of Confederate soldiers of the American Civil War.

“Ho, ho–Three Musketeers,” the man replies and ambles away, unconvinced that he’s been visited by either gods or generals–a reference, of course, to the movie Gods and Generals, the sprawling 229-minute Civil War epic that we’ve just limped away from after hours and hours in the theater. Based on Jeff Shaara’s bestselling novel of the same name, the film follows General Robert E. Lee (Robert Duvall), Colonel Joshua Lawrence Chamberlain (Jeff Daniels), and Thomas “Stonewall” Jackson (Stephen Lang) through various battles leading up to, but not including, the big one at Gettysburg.

My fellow movie watchers are made up of members from the American Civil War Association, the National Civil War Association, and the California Historical Artillery Society, just a few of the numerous spirited Civil War reenactment groups that take turns staging nonlethal reruns of actual historical battles. Though it is now almost midnight, it is clear that for most of the costumed confederates chattering happily all around me, seeing Gods and Generals tonight was akin to having a religious experience.

“It actually gave me chills,” admits a gray-jacketed, jaunty-hatted Jeff Rawlinson. “And that’s really something, because I’m wearing two layers of wool over a heavy cotton shirt.”

Lucky man. While he was enjoying his chills, I was merely suffering tingles of pain from having my derriere parked too long in the same place. Clearly, I was alone in my anguish.

“It’s a movie a reenactor will love every minute of,” affirms Jim Marsh. Otherwise known as General Robert E. Lee, and looking every inch the part–“I only started portraying Lee because my hair turned white,” he confesses with a laugh–Marsh has now seen the film twice (Jesus, that’s 458 minutes!) and liked it even more tonight than he did the first time. Seated at a table in a nearby cocktail lounge, Marsh sits surrounded by his troops, most of whom can recite–at the slightest provocation–the names of every skirmish and battle in the entire Civil War, and a whole encyclopedia of arcane facts.

“Do you realize,” asks Marsh, “that after Gettysburg, the wagon train carrying wounded soldiers from the battleground was 17 miles long?”

Any criticisms he has for Gods and Generals are admittedly of the nitpicky, only-a-reenactor-would-care variety.

“By the way, General Lee did not drink,” Marsh mentions, sipping a scotch.

After a pause, another quibble is mentioned.

“Did you know that over 65,000 black soldiers served in the Confederate Army?” states Texas-born Paul Toland, looking sharp in the uniform of a Confederate colonel. “Sixty-five thousand blacks, and in this movie we didn’t see a-one of ’em in uniform.” While he’s at it, Toland adds his opinion that, contrary to popular opinion, Lincoln was a certifiable maniac.

“The so called Honest Abe,” he says, “once tried to lock up the chief justice of the Supreme Court for stating that his policies were unconstitutional. No ifs, ands, or buts about it, the man was a tyrant!”

Ironically, Marsh–General Lee himself, who you’d think would still be holding a grudge–doesn’t agree with his fiery colonel.

“Lincoln,” he says, “was an absolutely brilliant human being, probably one of the most brilliant men who’s ever walked this earth. Just read his speeches. This man was a genius.” Fortunately, the debate about Lincoln’s various qualities is cut short by the clock. It’s time to go, and not a moment too soon.

After all, wars have been known to start this way.