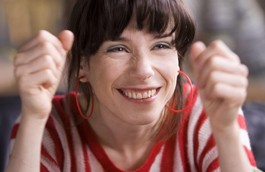 Mike Leigh’s new film, Happy-Go-Lucky, celebrates the sort of figure he usually crushes in the last reel. Sally Hawkins’ Pauline Cross, nicknamed Poppy, is as intoxicated by London as David Thewlis in Naked was poisoned by that city. Leigh and his cinematographer, Dick Pope, start with a tour of the city by bicycle. Throughout the film, we end up pottering around bookstores, lounging at pubs where they keep the aspidistra flying, stopping for a walk at the Camden Lock market and then pausing for a final luxurious crane shot of a rowboat in the Serpentine.

What kind of movie is Happy-Go-Lucky? Leigh takes his characters to the seaside, and he even finds happiness instead of squalor there, stopping for friendly glances at the locals and lingering over a pair of chummy bearded men perched like silent shorebirds.

The merry and bright heroine Poppy is an elementary school teacher who lives off of Finsbury Park Road. Poppy is 30 and single, and seemingly unconcerned about it. She’s a low-rent, neo-hippie version of those exuberantly skinny girls Audrey Hepburn used to play, with a charming overbite and a wardrobe of patterned tights and circus-colored wool sweaters.

She goes out dancing with her mates to Pulp’s “Common People,” bounces on a trampoline for exercise, boozes it on weekends, stays up late and talks trash with her girlfriends. For kicks, she takes a class in flamenco. In these scenes, Karina Fernandez’s dance instructor demonstrates a Monty Python&–worthy Castilian accent. One lesson deteriorates into a hell rant about the kind of man “who runs off with a Swedish beetch who is 22 jears old.”

The L.A. Weekly‘s film reviewer Ella Taylor was miffed at the extremity of the pro-choice argument in Leigh’s last film, the tragedy Vera Drake. Taylor quoted Pauline Kael about Leigh being “a good hater.” Well, so what? So were Dickens, Beethoven, Picasso. The point is that a good hater is a good lover. Maybe the most alarming scene in Happy-Go-Lucky has Poppy burbling like Ned Flanders and lying on a table as a chiropractor snaps her spine.

The mirth and sparkle in Poppy’s hazel eyes, the good, simple heart and the girl’s delight in double-entendres got past my resistance. But the way Leigh films this cheery stork-girl it seems as if her cheer will turn out to be an end in itself. That’s why this film takes some sticking with. The point becomes clearer when Leigh adds some bitterness to complement the sweetness.

Poppy takes lessons so that she can drive the car of her flat mate Zoe (Alexis Zegerman). This starts her regular encounters with a more traditional Leigh figure in the form of one Scott (Eddie Marsan), a frowning, alienated driving instructor, essentially Nietzsche reincarnated—down to the brushy mustache. Scott has a conspiratorial worldview. It seems to have something to do with the Illuminati, but he’s also very worried that the Washington Monument is actually 666 feet high. He can’t bear to be touched, let alone flirted with. In his company, Poppy learns that not everyone can be cheered merely by a pert girl.

The early driving lessons with Scott evince the prime comedy of teaming a cheerful person with a growling grouch—Laurel and Hardy, for example. But Scott starts to lose his own fragile grip. Poppy sees into him, asking good, pertinent questions like a psychiatrist, and she’s also shrewd enough to discover that one of her elementary school students is being beaten by his mother’s boyfriend. Poppy isn’t as silly as she looks. The wide, jack-o’-lantern grin might be a kind of wince, even a way of keeping people at arms’ length.

Since almost everyone in Happy-Go-Lucky is a teacher, you could suppose Leigh is mulling over the proper way to pass on learning. This is commonly a way filmmakers trip themselves up; audiences are resistant if they think a movie is trying to teach them something. Fortunately, Leigh is so subtle that his film about the importance of passing on tenderness may not seem like a lesson. The density of his characters is the result of rehearsal, improvisation and a lack of emphasis over whom the film centers on.

There’s really no such thing as a supporting character in Leigh’s films, and that’s especially true of Happy-Go-Lucky. The characters are so deep that you could have made a number of movies out of this film. But chances are Hawkins would have stolen every one of them.