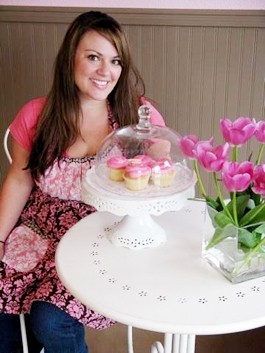 Sift Cupcakery brings the retro cupcake to the North Bay

Stepping into Sift Cupcakery in Cotati, one is immersed in a world of nostalgia-triggering retro elegance. Shabby-chic chandeliers sparkle above the sleek teal countertop. The vanilla-tinged sweetness of fresh-baked batter floats in the air. Luxurious velveteen curtains separate the front room from the kitchen. Like mini works of art, the cakes sit regally behind their respective name tags: “Pinking of You,” “The Sky Is Falling!” and “Chocolatease” are among the sassy monikers with which owner Andrea Ballus has christened her confections. “The fun part is coming up with the names,” she smiles.

This is clearly no frumpy mom-and-pop bakery. The 30-year-old Ballus comes out from behind the counter in a white eyelet blouse, cropped jeans and high heels. A tattoo is barely visible on her ankle. She looks like a lot of fun, and so do her cupcakes. Heaping mounds of creamy, colorful frosting and meticulously applied sprinkles and mini candies adorn the voluptuous cakes. A smiling girl manning the register wears a custom-made pink and black toile-patterned apron, the chic uniform of all Sift employees.

Ballus has carefully tailored the aura of her shop to represent the “new cupcake,” no longer the slightly stale yellow cake squeezed with sugary icing. Now the dessert is a mini palette upon which gourmet chefs can experiment with flavors and appearance. Why not a red velvet cake with cream cheese frosting, or a banana cake with caramel ganache?

It’s no shock that since opening her store in mid-April, Ballus’ cupcakes have been flying off the shelves at $2.75 each. With boutique cupcakeries emerging all over California, from the L.A.-based Sprinkles to Citizen Cupcake in San Francisco, the only surprise is that the North Bay hadn’t been struck sooner. At Magnolia Bakery in New York, the rumored origin of the cupcake mania, customers line up around the block to get them and are limited to purchasing no more than a dozen at a time. An “appearance” on the hit show Sex and the City boosted the shop’s popularity still further.

Now cupcakes and Carrie Bradshaw and Co. are seductively intertwined in the pop-culture psyche. Just ask Ballus, who experienced the Sex and the City phenomenon not long after opening Sift. “The day that the [Sex and the City] movie opened, we were just swamped in here,” she laughs. “All these women dressed to the nines in their New York City outfits, just standing around eating cupcakes and drinking coffee. It was so funny.”

Not that cupcakes are purely a “girl thing.” In a popular SNL skit, comedians Andy Samberg and Chris Parnell rap over the phone, “Let’s hit up Magnolia and mac on some cupcakes,” turning the treat into a laid-back dude’s go-to cure for the munchies. In Sift’s early life, a large number of the customers were male. Now the demographic has shifted more toward moms with kids, but the store still has its male groupies. “A lot of them are buying [cupcakes] for their wives or girlfriends,” she says. “And a lot of them are getting them for clients. Instead of bagels and coffee, they’re serving cupcakes and coffee!”

Ballus should know a thing or two about mixing business and food. The Benicia native acquired a love of baking and experimenting from her father, with whom she spent a lot of time in the kitchen growing up. “There were lots of wasted eggs,” she says, “a lot of wasted sugar and flour.” She spent three years in Las Vegas, working first in radio and then as a fine-dining specialist for San Pellegrino. She noticed that cupcake shops were popping up everywhere. “I just thought it was a great idea, and I really wanted to move home,” she says. “I knew there was a niche, because I got married in Sonoma in October and I couldn’t find cupcakes here. Not good ones.” Apparently what happens in Vegas doesn’t always stay in Vegas, at least not a smart business idea.

But the question of why cupcakes? still remains. “I think they’re just super cute,” Ballus says, “and people have a lot of fun with them. It’s like a throwback to when you were a kid, or when your parents were kids.” Perhaps, but there’s no denying that these treats are packed full of butter and sugar. Ballus is coy about divulging the calorie count of one cupcake. “We don’t really need to know,” she says. “We love them. I think we all eat our fair share of cupcakes around here, so we definitely don’t wanna know.” (Spoiler warning: a “typical” homemade cupcake weighs in at around 150 calories; Sift’s, being more generously proportioned, are probably a bit more.)

Gretchen George, senior study dietitian at the Stanford Prevention Research Center, says, “The idea of portion size is starting to hit home with lots of consumers, and a cupcake is a reasonable portion size for a discretionary calorie allowance in one day.” In other words, the trick is stopping at just one.

Ballus has been working hers off the old-fashioned way. “In the beginning, it was 14- to 16-hour days. Get home at 11pm at night and have to get up at 4 in the morning,” says Ballus. But her mom and loved ones have supported her every step of the way. “My girlfriends were totally with me,” she smiles. “The alarm would go off at 4am, and we’d be like, ‘Oh my God, we’re going to have to do this for the rest of our lives!'” Husband and bar/restaurant manager Jeff Ballus helps out too. “He comes and does the things that we girls don’t want to do,” says Ballus. “He gets the desperate phone calls from us. ‘Jeff, we can’t do this! Can you go to the store and pick up the hundred-pound bag of flour?'”

Now that things have calmed down slightly, Ballus is basking in the rewards of her efforts. Off the top of her head, she estimates that Sift sells about 300 cupcakes a day, though some Saturdays see off up to 600 or 700 cakes.

The future looks bright. Sprinkles stores reportedly sell about 1,500 cakes per day, while Buttercup Bakery boasts sales of 2,000 to 3,000 daily. But Sift isn’t in a hustle-bustle city like New York or on some swanky Beverly Hills strip. “Probably the biggest obstacle was worrying about my location,” Ballus admits. “We’re definitely off the beaten path a little bit. But it’s a destination. People know they’re coming to get cupcakes. And it definitely hasn’t hindered our business in any way.”

Ballus doesn’t believe the cupcake craze is just a flash in the pan. “I mean, there are shops just dedicated to pretzels. Who would have ever thought?” she laughs. But unlike pretzels or doughnuts, the “retro cupcake” has become an up-scale obsession, eaten by Gucci-bag-toting socialites and ultracool hipsters, not truck drivers and Costco customers. And it’s showing up on everything from baby togs to camisoles. Among those capitalizing on the craze in the high-end demographic is Johnny Cupcakes, a trendy Boston-based clothing company that sells merchandise bearing custom cupcake logos at prices ranging up to $75.

Ballus’ own craving for the miniature cakes stems from imagined childhood angst. She jokes, “You know how your parents made you feel so cool if they brought cupcakes to your class on your birthday? I never got those. But I always wanted them, and I think that’s where my whole obsession with cupcakes comes from.”

Brodie Jenkins
Previous articleLive Review: Tom Waits at the Ratcellar – Dublin, Ireland
Next articleThe Boys are Back in Town