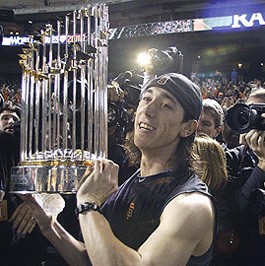 We all watched the videos online last year, gathered around our laptops. The footage was grainy, the light dim in the dead of night, but the joy was clear in everyone’s faces. A jubilant reunion full of tears of happiness and hugs that just weeks prior seemed almost impossible. It had happened. Finally, it had happened.

I’m not talking about the Chilean miners’ rescue. I’m talking about the San Francisco Giants’ return to AT&T Park at 4am, after winning the World Series in Texas. The huge crowd, up all night waiting for their arrival. The high-fives between players and fans. And the most iconic image of all: Giants’ manager Bruce Bochy reaching over the barricades and Brian Sabean offering the World Series trophy for all to see.

The trophy has been on a tour of California since, and it hits Sonoma and Santa Rosa this Friday to what will surely be a sizable gathering of Giants faithful. No, fans won’t be able to touch it. Yes, fans can take pictures—but only up to a point in the line, when a professional photographer snaps an image available afterward for purchase online. No, Tim Lincecum won’t be there. But, yes, it is the real-live trophy.