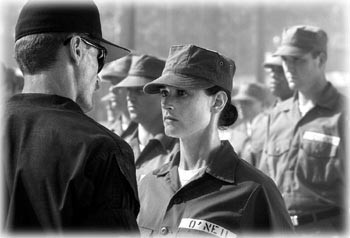 IT IS A SUNNY, hot day in Southampton. Linda Bird Francke–now on the phone–has just returned from a local air-conditioned theater screening of G.I. Jane, in which Demi Moore sweats, shivers, shaves her head, does one-armed pushups, is beaten up, kicks her commanding officer in the testicles, and drags wounded male comrades to safety through a veritable blizzard of Libyan bullets.

The as-yet fictional tale of the first female officer to be allowed to train in the elite Navy SEALs fighting force, G.I. Jane offers more, obviously, than those parts mentioned above.

“Those are pretty much the high points, though,” affirms Francke, with a deep, gleeful, barklike laugh that is simultaneously disarming and just a little intimidating. Francke (pronounced “Franky”) is the author of a deservedly high-profile new non-fiction book, Ground Zero: The Gender Wars in the U.S. Military (Simon & Schuster, 1997), a work that was recently excerpted in Time magazine along with an exposé of ousted Air Force 1st Lt. Kelly Flinn.

Ground Zero is an eye-opening, sharply written exploration of the roles that sex and gender play in our nation’s modern armed forces. It paints a fascinating picture of an age-old institution suddenly at war with itself, as the military’s time-honored dependence on souped-up, testosterone-fueled masculinity has slammed headlong into the treacherous sexual politics of integrating a once all-male armed force.

“The movie raised 7,000 issues,” Francke says. “Issues that men in the miltary always raise, and one of the first ones is, ‘I don’t want to be in a foxhole with anybody who can’t carry me out!’ They love that bit.”

Another issue, mentioned by a male officer choosing to lecture Moore while she showers, is the fear that men will put themselves in jeopardy to assist fallen female trench mates.

“Which made it so satisfying,” she laughs again, “when that same guy, later on, is saved [by the Moore character]. ‘I’ll never live this down,’ he says. I thought it was a hoot. It was terrific having this bionic woman heroine. Why not? It’s fun to have heroic female characters, no doubt, and to see this woman kicking butt was just plain fun.”

The brunt of the raw brutality of SEAL training–and the determination with which Moore’s character endures it–is borne largely, in the film, by recruits facing the tortures of SERE school (the military’s Search, Evasion, Resistance, and Escape program), in which combat conditions and simulated POW situations are re-created in all their dehumanizing glory.

“They do lock you in tiger cages at prisoner-of-war camp,” Francke affirms, describing features–such as strip searches and verbal sexual abuse–that were left out of the film. “They do punch you repeatedly in the face. One Navy lieutenant I spoke to said she was at a great disadvantage at prisoner-of-war camp because she had come from a happy and functional family. She’d had never been hit. So that was a disadvantage, because suddenly she was being hit in the face for the very first time. Whereas people who’ve come from abusive families say, ‘It really wasn’t that bad!’ Makes you shudder, doesn’t it?”

Earlier in the week, while setting up this conversation, Francke made the remark that most people would be eager to see G.I. Jane primarily for the opportunity to watch Moore’s head get slammed against a wall. When I remind her of the comment now, she doesn’t back off.

“Yes, I think that’s true!” she says, forcefully enough to suggest that she has given some thought to the subject. “It’s taboo to hit a woman, right? Yet I don’t think there’s a man on earth who hasn’t wanted to slug a woman at some point, but he’s been conditioned not to.

“I think that’s one of the dirty little secrets that lies in the heart of many men,” Francke suggests. “‘Gee, I just wish I could slug her,’ and here, finally, is a big screen, fully sanctioned slugging.”

The Navy, not surprisingly, refused to cooperate with G.I. Jane‘s producers, and there are suggestions that the Navy might fear increased pressure to admit women to the SEALs if the movie is embraced by the public.

“I’ve never seen any reason why women shouldn’t be in the SEALs, if they can qualify,” Francke says. “I don’t think gender should be the dividing line here. If they have the same skills and qualifications as men, why should they not be allowed to do it? The reality is that women have been combatants in various wars since the beginning of time.

“I think,” she continues, “that most men don’t want women to succeed because if women can do it, it means that it’s not that big a deal for men to have done it. In the military, the resentment factor is enormous when a woman in the ranks begins to gain a particular level of success or renown. Look at Kelly Flinn!

“It was so reminiscent of Kelly Flinn when one guy in the movie said, ‘Big symbols make big targets.’ Well, God knows that as the first female B-52 pilot, Kelly Flinn was a big symbol, and she made a big target, and she sure took a big fall.”

I ask Francke if she can foresee a time when women will be successfully integrated into the military.

“No matter how you slice it, women have been successfully integrated into the military, if not the SEALs,” she replies. “They’re there, they’re commanding ships, they’re flying fighter planes. What they haven’t been, though, is assimilated; they haven’t been accepted as true members of the club.

“And you know what?” Francke concludes, a rueful chuckle punctuating the thought. “I really don’t think that’s ever going to happen.”