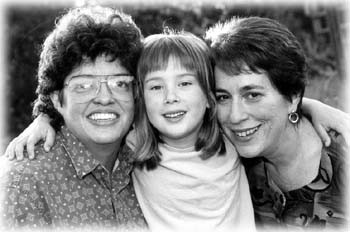 LIKE A LOT of contemporary kids, 6-year-old Cora Smith-Tobin carries the surnames of both her parents. And, like many children her age, she is growing up in a household that does not include a father. Instead, she has two mothers. At a time when the conventional mom-dad-and-kids family unit is becoming increasingly rare, lesbian households with children are less and less unusual. Still, on this Mother’s Day, local lesbian moms are experiencing mixed reactions to their situation. For example, Barbara Tobin, Cora’s birth mother, recalls taking her in for a baby shot, “and the nurse said, ‘Which one of you is the mother?’ We said, ‘We both are.’ She just said, ‘Oh, OK,’ and carried on.

“We have an attitude that we expect to be accepted and that really plays out,” she continues. That [acceptance] is what we get back.”

Adds Cass Smith, Cora’s other mom and Tobin’s partner for the past eight and a half years, “The only time it comes up that there are two moms instead of a mom and a dad is when you go into a brand-new situation, and [find out] how are people going to react. Ten minutes later, that’s over with.”

Yet, not all local lesbian households feel they can be so open. Lynn Anderson and Carla Bond are both public school teachers who share a 7-year-old daughter. Even though they live some distance away from the district that employs them, they do not feel safe fully acknowledging their relationship at school.

“It’s hard not being able to be out,” Anderson says. “I have to be more guarded. It would be nice to tell the whole story and feel comfortable with that.”

Ironically, they have discovered that they do have to reveal themselves to other teachers in their home neighborhood. “We have to come out to Andrea’s teacher every year,” Anderson says resignedly. “And soccer coaches,” Bond adds. “It hasn’t been a problem for us, really, but it’s something that other families don’t have to do.”

“It’s a process of continually coming out,” agrees Kathy Allen. “And every time I do that, I never know what reaction I’m going to get.”

She has come to realize that it is something her young children–she has two, both with her lesbian partner–will also have to share as they get older. “It’s a process that just goes on and on,” she explains. “As school goes on and my kids make new friends, they’re going to be coming out, too.

“It’s a conversation they’re going to be having hundreds of times in their lives. It’s not something you get to do once and then you’re done with it.”

For lesbian moms and their children, questions about the absence of a dad in the house crop up soon after kids hit school. “Orphan? Adopted? She doesn’t know what these words mean, so she comes home asking,” says Bonds ruefully.

“We try and beat her to it, but you never know what kids are going to come home with.”

Anderson recalls one time her daughter blithely volunteered, “I have two moms,” to a stranger in a local department store, leaving her mother to deflect the other woman’s misdirected sympathies abut the difficulties of being a stepmom.

One coping resource that all three of these households share is membership is a loose association of lesbian families called the Lavender Storks. Tobin helped form the group when she was pregnant in 1990 as “a support group with the idea that as we started having kids, the kids would have each other to know.”

Begun with barely half a dozen members, the group now has a mailing list of almost 30 households for their quarterly get-togethers.

Parenting teenagers is a whole different experience, one that June Grayson. and Beverly Welsh are going through for a second time. Having already shared Grayson’s two younger biological children through their late teens in the early ’80s, the couple is now repeating the process with a pair of teenaged foster daughters, girls who choose to become a part of the all-female household.

“They have been totally accepting, absolutely great about it,” Grayson says. “Their attitude with their friends has been, if they don’t like it, they don’t have to come to our house. Or using it as an education thing.

“Anytime one of the kids would make a disparaging remark, she would talk about us.”

After a pair of unsatisfactory previous foster placements, “a lesbian couple seemed like an alternative idea, quite reasonable,” says the couple’s 15-year-old foster daughter.

And, she adds, her friends have also approved. “A lot of them have seen the way I’ve been with my other foster homes, and they see me now, the difference. They really appreciate them, not because they’re lesbians, but because they’re doing so well with me.”

Welsh suggests that one reason the placement is working lies in the lower level of conflict she sees as characteristic of lesbian relationships. “Almost every straight couple we know, there are issues that come up that seem to us to be part of the fabric of male-female relationships. We treat the girls pretty much the way we treat each other. There’s no yelling and screaming; we don’t believe in it.”

At the same time, she adds, they recognize that male role models are also important. “I think the male approach to things and the male influence, for girls, is often very valuable. It’s one of the things we need to make an effort to have for them.”

But she suggests that growing up in an alternative household “may make the whole issue of ‘who am I, sexually?’ a little easier for them.

“It may make the teen years more comfortable, because they know they can discuss it openly.”

But all the mothers interviewed for this story agree that any issues they encountered due to sexual orientation pale next to the day-to-day details of child-rearing.

“One of the hardest things for me is having to work full-time and be a parent,” sighs Bond, echoing a lament of working parents everywhere.