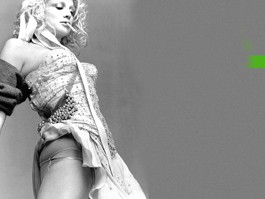 Once again we stand on the precipice of a new year rife with musical possibility. What old ghosts will haunt us? From whence emerge the saucy upstarts who will burst onto the scene, gasping minty-fresh sounds that will obliterate the cynicism of nay-sayers and reawaken the dead-bird souls of burnouts? We have just a few suggestions for the future.

In 2008, the Bureau of Better English Usage will bar music critics from using the term “shimmering pop” on the principle that pretending a bunch of fairly generic music which generally fails to shimmer even a little as a genre is both lazy and inaccurate. (Furthermore, employing the phrase “shimmering pop confection” will become a capital offense.)

Televised awards programs will require all live performers to take drug tests; those who test negative are denied the right to perform. Backstage platters of lunch meats and lukewarm melon pieces will be replaced with coke-lined mirrors and buffets of crack pipes, and the chocolate drained from fondue fountains to be refilled with rubbing alcohol. After all, what’s better for ratings and YouTube viewership than the very public meltdown of a drugged-up has-been?

The new Apple BioPort will debut. The BioPort will plug directly into a gelatinous bodily orifice (available for installation at your local Apple store) and allow users to download music, photos and video files directly to the brain, replacing memory previously occupied by multiplication tables and state postal abbreviations. The limited-edition Billy Corgan/Smashing Pumpkins BioPort will come with an exclusive extra dose of pompous self-importance.

Congress will pass a constitutional amendment allowing foreign-born citizens to run for president with the hope that Arnold Schwarzenegger will supplant Mitt Romney’s flagging popularity and become the frontrunner for the Republican Party. But the Democrats, fearing that Americans want neither a woman nor an African American in office, will seize the opportunity and announce Bono as their candidate, with the Edge supporting him on the ticket. A showdown of massive proportions will ensue, with the Schwarzenegger campaign showing the better TV ads, but the Bono campaign getting the better theme song, “Pride (In the Name of Love),” which has nothing to do with the American presidency but everything to do with stirring the emotions.

Britney Spears’ head will explode, spraying a throng of paparazzi lenses with scalding oil and tiny metal gears, and there will be some ‘splaining to do. Britney’s reps will reveal that she is actually a prototype entertainment droid whose programming backfired, just like HAL 9000’s did in 2001. It will be revealed that Britney’s parents, Disney, Justin Timberlake and her record labels were in on it the whole time, though, unsurprisingly, K-Fed will not have had a clue.

It will be busy year for Rhino Records, whose Led Zeppelin Box Set Box Set will include roughly a thousand CDs, plus a 2,500-page volume of liner notes by William T. Vollman.

At the premier of the Iggy Pop biopic The Passenger, Elijah Wood will be attacked on the red carpet by a mob of grizzled Stooges fans. Thinking fast, Wood will slip on the burdensome but momentarily handy One Ring to Rule Them All, become invisible and escape.

Bob Dylan will fall asleep on the sofa while watching a DVD of I’m Not There that he picked up at Blockbuster. “I don’t know,” he’ll say in a later interview. “It was confusing and overrated.”

Courtney Love’s new album, How Dirty Girls Get Clean, will come out, but no one will buy it, because . . . ick. Meanwhile, she and Yoko Ono will start a support group, Hated Widows of Lauded 20th-Century Rock Musicians.

The term “emo” will officially lose all meaning when, at 12:30pm on March 21, 2008, my 65-year-old conservative veteran father will use it in casual conversation.

Cassette tapes will once again fail to come back into retro-vogue on a wide scale, and will still be easily purchased at garage sales, thrift shops and used record stores for less than the price of a candy bar. This means that, for the microscopic anti&–Apple BioPort contingent who still cling to Walkmans, the world is their oyster. But only if they like Rob Bass and the lesser albums of Heart.

Hip-hop will continue to flourish, increasingly revealing itself to be the most relevant, malleable and creatively fertile genre of pop music in our day. Meanwhile, straight-up rock will be, for the hundredth time, assumed dead, only to resurrect itself fiercely in some quiet pocket of the world in a way no one can presently predict.