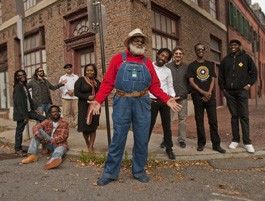 From Street to Stage

In a testament to the power of the internet to make the awesome possible, the Playing for Change Band began when cofounder Mark Johnson ran into street performer Roger Ridley playing Ben E. King’s “Stand by Me” on a Santa Monica sidewalk. Johnson was inspired to record Ridley’s version, combine it with the sounds of other artists playing music in communities around the world, and multitrack all of their interpretations of the classic song into one video and post it on YouTube. Nearly 25 million views later, the project has exploded into a band, an international tour and a foundation dedicated to keeping cultural traditions alive through music schools.”The video got such a wide response because it didn’t try to hide the truth of the musicians,” says Mohammed Aludi, one of the 10 international musicians in the band. “It revealed the truth of the music to the world.”

Alidu studied the talking drums of Northern Ghana from the age of three and carried those skills with him when he met Johnson, who was in Colorado producing Playing for Change’s first benefit concert in 2007. Upon learning of the band’s belief that music has the power to break down walls and shorten distances between people, Alidu didn’t hesitate to add his talent to the multicultural swirl of uplifting cover songs.

“It’s a very great honor. When I was young, I would go to the market in Ghana and beg and play for food, so this is a life-changing dream come true,” he says. Back home, Aludi’s family has donated a tract of land to the foundation to build a music school. The drummer hopes to share the band’s mission of “connecting the world through music” with children in his hometown.

“So much of who I am has come from music,” he testifies. “All the traveling around the world—my drum takes me there. I want that life for everyone in my community.” With that in mind, a dollar from each ticket sold goes directly to the foundation, in addition to a percentage of the band’s total profits. The Playing for Change Band comes together on Friday, Oct. 29, at the Mystic Theatre. 23 Petaluma Blvd. N., Petaluma. 8pm. $30–$35. 707.765.2121.