.From Border Town to Healthcare Frontiers

Doctor Toni Ramirez, MD puts justice at the center of her practice in her office and community 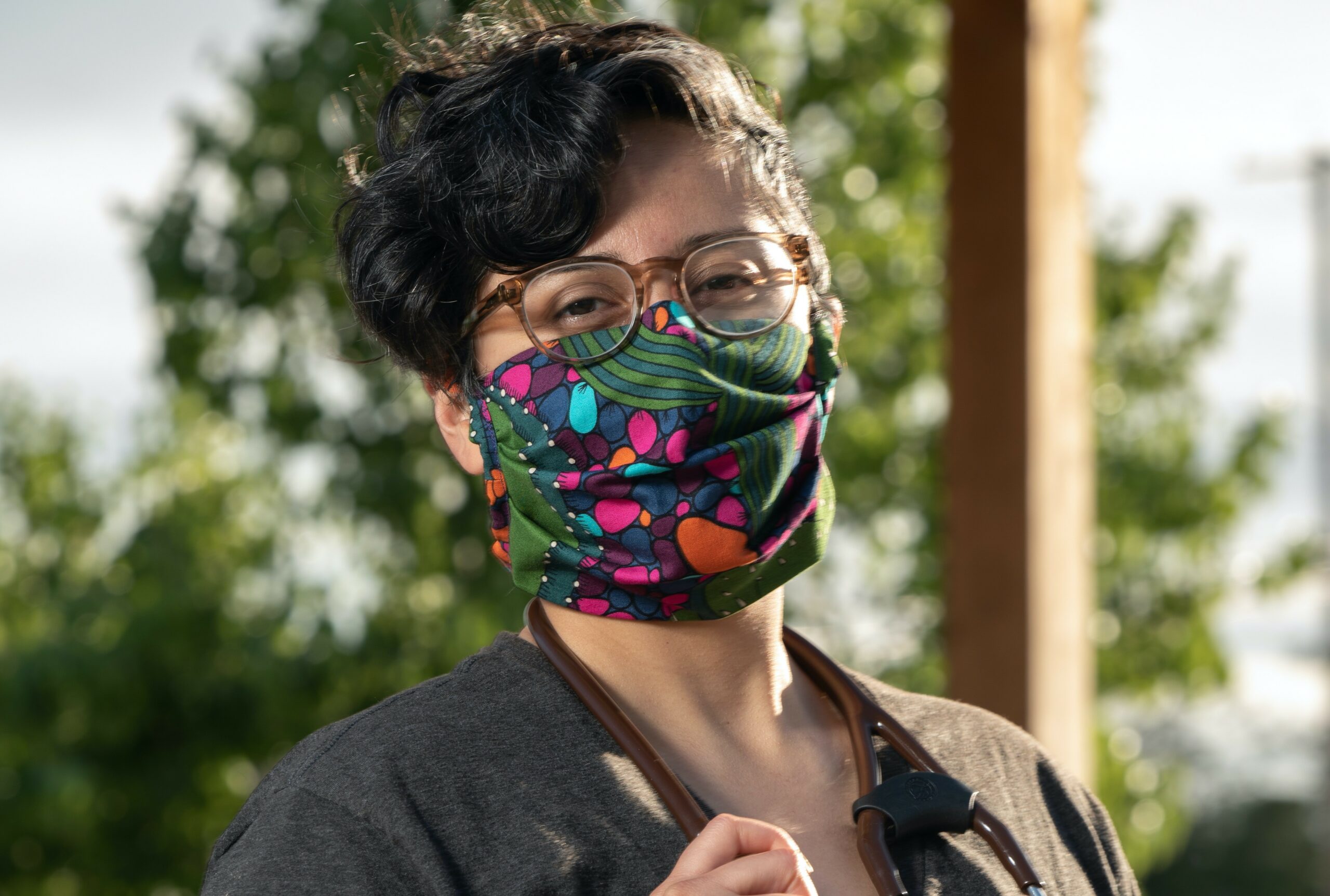 Dr. Toni Ramirez entered medical school as an act of rebellion. That, and she wanted to help people. In high school in El Paso, Texas, her guidance counselor mocked her ambition to become a doctor, despite the fact that she was at the top of her class. A Latinx child in a border town, Ramirez thought, “If you’re telling me I can’t do this, what are you telling my peers who aren’t at the top of the class?”

At 18, she was accepted into an eight-year program at Brown University which included an undergraduate degree followed by medical school, permitting that she met certain requirements (which, of course, she did).

Today, Ramirez is a Family Physician at the Lombardi campus of Santa Rosa Community Health (SRCH) in Roseland, California. Thankfully, she says, she enjoys the work of being a healthcare provider. At SRCH, Ramirez runs the Gender Clinic, providing care to transgender patients.

“As a member of the LGBTQ community and somebody whose mission in medicine is to work with the most impacted and disproportionately affected by health inequity, it was an easy decision to do gender-affirming care,” says Ramirez. “There aren’t enough providers doing it. And the health disparities in the trans and nonbinary community are so vast.”

Competent trans healthcare can be hard to find and difficult to access, so SRCH being able to serve anyone—insured and uninsured—is remarkable. Clients travel from as far as Willits and Marin.

Despite the powerful work she does, Ramirez quickly learned that there were limits to how much she could help people as a physician. She sought to create space for activism beyond her day job. When Trump was elected president in 2016, she and about 40 other providers around Santa Rosa came together to form Health Professionals for Equality and Community Empowerment (H-PEACE).

H-PEACE is composed of family physicians, psychologists, nurses and nurse midwives. Most founding members came to the table with at least one area of focus in mind for advocacy. Topics included health access for all, immigrant rights, reproductive health, LGBTQ+ rights and environmental protections.

Ramirez had long imagined creating an organization through which healthcare professionals would make public statements, offer commentary about important community issues, make endorsements and consult with local government officials. She believes that Trump’s election resulted in a bigger group of providers feeling called to activism.

“We met out of fear of not being able to provide the care needed for vulnerable communities,” says Ramirez.

Ramirez says that, because people are vulnerable at the doctor’s office, providers often have a unique window into their patients’ lives. But, she says, limited time with patients limits a provider’s impact. She offers an example of treating someone who has diabetes.

“I get 15 minutes for a visit, so I may learn about a lot of factors that impact a person’s health—their immigration status, their low wage job, maybe they don’t have insurance so they don’t get their meds covered. They have chronic stress, so they’re depressed and it’s affecting their sugar levels,” Ramirez says.

There’s so much happening outside the four walls of the doctor’s office that Ramirez says prescriptions alone cannot treat.

She explains, “Providers see how many intersections of people’s lives affect their health, but we’re so overwhelmed in this for-profit medical industrial complex that most doctors don’t look up and say, ‘Hey, do you know how horribly high rent is impacting the health of our patients?’”

Perhaps H-PEACE’s greatest accomplishment has been finding and forging spaces where providers can use their voices powerfully to advocate for patients beyond one-on-one interactions.

“Being a doctor, it carries weight when I say that what my patient needs is a livable wage or an equitable rent in order to treat their diabetes,” Ramirez says.

H-PEACE supported North Bay Jobs for Justice’s campaign to raise the minimum wage, which has passed in Santa Rosa, Petaluma and Sonoma.

There aren’t many groups like H-PEACE in the U.S., so the group didn’t have a specific model in mind when they started. They took some inspiration from unions.

Mara Ventura, executive director of North Bay Jobs with Justice, met Ramirez when she attended the first H-PEACE meeting that Ramirez led. Familiar with healthcare unions, Ventura provided mentorship to H-PEACE on how to organize.

“It was really eye-opening to see how actively nursing unions were engaged in the fight for Medicare for all,” Ramirez says.

Almost immediately, H-PEACE became an inspiration to providers elsewhere. A doctor in Salinas looked to them when advocating for the healthcare of farmworkers in his area.

Then, during midterm elections, members of H-PEACE spoke on national panels about how to get healthcare providers engaged in community activism. Pro-tip: Offer food and invite their kids.

Ramirez says it’s often that simple. “Leaving work, we’re tired and want to see our families. If you want to get doctors to show up, feed them and allow them to bring their children.”

The value of H-PEACE, according to Ramirez, is adding a healthcare perspective to social justice issues and, in turn, learning from community organizations doing health equity work. H-PEACE has forged relationships with leaders in the community, including Ana Salgado of immigrant rights organization Comité Vida, Richard Coshnear of Vital Immigrant Defense Advocacy and Services (VIDAS) and Sonoma County Supervisors.

Ramirez says that she learns the most by showing up in the community as part of the community, not just as a doctor. It’s a balancing act between leveraging the weight it carries to speak as a provider and simply being present as a fellow queer person or Latinx person listening to community leaders.

“I came from a place where I wasn’t supposed to be a doctor—this isn’t the trajectory people thought I should take,” says Ramirez. “So I work really hard to reduce the power dynamic between doctor and patient or doctor and community.”

Ramirez says that elitism in medicine hinders providers’ ability to do true healthcare.

“Especially during this pandemic, I hope medical institutions will acknowledge the importance of raising up our humility and taking the lead from community members who may know more about how to address health inequities than providers,” says Ramirez.

Members of H-PEACE helped to set up care at emergency shelters during Sonoma County’s fires in 2017 and 2019 and coordinated for volunteer providers to come up from the Bay.

That said, “It’s hard for H-PEACE to be H-PEACE during a fire or our Covid19 pandemic,” says Ramirez, because providers are integrally involved in these crises through their daily work.

After several years in Santa Rosa, Ramirez is heading home to El Paso before 2020 is over. Mara Ventura will be moving with her—the activists are engaged in more ways than one.

“I proposed to her via flip chart,” Ramirez says, laughing. “She taught me the power of flip-charting and organizing, so that’s how I asked her to marry me.”

“We’re excited for new challenges,” says Ramirez, noting that they will focus on the border, immigrant- and asylum rights.

Though it was always her plan to eventually move home, it was important to Ramirez to stay in Santa Rosa long enough to ensure that H-PEACE would take root and SRCH would have a provider to continue gender-affirming care.

The Gender Clinic hired Dr. Arunima Kohli to take over for Ramirez, who is thrilled that they have found a physician who is a woman of color, part of LGBTQ+ community and who has a background in providing trans healthcare in Sacramento and at UC Davis.

H-PEACE thrives in the hands of several founding core members and has recently welcomed two newer members to its core team.

Ramirez is eager to bring home the experience she’s gained as a doctor and community organizer in Santa Rosa. She also can’t wait to eat her mom’s cooking.