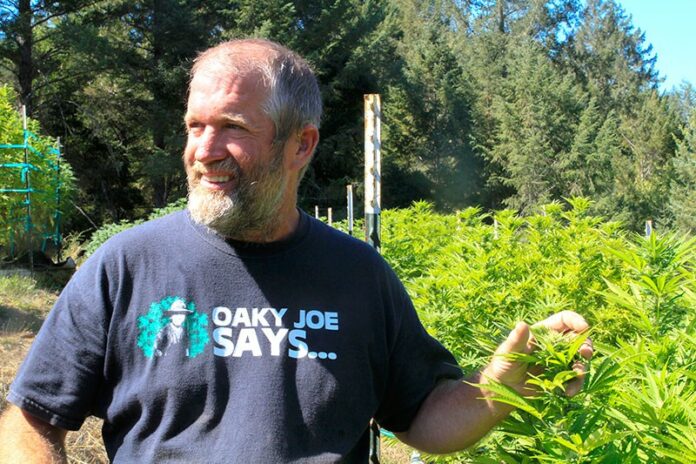 On a Sunday morning in November, four vehicles from the Sonoma County Sheriff’s Office climbed Old Cazadero Road. At the same time, a convoy of a U-Haul and three other vehicles descended the road. The passengers in the convoy—many of them medical marijuana patients—hoped to reach River Road before law enforcement intercepted them.

In the U-Haul that “Oaky” Joe Munson had rented explicitly for the occasion, he and his team had stashed 30 pounds of marijuana that they taken, or stolen or liberated (take your pick), from an illegal, unpermitted marijuana farm at the top of the ridge.

Several of Munson’s San Francisco patients who were suffering from AIDS had been unable to drive to Sonoma. But they still wanted their medicine.

No doubt California’s marijuana czar, Lori Ajax, would like Munson to disappear from the cannabis landscape, not only because he has taken the law into his hands, but also because he boasts about it. In his mid-50s and a ball of energy, he probably has years ahead of him.

Munson and his crew didn’t make it to River Road before the deputies. For two hours, there was a standoff in the woods while the sergeant and his deputies asked questions, examined IDs and wrote down names, addresses and phone numbers.

The entire escapade was the brainchild of Munson himself. A longtime marijuana grower, friend to medical-marijuana patients and a legend in outlaw circles—as well as a husband and father—he wanted what he insisted was rightfully his. He had a verbal agreement, he said, to grow marijuana with his business partners. In return for his efforts, he would receive a percentage of the crop.

Strictly old-school, with old-school methods, he would not likely survive in the brave new world of legal adult use of marijuana, but he was still riding high that Sunday.

During the previous summer, Munson had run afoul of his partners, or they’d run afoul of him. In any case, he was thrown off the property, told never to return and informed that he had no legitimate claim to any of the marijuana he’d helped cultivate.

Munson consulted with Victoria Shanahan, one of several lawyers who have represented him and who recommended that he not “raid” the farm. She reminded him that he might be arrested for trespassing. Munson went ahead anyway. It took him a couple of weeks, but he recruited Sonoma County marijuana cultivation maven Alexander Carpenter, along with two beefy friends and half a dozen medical-marijuana patients. Then he led his convoy up Old Guerneville Road and into the woods.

“We’re not taking any guns or weapons with us,” Munson explained to one and all. “If they start something, we’re going to leave.”

Everyone, including the beefy fellows, agreed. But when Munson and his crew arrived at the primitive encampment in the woods and began to remove containers filled with marijuana—and load them into the U-Haul—there was an altercation. Words were exchanged and someone threatened to kill Munson.

Munson had invited me along for the ride and urged me to write a story about what Carpenter would call “the afternoon adventure.” I scribbled madly in my notebook and at the same time witnessed the altercation, though I was too far away to determine who started it. Then it was time to beat a retreat.

On the way downhill, I sat in the U-Haul with Munson and Carpenter, a self-defined “expert cannabis consultant,” who had come to observe the event and stay detached, though he didn’t entirely succeed. When the altercation began, he emerged from the U-Haul and drew close to the action.

Munson, Carpenter and I assumed that the police would be waiting for us near the bottom of the road.

“I’d rather that the sheriff have the weed than those thieves,” Munson said. He added, “They didn’t hide the crop like I told them to. They made it easy for me to take what rightfully belonged to me.”

The first sheriff deputy on the scene blocked the road with his vehicle and approached Munson, who must have looked like the ringmaster.

“What’s going on?” the officer asked in a nonthreatening tone of voice. He explained that he was responding to a 911 call about the theft of a computer.

Munson explained that he had come to collect a debt that was owed him, and that no one had taken a computer. Then he voluntarily opened the U-Haul and said that the containers were filled with marijuana destined for patients. The officer nodded his head and said that if it were medical marijuana, it would presumably be given away and therefore didn’t have any cash value. He implied that no one would be arrested.

When I showed my media credentials and asked the commanding officer if he would be willing to answer questions, he replied, “I’m not giving a press conference.”

Then he went up hill to investigate, leaving Munson and his crew under the supervision of two young officers.

“Stuff like this happens all the time,” one of the sergeants said.

“It’s a common occurrence,” said another.

“I voted to legalize weed,” said another deputy. “I hope some day it’s in the same boat as tobacco and alcohol.”

When Munson said that his marijuana business was “farm to patient,” a deputy smiled and said, “That’s the way to do it.”

One of the medical-marijuana patients asked how he thought the matter would be resolved.

“I’m not sure,” said the sergeant. “My commanding officer has a lot of leeway and there’s a huge gray area.”

He added, “It’s hard to know what’s legal and what’s illegal these days.”

Not surprisingly, it didn’t look like a huge gray area or illegal to J.P., a medical-marijuana patient who had survived cancer. Nor did it seem like a gray area to the three women—Denise Lindquist, Helen Starling and Rene Bullock—who stood close together the whole time and who told the officers they just wanted their medicine. Lindquist has MS and breast cancer.

“The biggest thing in my life has been medical cannabis,” she explained. “Experimenting with strains has been an ongoing process. I am getting closer to the right cocktail that will help me have a better quality of life. Joe Munson has been helping me.”

Helen Starling has cancer of the uterus. Rene Bullock has cancer and brain lesions. All of them, including J.P., who had survived stage 3B melanoma, insisted that marijuana reduced their pain.

“Medical marijuana helped me get off opioids,” J.P. said. “Pot also helped me through my angst-ridden teen years.”

After an hour or so, the commanding officer returned with the names and the contact information for the growers on the ridge. Then he told Munson and the crewmembers they were free to go with the marijuana. Apparently, no one on the ridge was willing to file a complaint.

“You took the law into your own hands,” a patient told Munson. He nodded his head and said, “Maybe so, but the whole point was to get the marijuana to those who need it.”

Munson climbed behind the wheel of the U-Haul. The convoy moved out and the deputies moved on.

“Times have changed,” Munson said. “Five years ago this never would have happened.”

Carpenter said, “The police think of themselves as heroes fighting crime. It would not have looked good on their record if they had arrested some old ladies who have cancer and who use marijuana as medicine.”

At the end of the day, no one had been arrested and the crop had not been confiscated. Munson’s law prevailed and Munson’s patients received their medicine.