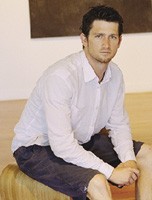 Made in the North Bay:

Stepping into the blacksmith’s forge in the heart of San Francisco’s SOMA district is like taking a step back in time. A power hammer made in 1910 lumbers imposingly next to the forge itself, which heats metal to 2000 degrees F through a natural-gas fire. Two men are putting the finishing touches on a beautiful bronze balcony: master blacksmith Angelo Garro and his apprentice, Jeff Burwell.

The 28-year-old Burwell, a trained painter and sculptor, warns the visitor, “Watch that saw. It has seven horsepower and can cut through anything.”

Not exactly fitting the image of a sweating, barrel-shaped blacksmith covered in coal dust and tattered rags, Burwell–who hails from Healdsburg–smiles. “Blacksmiths used to do all of this work by hand,” he explains, “which is why you get this image of a huge, muscular blacksmith when you think of that profession.” He laughs, “Today, all the hammering is done on the machine.”

Pulling out a pounded brass rod from a jumble of metal pieces, he hefts it in his hand.

“This is the first project I ever did with Angelo,” he says proudly. The once-round brass bar, which was reduced from half an inch to five-eighths, is beautifully hammered into a square length, the little strokes from hand-finishing on the anvil catching the light like a prism.

Malleable bronze is used most often at Garro’s Renaissance Forge in SOMA. The intricately detailed work is begun by creating a stainless steel jig that the bronze pieces are then worked around. Because all the work is hand-finished, each piece looks just a little bit different.

Like any dedicated craftsman, Burwell takes his work seriously. As a first-year art student, he never thought he’d be working as a blacksmith after graduation, but when he reflects on his first metal-working class it seems obvious that in metal lies his passion.

“It just gelled so fast,” Burwell says. “It’s the immediacy of welding, and hammering. It’s almost like Legos.”

After graduating from the California College of the Arts in San Francisco, Burwell burned out. So he hightailed it to Healdsburg and worked as a cellar rat at Geyser Peak for six months, fueling what is destined to be a lifelong passion for winemaking, before returning to live and work in San Francisco.

“I tried to find a job but couldn’t,” he recalls. “I mean, I had a painting major. What are you supposed to do with that?” An exhibit of Burwell’s work opens Dec. 15 at the Palette Art Cafe in Healdsburg.

Offering to work for free, Burwell approached the renowned blacksmith and forger Angelo Garro, the man who took Michael Pollan boar hunting, who finds Alice Waters her urban fennel and who is a longtime friend of his parents. Garro took Burwell under his wing one day a week, which turned into a full-time apprenticeship after just a few months.

“I wanted to learn more about metal, and it seemed like it would be a good trade to have under my belt,” Burwell says.

And although he follows his mentor when working at the forge, when Burwell gets into his own studio, the rules go out the door. Another artist, he says, might sit down and design a piece, sketching an outline. Burwell likes to sit down with a pile of “whatever” and go from there.

A pile of whatever?

“Yeah, you know, like steel dust, and I did a lot of epoxy resin work this last year,” he explains. Discovering new ways of doing things is Burwell’s way. He describes his finished paintings as “happy accidents.”

Burwell’s large-scale paintings are abstracts reminiscent of landscapes both external and internal. He explains that he’s more involved in the surface and the textures of the materials themselves. And although Burwell says his paintings are more about the materials used than the representation, others beg to differ.

“When you squint your eyes, instead of a painting on the wall you see emotions, and human behavioral manifestations,” says Garro, Burwell’s mentor in metal and life.

These manifestations are sometimes calm, sometimes in conflict, and sometimes allegorical, evoking a sense of something that is better felt than explained.

“In Jeff’s sculpture, you see lines that cross, conflict each other even though it’s a human form,” Garro says. “People respond because they see themselves in it.”