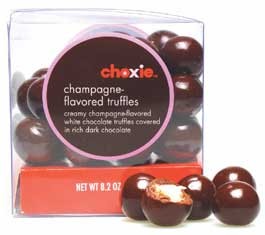 Beneath the shiny paper with its garish pattern, the innards of the thin square box, once shaken, suggested candy–some of those delightful Vermont maple sugar candies, I hoped.

Alas, I was wrong. After tearing apart the wrapping paper on a recent gift, I discovered garishly decorated cubes of chocolate resting beneath the clear plastic windows in a box that promised “artisan truffle squares.”

Truffles. My least favorite gift turned out to be chocolate truffles. “Artisan” ones, a term that evokes Old World methods and great levels of attention and labor. But something about the dull, waxy, dark-brown sheen of the chocolates didn’t seem right. “Inspired by art, exquisitely crafted of the finest ingredients from around the world,” the box declared. The brand was Choxie.

The Choxie box offered no visible expiration date–a bad sign. Unlike red wine and a number of cheeses, chocolate truffles do not improve with age; the flavor of the best ones will begin to fade within a few days, while unpleasant sour flavors develop after a month or so. I bit into one truffle cautiously, then spat it right back out–its pasty truffle filling showed a fluffy, white network of mold.

I gave a few more Choxies a chance, and they were thankfully mold-free. This, however, did not prevent them from tasting like crap. The confections did look kind of cool–technicolor-bright patterns of tinted cocoa butter on a transfer sheet can gussy up pretty much anything–but they had an extremely musty flavor (cheap chocolate) and only a faint aftertaste of the promised flavors of Key lime, chili limón and cinnamon praline. We threw the rest away, and we are not the kind of people who take chucking chocolate into the trash lightly.

Choxie truffles, it turns out, are made for and distributed by Target stores. I’m not above purchasing chocolate at Target–maybe a tasty Snickers bar or some Junior Mints–but when the heck did artisan truffles become a thing to pick up for a few bucks when you’re stocking up on fabric softener and AA batteries? Since when could artisan truffles be mass-produced?

Target introduced the Choxie line last October. A press release from Target said, “Target created Choxie to provide guests with a truly decadent tasting experience with a variety of chocolates that fit every taste sensation from rich, dark and milk chocolate to creamy peanut butter to delicate truffles.” I think what this really means is that Target wanted to make money by selling gussied-up cheap chocolate.

What we have here is a word war. Little more than a few decades ago, the word “artisan” mainly referred to a person trained in a mechanical art or trade–a skilled carpenter, for instance, or a silversmith. Today, within the context of food, artisan has its own connotations. The term began popping up more often in conjunction with foodstuffs in the late 1980s, when a scattered network of bakers across America began producing Old World, hearth-baked breads. Here we are today, in an age where there is probably a record number of Americans who know what a boule is, and the Bay Area plays host to a wealth of talented and influential artisan bakers.

There is no strict definition for artisan bread, but to many, the phrase conjures up rustic, crusty loaves offering a substantial, chewy interior. In her award-winning 2000 book Artisan Baking Across America, writer and baking teacher Maggie Glezer decided to wrangle a definition by asking various highly respected bakers for their own thoughts. “While I got a variety of answers,” she wrote, “they all agreed on the same thing: For bread to be considered ‘artisan,’ at least one part of its production must be performed by hand. . . . More difficult to define is the level of quality implied by the term.”

That lack of definition is, to some, a plus. Marketers’ use of the word has run amuck, and this is how we wind up with those scary Choxie truffles. Consumers already have to navigate through all kinds of grandiose claims on packages in grocery stores (“Now with zero trans fat!” “The goodness of whole grain!” “Contains lycopene!”); artisan is merely the newest addition to the stable.

“Gourmet” went down the slippery slope to meaninglessness long before “artisan” did. As an adjective, the word means “of or relating to fine foods”–a definition that’s flexible enough for food producers to stretch and pull to their heart’s content. On one end of the gourmet spectrum we have Michelin three-star restaurants; on the other, Wolfgang Puck’s line of canned soups. Wolfgang Puck may have carved his way into culinary history by becoming America’s first superstar chef, but can those soups really be as good as fresh soup from an excellent restaurant (or, for that matter, an excellent cookbook)?

Commercial-food adjectives are heavily loaded, suggesting ideals without offering concrete descriptions. The words “old-fashioned” and “homestyle” are popular on products in grocery stores, on frozen entrées in particular. “Real homemade taste!” is another common claim. This is all subjective, really; what if your mother was a horrible cook? What if the modern version of a dish is superior to the old-fashioned one? The mental image of a hearty, wholesome and traditional meal is what appeals to the senses, not the reality of a cardboard tray of microwaved lasagna.

A bag of Trader Joe’s pita chips that I recently munched touted that its contents were “baked in small batches.” Should that make a difference in the way pita chips taste? Think of all the bags of pita chips in all of the Trader Joe’s across America. How small can those batches be?

“Small batch” popped up again on a bag of coffee grounds that I received in the same box of gifts as the Choxie. “Roasted in small batches!” it boasted on its label. Once brewed, the coffee tasted remarkably like Maxwell House. Small-batch roasting is great, but it’s helpful if the beans being roasted are of good quality, and that the roasting in said small batch isn’t done to the extent that the beans become bitter and carbon-kissed.

Words change. Language is a living thing, it does not come down to us from lofty academia; it mutates and rises from the bottom up. The prepared-foods industry, for example, is single-handedly responsible for the decline of the word “healthful.” Living things–such as people, plants and pets–are healthy. Inanimate objects, such as fat-free fudge cookies, are healthful (if, indeed, they are good for you in the first place); e.g., Healthy Choice cookies can be part of your healthful diet. Grammar aside, it’s not surprising that “healthful” is all but extinct on food packaging. “Healthy” sounds like a more active word, and health and activity go hand in hand.

There is no body governing use of the terms “healthy” or “healthful,” but there are for “fair trade” and “organic”; in some cases, organic or fair trade certification can be the motivating factor for purchase. Yes, it is wonderful to think that our grocery money can support paying a fair wage to workers in developing countries or keeping our produce free of harsh pesticides. However, it does not mean that fair trade coffee or organic chocolate is of better quality across the board.

For instance, products that are grown in remote, developing areas in other countries–like the cacao beans used to make chocolate–may not be held to standards and regulations set by agencies in First World countries; a little extra cash in the hand of a third-party inspector can make the difference between being organic or not. This is not only unfair to the customer, but to the farmers and food producers who take pains to legitimately practice organic methods.

When it comes down to it, “USDA Certified Organic” and “Fair Trade” are brand names, just like “Certified Angus Beef.” These designations can be helpful to consumers, but they furnish only part of the story. Perhaps someday food products can be certified artisan or certified small-batch or, God forbid, certified gourmet. Will that change anything? Probably not. Hungry shoppers are best off approaching splashy claims on labels with skepticism and basing their purchases on research.

And when research fails, go with instinct. Like the instinct not to buy truffles at Target.