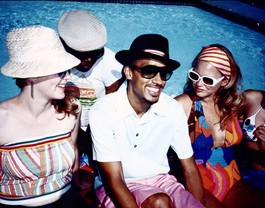 Somewhere in London, there’s an unfortunate kitchen. There, a yuppie couple picks and bickers at each other, destroying meals and burning hand towels amid the detritus of home cooking and a seemingly doomed marriage. It’s an ugly sight.

I’ve never been to England, and I don’t know Leanne White and Warren Murray. But through the magic of the Internet, Lennie and Waz (as they call each other) have broadcast their ineptitude and mutual disregard to the world through a series of video blogs called Crash Test Kitchen (www.crashtestkitchen.com). I feel as if I know them.

Someone so inclined could surely have a pop-psychological field day with Lennie and Waz and their deep-seated desire to share their cooking (and marital) travails with an online audience. But they’re not alone—and they have fans. There’s a virtual universe of wannabe Rachael Rays and Martha Stewarts (and Mario Batalis and Mark Bittmans) out there, all armed with a video camera, a stovetop and a certifiable over-share impulse. But who I am to criticize? I can’t get enough of these foodie vlogs, with their unsteady camera work, offbeat protagonists and eclectic recipes.

There’s Michelle in Australia, a charming, awkward hipster—with carefully mussed hair and a crafty apron—who produces Healthy Helpings TV (www.healthyhelpingstv.com) out of her enviable kitchen down under. Up to her eyes in gadgets (an electric pepper grinder, silicone cake molds, a hardcore hand-blender), she seems to exist in a magical playground of food, art and technology.

More important than her fancy pans and cute clothes is the fact that Michelle, a graphic designer by trade, seems to be a skilled, learned cook—at least as far as one can tell from half a world away. She makes things like quinoa paella (tongue in cheek, she calls quinoa “the new rice”), no-bake ricotta cheesecake (using filo dough) and grilled calamari salad, the sort of fast, healthy yet still-a-bit-glamorous dishes that one would expect from a super-cool Australian hipster-geek.

Some are not so much vlogs as fully formed, short cooking shows. Dinner with the Band (www.dinnerwiththeband.tv) is produced by Austin, Texas-based digital media company On Network and bills itself as “the perfect mash-up of indie music and edgy food for total entertainment.”

Even the old guard, the Connecticut-based road food connoisseurs Jane and Michael Stern (Gourmet Magazine columnists and authors of the classic Roadfood ) have made baby steps into food vlogging (www.seriouseats.com). Their web compendium, even without the video, is a must-read, probably one of the best food websites I’ve stumbled across.