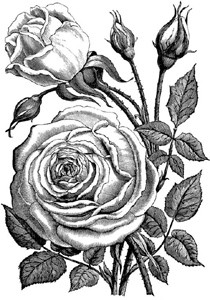 Scent-u-al: Before there was Viagra, there were flowers.

Love Is a Flower

When a rose is more than just a rose

With her dazzling talent for loaded brevity, Gertrude Stein once famously sighed, “A rose is a rose is a rose.” But Stein clearly had not boned up on her floral history. Had she done so, she might have noted that, in the entire kingdom of flora, roses are one of the most prevalent symbols of love throughout the ages. Rose extract has always ranked as one of the top ingredients in love potions, and Cleopatra reportedly seduced Mark Antony while wearing little more than its very concentrated essence. Many ancient cultures referred to a woman’s sexual parts as her “rose.” Believing it increased passion, Romans made love on beds covered with rose petals.

Poets, of course, are also big rose fans, from Shakespeare having his star-crossed lovers pronounce that a rose by any other name would smell as sweet, to Scotsman Robert Burns proclaiming that his love was like a red, red rose. And since rose petals are edible and rose water is a sweet flavoring, Gertrude could have cured her ennui by having Alice bake up a batch of rose-petal brownies before retiring to the boudoir.

Flowers are, by their very nature, sensual. While lauded for their unabashed beauty, their color, their fragrance, their fragility, their promise, their shape, the way they cry out to be sniffed and fussed with, it’s also impossible to ignore the flagrant display of their reproductive apparatus, as anyone who has purchased a lily and let it sit in the vase for a few days might know. That once closed and modest lily soon has a shiny dew oozing from pistons and six pollen-laden stamens dangling suggestively, crying out for a bee. With Valentine’s Day upon us, it’s heartening to remember that the courtship ritual of offering flowers is as old as romance itself.

As if simply receiving flowers isn’t enough of a turn-on, people have been known to ingest them, too. Aphrodite, the Greek goddess of love and beauty, is the namesake of the word “aphrodisiac,” and long before there was Viagra, there were flowers. Take the crocus, harbinger of spring: precocious, always the first to poke through the wintered earth, but also host flower of the precious spice saffron, used for everything from flavoring risotto to dyeing monks’ robes to warding off menstrual cramps to, yes, increasing potency in men, or so it is said.

And jasmine: mysterious, night-blooming, prized by the perfume industry and a key ingredient in Chanel No. 5, jasmine is believed to cause sexual allure. Peppermint is said to stir passions and induce suggestive dreams. A beverage made from coriander was traditionally given to newlyweds to incite lovemaking. The list goes on and on. Yet trust the Greeks to balance this hot house of lore with some floral chastity: female nymphs transformed themselves directly into flowers to escape sexual advances. Ah, who among us cannot recall a date where we have longed to be a daffodil?

The Victorians, when not covering their indecent piano legs with little frocks, were devotees of an entire, sophisticated language of flowers. Back then, flowers served as complex codes to speak what words could not. But imagine how many romances were shattered by careless mistakes.

Some messages were, of course, straightforward: a withered bouquet meant, not surprisingly, we are finished. A clutch of viscaria was simply an invitation to dance. But once one arrives at the carnations, things get trickier. A solid-colored carnation meant, in a word, “Yes!” whereas a striped one conveyed, “Sorry I can’t be with you, thank you for understanding.”

Not only did the type of flower offered have to be taken into careful consideration, but often, its hue was the clincher. Perhaps the tulip was the safest bet, as red professed undying love, variegated told the recipient that they had beautiful eyes, and yellow confessed desperate love.

Even when dismissing all romantic lore, flowers work their magic scientifically. Scientists have discovered that fresh roses are given their special scent by a substance called PEA (phenylethylamine, for you sticklers), which contains an amino acid that has been shown to slow the breakdown of everybody’s favorite hormone, the beta-endorphins. These are the ones that give us that giddy feeling that we are in love–or want chocolate. But better to leave some mystery in these ancient courtship rituals, to respect that elusive concept called romance. Octavio Paz summed it up best when he said, “Sex is the root, eroticism the stem, and love is the flower.”