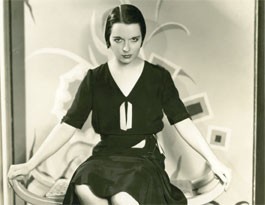 The 15-year-old San Francisco Silent Film Festival has no rival in North America as a showplace for film’s pre-sound era. The big event this year, not counting the arrival of silent film archivist Kevin Brownlow, is the latest edition of 1927’s Metropolis, finally to be screened at its original length thanks to some 20 minutes of 16mm footage discovered in a Buenos Aires archive.

Despite early works by John Ford (The Iron Horse) and William Wyler (The Shakedown) and rare films from China and Italy, it’s a French comedy that’s a standout among the unknowns.

The delightful L’Heureuse Mort (A Happy Death; 1924) concerns Théodore Larue (Nicolas Rimsky), who is first seen on a night of epic failure. We see his one rolling eye peering through a hole in the curtain as his farce The Friend of My Wife of My Friend dies horribly onstage during its opening night, with even the actors seemingly in revolt against the play.

Larue’s wife suggests a trip to the seashore to get away from it all, and during a boat cruise, the writer is swept overboard. This seemingly drowned failure is now acclaimed as a misunderstood genius whose works are suddenly a hot property. The plot line is as rich as Preston Sturges’ Hail the Conquering Hero. The fine rapport between the Larues shows that the tradition in French comedies of the affable yet businesslike marriage has long, deep roots.

By contrast, Louise Brooks is nobody’s idea of domestic bliss. Nineteen twenty-nine’s Diary of a Lost Girl is a frame for its star. Her face, which reflected light as few actors did, was a battlefield of purity and lewdness. Happily, lewdness wins the day, thanks to seven expurgated minutes recently restored to this melodrama directed by Germany’s G. W. Pabst, the master of the obvious.

Bearing the nutritious-sounding name “Thymian,” the divine Brooks is seduced, abandoned and ends up in a brothel, partially because of her habit of swooning. Terrific faces abound even if you don’t count Brooks: the enormous bald-headed swine of a security guard who rises up in front of a list of verbotens at the Home for the Bad Girls like a phallus-in-a-box; a wardress who bangs a gong and leers fit to burst as she watches the ladies do their calisthenics.

The macabre Häxan: Witchcraft Through the Ages (1922) is a film made in thrall to Intolerance, and it, too, is an epic. Director-actor Benjamin Christensen’s film was the most expensive ever made in Sweden up to that time, and yet it’s surprisingly flexible. A serio-comic semi-documentary that compares the witch hunts of yore to the treatment of psychiatric patients of the last century, it has patches of primal horror-movie stuff in it. Here, perhaps for the first time, is the horror film’s dual mission of pooh-poohing superstition while raising the audience’s hackles.

The part of Satan is gold for any actor, but Christensen does the old boy proud; he’s a virile, bare-chested devil with flickering tongue who drives monks, nuns and grandmas alike to hysteria. There’s a narrative story amid the documentary history: strangely authentic neo-realist passages about a witch hunt in Medieval times, a gynophobic action aimed at both beautiful girls and helpless old women. Made to avenge the victims of witch-terror, it has a sturdy purpose. And it’s suffused with hopes that modern psychology married with cinema would defeat religious mania. I guess we’ve seen how well that worked, but it was certainly a nice try.