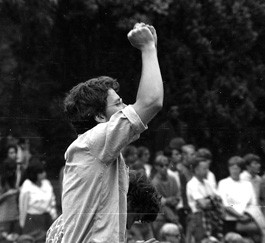 Film festivals are a bit like farmers markets. Though you are likely to see all kinds of fruits and vegetables for sale, a quick walk through the stands tells you what’s really in season at that moment. With large film showcases such as the Mill Valley Film Festival (running Thursday through Sunday, Oct. 7&–17), certain themes and subject matters always present themselves, with several films all examining different sides of the same question.

“We never impose themes on the festival,” says director of programming Zoe Elton, “but it’s interesting how sometimes those themes appear anyway. They sort of rise up out of the programs we’ve put together. It’s fascinating, because by noticing the themes that are there, we can see, in a way, what it is that filmmakers seem to be thinking about.”

In recent years, the MVFF has begun pointing out these little sub-themes, identifying them as “Focus” films. Among the various Focus themes for the 2010 festival is education, with at least five powerful documentaries dealing with the relationships between teachers and students.

Elton thinks that is quite telling and perfectly appropriate. “We work with a medium that is primarily seen as entertainment,” she says, “but we at the festival have come to see it as more that that. The work we show is always, in some way—either overtly or covertly—educational, in that it’s work that tells the truth, work that seeks to explain or instruct or show something new. That’s what a good film is: an opportunity to learn by experiencing the stories of others.”

The five documentaries comprised in “Focus: Mentors & Teachers” this year tell stories from across the globe, adding up to a kind of universal definition of a good teacher.

“In a way, [these films] collectively do offer a definition of a successful teacher or a successful ‘mentor,'” Elton says. “The good ones, the good teachers, are passionate and inspiring, whether it’s the monk taking a bunch of kids on a journey or the drama teachers in Trust or the coach trying to make a point about fascism. These people are driven by passion and the desire to communicate. If you can’t communicate your passion, then you can’t inspire others. That’s what makes a good teacher, and for that matter, it’s what makes a good film, too.”

Frederick Marx’s Journey from Zanskar (Wednesday, Oct. 13, and Saturday, Oct. 16) is a stunning documentary about a Tibetan monk who escorts 17 children on a perilous journey from their remote, largely illiterate village to the city of Manali, where they will learn to read and write, thus helping to preserve Buddhist culture. From the writer-producer who scored big with 1994’s Hoop Dreams, the story is propelled by the stunning commitment of the monk, who knows that he must do more than help them survive the harrowing journey; he must also convey the importance of someday returning home, to pass along what they’ve learned to others.

Most Valuable Players (Sunday, Oct. 10, and Friday, Oct. 15), directed by Matthew D. Kallis, is another documentary about students, but instead of fighting snow-blindness and altitude sickness, these kids struggle with hitting high notes and out-dancing one another. In this infectiously tune-filled film, a cash-strapped school district has left its performing arts programs to die, until a dedicated theater lover devises the “Freddy Awards,” a performing-arts competition that becomes a community phenomenon, as audiences flock to see which local singers and actors take the prize, American Idol&–style. Heart-pounding performances are melded with dramatic Rocky-esque backstories, as three high schoolers each discover different definitions of the word “winner.”

On a similar but strikingly different note, Trust: Second Acts in Young Lives (Saturday, Oct. 16, and Sunday, Oct. 17) examines the impact of theater on the lives of deeply troubled teenagers. Chicago’s Albany Park Theater Project is a nonprofit troupe that does more than recruit and empower young performers; the company tells those young people’s stories. With an emphasis on the lives of under-represented kids from Chicago, most from working-class and immigrant families, the troupe creates its plays from the stuff of real life. The film, by director Nancy Kelly, follows one particular student, an 18-year-old Honduran girl, as she watches her unimaginably difficult life become art in the hands of her fellow troupe members.

In To Educate a Girl (Monday, Oct. 11, and Saturday, Oct. 16), Fred Rendina and Oren Rudavsky follow two young women, Manisha and Mercy—the first from Nepal, the second from Uganda—as they struggle to gain an education. The film compellingly details the strength of will required, in some parts of the world, to achieve what the Western world often takes for granted.

One of the most anticipated events of the festival is the world premiere of Philip Neel’s riveting documentary Lesson Plan: The Story of the Third Wave (Sunday, Oct. 10, and Wednesday, Oct. 13). The film reexamines the well-known high school experiment, which really did take place in 1967 at Palo Alto’s Cubberley High School, when a teacher demonstrated how easily good people could be turned to fascism. Chronicled already in the bestselling novel The Wave, the story was something Neel has often wanted to tell, as he was one of the students who took part in the experiment 43 years ago.

“I’ve always believed that this was an incredibly compelling story,” Neel says, “and I’ve been talking about it my whole life. Since my reaction to the Third Wave experience was a very positive one, I wanted to make a film in which the actual participants could tell their own version of the story.”

The Third Wave experiment involved students forming a select society identified by a conspicuous salute, a controversial event smacking of the rise of the Third Reich. Ron Jones, the teacher who created the experiment, which eventually got him fired, is featured in the film as well.

“Ron Jones,” Neel says, “is probably the best teacher I’ve ever had. He was a riveting educator, and the lesson I learned, yes, might have gone a little too far by some people’s standards. But in the end, it was unforgettable, because he inoculated us all against fascism. He taught us a lesson we’ll never forget for the rest of our lives. And I hope through this film people will know what a great teacher he really was.”