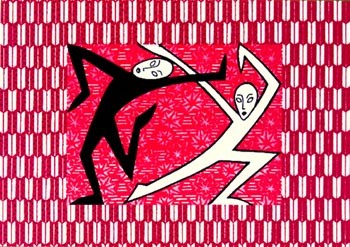 Movies in motion: Quirky art flicks like Karen Aqua’s “Nine Lives” (above) are standard fare at the Sonoma Museum of Visual Art’s Film Cafe, which begins its new season on July 22 with a workshop on making your own film.

MAKING a movie is easier than you think. Maybe you believe would-be filmmakers have only two options. You can head to Hollywood and try to sweet-talk some big studio into handing you a hundred million bucks to whip up a special-effects-laden extravaganza full of exploding cars and buxom babes. Or you can grab a digital camera and head into the dark forest of indie filmmaking, where you’ll wander for days without end, haunted by the grim knowledge that your blood, sweat, and copious tears will most likely come to nothing, since probably no one will ever see the finished product. If you even manage to finish it.

But get this: What if you could make a film without ever touching a camera?

It’s not a joke. It’s not a Zen riddle. It’s the subject of a workshop that opens this summer’s installment of the annual Film Cafe at the Sonoma Museum of Visual Art.

Now in its third summer, the annual series of outdoor screenings of short films in the courtyard of the Luther Burbank Center has acquired a reputation for offering offbeat visual experiences. (For a complete list of upcoming Film Cafe events, see sidebar, page 27.) But this year, for the first time, the event’s organizers are offering all of us voyeurs the chance to become full-blown participants.

The workshop, titled “Rolling with Sound: Making a Camera-less 16mm Film,” will not qualify you to direct the next Mission Impossible movie–or even the sequel to The Blair Witch Project. But participants will learn how they can make a visually interesting film without ever shouting “Action!” or “Clean that booze hound up and get him on the set!”

Best of all, the three-hour session–which will be led by SMOVA director Gay Shelton–will result in the creation of an actual film that will be shown to an actual audience. Whatever comes out of the workshop, no matter how quirky, will screen on Friday, July 28, at the first evening of the Film Cafe (which also features a selection of films from Monte Rio filmmaker Rock Ross).

“I would be so pleased if people got turned on about making films and saw how easy it was and actually created things that could be considered for next year’s Film Cafe,” Shelton says. “That would be really cool.”

Here’s how it works. Shelton will demonstrate various methods of using simple tools to create visual effects on both clear film stock and exposed color film. You’ll learn how to scratch through different layers of emulsion, how to draw on the film, stamp on it, drill through it (which shows up on the screen as dots), and much more.

“We’ll be doing all kinds of hand techniques, almost like making a collage or a drawing,” Shelton explains.

These techniques, by the way, are easy to duplicate at home. The tools used are simple: razor blades, sandpaper, marking pens, and so on.

“It’s all very ordinary stuff,” Shelton says. “The only thing you have to do is go out and find the film stock, and I’ll be giving sources for that.”

Shelton will be assisted in the workshop by poet Christina Svane and musician Billy O’Hare, who will collaborate with the student filmmakers to create a sound piece to go with the film.

“It’s a lot of work for five minutes,” Shelton admits, “but it gives people an idea of what’s involved.”

SHELTON has plenty of experience laboring in the vineyards of filmmaking. The 39-year-old graduate of UC Davis split her time in the art department between a variety of artistic media, with a special concentration on painting and drawing. But she spent many long nights in the school’s film and sound production studios.

Indeed, Shelton recalls one fateful night when she went on editing sound until well beyond her bedtime–with painful results at around 3 in the morning.

“As I was speaking into the microphone, I just suddenly nodded right off and hit my head on a drawer handle,” she recalls with a laugh. “So I think I can say I spent a lot of time in the production room.”

Shelton went on to participate in various film projects at the school, and even scored a grant to make a collaborative film, with a fellow student, called Page 50 of Roget’s Thesaurus. Along the way, she used many of the same techniques she’ll demonstrate in the upcoming workshop.

“I was pretty serious about making films at the time, and I used a lot of these techniques in my film, along with some really great found footage, including this great Catholic sex-ed film,” she says.

Shelton doesn’t make films these days (“I’m busy running this museum,” she says), but that may change. Long known for her work as a painter, Shelton has recently been forced by a lung problem to stop working with paint, so she’s thinking of returning to her old artistic outlet.

But the workshop is more than a reflection of Shelton’s personal interest in filmmaking. The board of directors recently revised SMOVA’s mission statement to add education to the long-standing goals of offering exhibits and events. To that end, the museum has begun to conduct things like school tours. The camera-less film session is an experiment, an attempt to understand the interests of the community.

“At this point we’re casting a big net and trying to understand what the most effective way to create these experiments in education would be,” Shelton says. “So people can vote for this kind of workshop by signing up.”