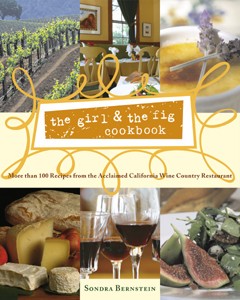 Fruit of the Gods: The mighty fig actually flowers within its skin.

The girl, the fig and the mushroom man

The girl calls him the “mushroom man.” That, or the “god of dirt and fungus” (affectionately, of course).

She never quite knows when he’ll show up. The mysterious master of mushrooms just arrives unannounced at the back door of her kitchen with a treasure of moist, earthy delights, the booty of a day’s woody wanderings. Culling her mental recipe file, she–Sondra Bernstein, the girl of the Girl and the Fig–creates a wild mushroom risotto or wood ear gravy for the evening’s menu. And we, the diners, are all the luckier for their meeting.

But that isn’t what this story is about, because much has been said (maybe too much) about the trendy local foods phenomenon. Restaurant menus all but list a street address for your beets. Trés chic.

Instead, this is about asking whether there is really a difference between farmed mushrooms from Watsonville and those foraged by the miraculous mushroom man.

The answer is a resounding yes, according to Bernstein. In her Girl and the Fig Cookbook (Simon and Schuster; $30), due out in April, she highlights not just the local foods that make up nearly all of her 100-plus recipes, but calls out by name many of the irreplaceable, irrepressible local personalities purveying her favorite ingredients, quirks and all.

In discussing her wild mushroom risotto, she says that Stephen Scallopino (aka the mushroom man) arrived on the back porch of her original Glen Ellen restaurant some four years ago “like a traveling mushroom salesman” selling chanterelles and wood ears out of his car. Not too surprisingly, Bernstein shooed him away, a bit leery.

“Who would have thought that buying mushrooms out of someone’s car was the way to taste the real flavor of the forest,” she wonders. Certainly not me. Frankly, it sounds like the start of a bad rave.

But Bernstein writes that the difference between the farmed and foraged mushrooms is immense. The farmed mushrooms tend to have a more delicate flavor compared to the “rich, earthy and robust” flavors of the foraged mushrooms. In discussing Scallopino’s prowess in uncovering strange and unique local fungi, she talks reverently about a man she has come to know and trust over the years and who has influenced her cooking and her recipes–and yet, a man who nonetheless sells foraged mushrooms out of his car.

But what Bernstein outlines is perhaps the evolution of local food buying. What could be defined as microregional cooking is a newish/ oldish idea of incorporating highly artisan foods produced in very small quantities, often changing daily or weekly, sometimes even grown for a specific restaurant.

Although it sounds like a chef’s nightmare, one San Francisco restaurant has contracted a local farm to grow a particular breed of peppers usually only found in Spain. Wanting to differentiate themselves from other restaurants using the same local produce outlets, more and more restaurants are looking for completely unique flavors and radically different regional and artisan foods, all produced–and here’s the key–with personal relationships to the growers.

A growing number of chefs are exerting control, or at least oversight, over not just the final product, but the entire process. By forming a relationship with the producers, they tap into the expertise of artisan growers and learn the ins and outs of their product.

For example, in Napa Bernstein had formed a close personal relationship with the growers of some 225 fig trees–a tiny farm in comparison with the thousands of acres of trees in some central valley growers’ fields. The couple, Mr. and Mrs. Fig, as she calls them, loved their fruit, cultivating a number of different species for their unique qualities. Bernstein came to respect their advice and their produce greatly, learning about the growing process and the unique flavors and idiosyncrasies of each variety, and would take deliveries (or pick up the figs) on a weekly basis. She became a part of the process.

“But like all good things, the sad truth is that figs don’t exactly fly off the shelves at Wal-Mart, and Mr. and Mrs. Fig couldn’t keep the farm up alone. They sold the property, and the figs were removed and replaced with, you guessed it, grapevines. “I have not seen such beautiful figs since,” mourns Bernstein.

But the girl hasn’t held it against the grapes. In fact, since opening her first restaurant in Glen Ellen, she’s been a huge fan of Rhone wines, introducing a generation of Chardonnay drinkers to the subtleties of Viognier. The drinkability of Rhone wines (Syrah, Roussanne, Marsanne) are a good match to the simplicity of the Girl and the Fig’s simple country foods (prepared with French passion, according to Bernstein). For each dish, the cookbook gives a wine pairing, most of which are Rhone varietals.

Simple, homey and conversational, Bernstein’s new cookbook is like her restaurants. There is a sense of place, a comfort with the unique people of the region and the amazingly diverse produce that makes Northern California such a food lover’s paradise–even if that produce does sometimes arrive in the back of the mushroom man’s car. The girl wouldn’t have it any other way.

Get Your Fig On

Although Bernstein’s cookbook comes out in mid-April, don’t start looking for local fresh figs until June or July. Local produce purveyors say, however, that figs from further south may start arriving as soon as May. In the meantime, dried figs from Turkey are about all you’ll find. They impart a sweeter, more jammy quality even when rehydrated. But when you need a fig, you need a fig.