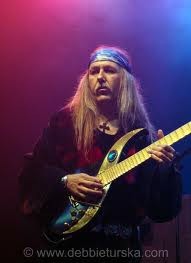 Guitar god Uli Jon Roth not only played with the Scorpions for five albums, but also gave birth to Sky guitars, a signature custom line made with additional frets in order to emulate the sounds of a violin. Infamously sporting Hendrix-like headbands, scarves and bandanas, the German guitarist is a true music innovator and professor, often called the “father of Neo-Classical guitar.” He performs a 40th anniversary Scorpions set on Sunday, Feb. 24, at the Last Day Saloon. 120 Fifth St., Santa Rosa. 8pm. $20-25. 707.545.5876.