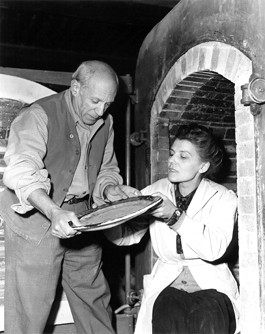 It’s a hot afternoon in Sonoma, and the Picassos are everywhere. They’re lying on the floor set atop moving blankets. They’re dotted with Post-It notes. They’re sitting unguarded by the usual clear plastic vitrines that museums use to protect them, just sitting, on white movable dais stands. More Picassos are as yet uncrated, piled in packing material in massive wooden crates marked “Fragile,” which still need to be pried open with a crowbar to reveal the treasures inside.

With Donna Summer and other sprightly dance music of the era playing over the system, Sonoma Valley Museum of Art executive director Lia Transue stands calmly amid the Picasso-driven chaos. Dressed down in jeans with her hair tied back, Transue gestures with a hand that is encased in a purple latex glove—a purple latex glove that casually holds yet another Picasso. “Let’s try that one there,” she suggests to her installation team, actually shaking the Picasso in emphasis.

No cause for alarm. All of this is fairly sturdy stuff. Rather than the paintings or drawings that the famed Spanish artist Pablo Picasso was best known for, the SVMA is on this day installing a show of some 65 ceramic pieces adorned and manipulated by the master of 20th-century art. Titled “25 Years of Edition Ceramics: Picasso,” this exhibition has been traveling to museums all across the United States for the last eight years straight. The SVMA exhibit marks the collection’s last stop. After this public viewing, the collection will be deaccessioned by the Edward Weston Collection, which owns it, and sold piecemeal into private hands.

Created like prints in limited editions, Picasso ceramics are not widely known in great part, Transue says, because he kept so many for himself. “He had about 3,000 pieces in his own home,” she says, “and he used them for everything.”

Judging by the pieces on exhibit, “everything” is a large word indeed. There are vases that could never hold a flower, olive oil jugs that could certainly emit but whose apertures are so slim as to never admit and water jugs suitable for only the most hydrated sipper. Function, however, is really beside the point. After all, this is Picasso. The decorations, the markings in the clay, the paintings over the surfaces and the mythologies evoked—childlike, primitive and, above all, rapid in execution—are what hold the eye and squeeze the stomach with pleasure.

Among his many talents, Picasso was known for being as adept at stage design as he was at inventing a whole new artistic genre. As skillful with paint as he was with chalk or metal. He was first introduced to clay as a medium in 1946 and quickly became interested in the painterly possibilities of adorning that which came from the very earth. While vacationing at a friend’s home in the south of France, the painter, then 65, decided to take in the local sights, which on that day included a potters exhibition in the sleepy town of Vallauris.

Vallauris had been known for the quality of its ceramics studios, but interest had died down over the last century. Upon encountering Suzanne and Georges Ramié, owners of the Madoura Pottery Workshop, Picasso became intrigued. He asked to see the workshop and immediately set to work, producing three pieces on the spot. He then asked for a permanent area of the workshop that he might use. He was Picasso. He got his permanent spot.

In 1947 alone, the master produced 2,000 pieces at Madoura. While there in 1953, he met Jacqueline Roque, who would become his last wife, and he continued to work in ceramics until his death in 1971.

Picasso never learned to successfully throw a pot on the wheel. Nor, according to exhibition curator Gerald Nordland, did he ever solve “the technical problems of glazes and multiple firings.” Instead, when given such standard outlay from the Madoura as long, oblong white serving pieces known as “Spanish platters,” Nordland says, “he treated them like canvases.”

Standing near a gloved assistant who is busy assessing the ceramics as they come out of the large wooden crates for scratches or marks, Transue admires a plate. “I wish that I had seen Picasso’s ceramics before I took pottery in art school,” she sighs, tracing a design with a gloved finger. “I’m a painter. I don’t really care how to throw a pot. I just want to paint on things, and that, of course, is exactly what he’s done. Look at the matte, the shine, the etched points, the relief—there’s a lot going on.”

With a busy pottery factory humming around him at Madoura, Picasso worked with master craftswoman Suzanne Ramié to better understand the medium. Soon, he was taking unfired ready-mades and manipulating them to reflect the vibrant Mediterranean mythology of lusty maids and horned beasts that often danced through his imagination. Take a vase, make a pinch, have a woman. Take a plate, turn it over, have a backside canvas. Take a water jug, seal it up, have a sculpture. The works collected in the traveling exhibition also reveal how Picasso gouged the giving clay with tools and fingers, marking it inextricably with his own personal stamp, and took strips and segments from other pieces and adhered them to unusual effect.

Having a stratospheric art star hunkered down in this sleepy south of France village once known for its ceramics revitalized Vallauris. Ever canny—apocryphal stories about the artist tell of him signing children’s skin rather than giving their parents a traditional autograph—Picasso worked with Ramié to create a series system in which his original creations could be exactly reproduced in limited editions no greater than 500. And so, Picasso not only revitalized the town, he’s kept it in business almost 40 years after his passing.

“Yes,” Transue affirms with a smile. “His ceramics are still being made.”