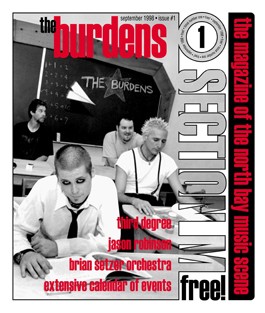 In September 1998, a new magazine appeared in coffee shops and record stores across Sonoma County. The free, tabloid-sized publication featured the punk band the Burdens on the cover and was printed with the cheapest, smeariest ink possible.

Abhorred, adored and largely ignored, Section M magazine soldiered on for five unsteady but always eventful years. And now, a decade after that first issue, former Section M staff members have organized a blowout 10-year anniversary party. Slated to perform are a laundry list of local bands, a number of which are likewise reuniting for the event. One question remains, though: Why? Why celebrate a magazine that never made a profit, was littered with typos, found a miniscule readership at best and, it could be argued, existed to serve itself?

The best person to ask is Michael Houghton, Section M‘s former editor-in-chief and, though he will vehemently deny it, the perennial Section M go-to guy. “You know, I just haven’t seen most of these folks in between five and 10 years,” he says, “and I just want to say thank you to everyone who ever volunteered, because Lord knows it was pretty thankless at the time.”

What was often “pretty thankless” began as a simple idea, fueled by a Judy Garland and Mickey Rooney&–ish “let’s put on a show” mentality: there’s a need and, gosh darn it, we’re going to fill that need. “What we saw was this disparity,” Houghton says, “a bunch of truly great bands, with a real Sonoma County sound emerging, and a lot of people who enjoyed seeing live music, but the two weren’t finding each other. We tried to be the hub of that wheel, to build all sides up and try to make a ‘community’ out of the chaos.”

What Section M lacked in finesse and professionalism it made up for in pluck—and, occasionally, arrogance; it was an entity that attracted people with a need to prove themselves. I know, because for about two years I was deeply involved with the magazine, eventually serving as its managing editor. It was a wonderful venue for hopeful writers, in part because it was a great place to make mistakes—and make them we did, slagging on bands just for the sake of sounding clever and boldly taking stories to print with a clueless disregard for fact-checking.

After a period, members of Section M‘s core staff began appearing as recurring characters in articles; readers were able to follow the exploits of not only local bands, but writer Felix Thursday and photographer Bill “Wild Bill” Powell, among others. Sometimes, tales of the staff’s activities were more interesting than those of actual bands.

But there was always a tireless dedication to the music, a delusional but sincere sense that the Bay Area’s creative expression was dependent on a fresh issue of Section M appearing almost magically every other month or so.

Section M‘s self-important tone occasionally ignited the cattiness that exists in any music scene. “I just remember bands, the local ones, having this sort of sense of entitlement,” says Felix Thursday. “Like, ‘When are you putting us on the cover?’—even though they hadn’t played a show yet. And people, mostly from bands, getting all pissed off whenever someone was honest about them, which was rare. Like we were having these big parties that no one else was invited to. Yeah, right. We were fucking working.”

Indeed, producing the paper was a Sisyphean effort entirely dependent on the efforts of volunteers. Houghton estimates that at least 220 people filtered in and out as Section M staff over the years, and that’s not counting people like Tom Gaffey of the Phoenix Theatre, Roger Tschann of Grizzly Studios or Scott Walker of the now-defunct Inn of the Beginning, folks whose involvement and dedication to enabling local musicians ensured there was music to talk about in the first place.

Cat Crawford both wrote and photographed for Section M in its later years. “The lack of money was a big problem,” she says. “It’s hard to get distributed when the delivery person isn’t getting some worthwhile scratch for his or her time. I was an assistant editor for a while and did my best, but I also had two jobs and was going to school, so I couldn’t always put in the long, unpaid hours often needed to get the issue together.”

Even so, there were times when the work paid off, Crawford recalls. “I got exposed to myriad new bands that broadened my musical palette, and when I showed up to a venue in [San Francisco], I got to say, ‘I’m on the list!’ Free passes, cool badges, front-row shooting, buttons, stickers, photos coming out my ears—it was nearly all good.”

“I’ve had a lot of people in the years since the magazine write me or come up to me and tell me that what we did really affected their lives,” Houghton says. “There were kids who started writing for us when they were 16 who went on to major in journalism, and the articles we published were part of what helped to get them into their colleges.” Section M is indirectly responsible for at least two happy marriages. (And, if you remember that year or so when yours truly was the staff writer of the Bohemian, you can blame that on Section M, too.)

A perpetual lack of funds expedited Section M‘s demise, but there was something else, too. Maybe everyone grew up a little too much. “We didn’t know what the hell we were doing,” Thursday says. “None of us were business people. [It was] ignorance and innocence, and all the typical reasons that things like this seldom stick around for long.”

But perhaps Bill Powell puts it best. “It was just really fun and entertaining, and when it stopped being so, I left,” he says. Section M‘s last issue, its 31st, featured writer Chuck Palahniuk on the cover. After five years of being financed through personal credit cards, it was time to pull the plug.

To those who are not currently donating their hallway to the storage of years-old back issues, Section M may be just a smear of a footnote in the North Bay underground, something that happened for a while and then went away. It proves that the crackpot ideas we pour so much heart and soul into often don’t come to fruition, no matter how much you believe in them. Maybe that Section M existed in the first place is impressive enough.