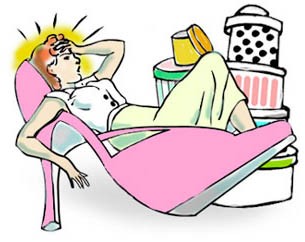 In the fashion feudal system, it helps to be completely monomaniacal

IT WAS the little dog that did it. The little dog and the little baby. The dog was a wild-eyed pug squirming in his oblivious owner’s lap at the show for the Fake London collection, terrified by the bright spotlights and pounding bass lines. The baby, so young his head still needed to be supported, was being oohed and ahhed over at a fashion party as if he were a Vuitton graffiti bag, earning his mother a comparable number of status accessory points. Who, I wondered, would bring these fragile creatures into a hot, crowded room unsuitable for nervous systems even more delicate than a designer’s?

My colleagues, as it turns out. But only a subset of the group, a subset beset with FOD (fashion-obsessive disorder) and hereupon referred to as FOEs (fashion-obsessed entities), a subset that migrates in clouds of parfum that you cannot buy, to places you may not visit, for events that are probably meaningless–to you.

Through my work I’ve met many like myself who toil in the fashion vineyards. They include journalists, publicists, stylists, makeup artists, buyers, and designers. Most are not unduly obsessed people for whom it is occasionally important to look fashionable.

They will often, however, settle for throwing on anything that is clean and not notably laugh-provoking.

TWICE A YEAR, we gather together for the frenzy of London Fashion Week, a chaotic period held last month during which London designers roll out their next season’s collections (similar weeks take place in New York, Paris, and Milan). There we are joined by a passel of FOEs, alien beings with preternatural standards of grooming who must never be seen without a minimum of three signifiers of up-to-the-minute fashion insiderdom. They serve to remind us that, in fashion terms at any rate, we disheveled peons are strictly low-count and no-rent.

These are not ladies of leisure, per se. Instead they are whirlwinds of sharp elbows and purposeful activity, filling sheets of heavy paper in chunky spiral-bound notebooks with sketches of the clothes annotated with brief descriptions (“lots of frills,” “batwing!”). Some take a post-literate approach, holding tiny titanium digital cameras high above their heads to shoot the models as they come down the catwalk. And the minute the show is over, their mobile phones are clamped to their heads to retrieve numerous urgent messages.

It has to be said that senior fashion editors of major newspapers and magazines, manifestly serious professionals, behave in much the same way, but somehow the FOEs give the impression that this runway work is perhaps a hobby, certainly nothing that would interfere with more interesting pursuits, like shopping. This has much to do with their enviable combination of ample time and ample money. Usually there’s an independent income that enables these lean, mean consumption machines to be in it for the fun, the glamour, and the sample sales. It is a closed world. A few of the FOEs surface in the gossip columns or open boutiques, but for the most part their names are unknown outside the magic circle, certainly to someone like me to whom they see no reason to introduce themselves.

The senior editors are often able to dress above their incomes–thanks to generous discounts offered by friendly designers–but they have a distressing tendency to let maintenance standards slip because of the necessity to meet deadlines. Plus, they often look–I can hardly bring myself to utter this calumny–tired. As for more junior staff, they find it impossible to live on what a low-level magazine job pays and buy shoes at prices equivalent to the deposit on a one-bedroom apartment. No one, with the exception of Carrie Bradshaw, a fictional construct, can support a serious shoe habit and an endless round of drinks, lunches, and dinners on a journalist’s income.

FOEs find it possible to have both the big-ticket items and the polish that can be achieved only by taking on beauty maintenance as a part-time job. Attaining the requisite standard of physical perfection means keeping up a punishing schedule of manicures, pedicures, highlighting, Pilates, waxing, facials, eyebrow threading, and more esoteric treatments that leave very little time for anything else.

In their few nonmaintenance hours, FOEs can frequently be found in the peripheral positions that dot the fashion industry landscape, where being well-connected and well-presented is enough (how, for example, does one train to be a “muse” like Jade Jagger, Loulou de la Falaise, or Chloë Sevigny?). Job titles can be misleading. There are some contributing editors or assistant stylists who are in it only for the prestige and coolness factor. Then there are others (disguised as FOEs) who are fiercely ambitious, for whom this is just the first step on the road to world domination. And although most senior jobs really require you to produce, some are filled by people whose relentless rise owes at least as much to connections as to talent, though their impregnable self-satisfaction indicates this possibility has never crossed their minds.

If only I didn’t have this dour concern with practicalities like affordability, suitability, and staying warm and dry, I too could wear stiletto-heeled mules and midriff-baring tops despite the freezing British rain. For an FOE, any practicality is purely incidental. In fact, the less practical your accessories, the greater their cachet. This is particularly true of shoes. Like the long fingernails of Chinese mandarins, they are effective as a signifier of status to the extent that they inhibit normal activity, suggesting you have armies of minions to carry out your every wish. The less your boots are made for walking, the greater the suggestion that your car and driver await.

It’s not enough to be In, you must be seen to be In. This is why one is well advised to squirrel away any party favors from the designer goody bag before the lights go down. At the Julien Macdonald show, I carelessly left the coveted souvenir T-shirt beneath the seat in front of me next to my purse. When the lights came up the purse was intact, but the T-shirt was gone.

MY SUSPICIONS fell upon a man and a woman who had at first perched on the seats next to mine (assigned to two women from Mademoiselle, according to the attached signs) and then moved forward a row. The goody bags had already disappeared from the Mademoiselle seats when they arrived, so these two, refugee riffraff from Standing, I am quite sure, pounced on my shirt as their best chance. For the single-minded FOE, you dress classy, you are classy–it doesn’t matter how you act.

Perhaps it is the private unpleasantness of such smash-and-grab values, but the FOEs’ gleaming surface conceals a chasm of insecurity. They sense that their positions are as precarious as the spindly chairs that line the runway. Hence the preoccupation with visible status symbols, the arbitrary and constant shifting of signifiers of inclusion, the excessive attention lavished on anyone deemed to be useful, and the ruthless dismissal of anyone deemed to be insignificant.

Do I subscribe to these shallow superficial values? Well, sure I do, at least to some extent. You don’t work in this world unless you’re prepared to judge people by appearance alone. If I didn’t subscribe to these values, it probably wouldn’t bother me that my heel shape is so over. I kid myself that my own choices are stylish rather than fashionable, that by buying things that aren’t in fashion I don’t risk going out of fashion and I don’t look like I’m trying too hard. Very pragmatic, no doubt, but not very effective when I’m given the once-over and quickly dismissed by the FOEs. I’m not a player, and they know it.

Would I like to be a player, to have the kind of time and money necessary to attain that level of fabulousness and fashionability? You bet, but a week around the FOEs is enough to remind me that the price of defining yourself by what you buy rather than who you are is too high.

Ellin Stein is a London journalist and the European correspondent of ‘InStyle.’ She has written for the ‘New York Times,’ ‘Village Voice,’ and ‘Women’s Wear Daily.’ This article appeared on salon.com.