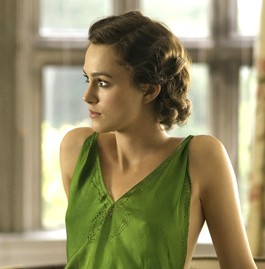 HIS winter carries the usual heavy cargo of oversize emotions, love that lasts through many lifetimes, noble wars, dead wives, dead husbands, dead children: the dark end of the year’s rich, fatty cinema. And yet the biggest surprise of the holiday movie season, which keeps on giving well into the new year, may turn out to be something relatively lean: a French cartoon. (Remember, opening dates are always subject to the whims of distributors.)

Persepolis (Jan. 11) represents a huge improvement on Marjane Satrapi’s popular graphic novel about growing up in Iran. The animation revives the power of UPA Studio’s work from the 1950s and demonstrates the graphic power of extreme blacks and whites, simple forms and two dimensions.

Satrapi’s work was a bestseller for many reasons. The bluntest one is that she makes the complex subject of Iran in the 20th century completely understandable to self-obssessed American young people. The princessy, very Westernized narrator learns that self-willed blindness isn’t enough to protect you, and ultimately, Satrapi’s book memorializes her grandmother.

But the holiday’s other high points offer a fiesta of toxic families. The best of them, Atonement (Dec. 7 in S.F., expands Dec. 14), is the exact opposite of Merchant-Ivory. This compelling, unusually flexible and intimate epic is drawn from a slightly intractable Ian McEwan novel. The spur of action is a little girl’s willful malice. Because of her storytelling, she forever blights the happiness of her elder sister, played by Keira Knightley at her most glamorous and attenuated best as an art-deco English lady. The film links two vastly different plots: a scandal at an English manor house in the 1930s, and the unpleasantness at Dunkirk, May 1940. Director Joe Wright’s show-stopping scenes of the Big War are extraordinary. They look like a combination of Alfonso Cuarón’s tracking shot in Children of Men, the art of Belgian symbolist James Ensor and a good dose of Bosch’s Garden of Earthly Delights.

Speaking of dangerous sisters, Margot at the Wedding (Dec. 7 locally) boasts two of them. In the new film by Noah (The Squid and the Whale) Baumbach, ulterior motives are in play as two very estranged sisters (Nicole Kidman and Jennifer Jason Leigh) reunite at Leigh’s nuptials to a bristly and porky oaf (Jack Black, as hilariously good as he was in High Fidelity). Talented newcomer Zane Pais plays the adolescent son Kidman smothers halfway to Oedipusland. This film will appeal to those who can stand unadulterated rancor.

The lean Australian Kidman also stars in the franchise-starter The Golden Compass (Dec. 7), based on Philip Pullman’s trilogy of novels about an alternative England shadowed by a vast and ruthless conspiracy: a church in the books, a “Magisterium” in the no doubt more God-fearing movie.

The Philip Seymour Hoffman/Laura Linney vehicle The Savages (Dec. 25) is sweeter than Margot, though good and mean and bleak. It chronicles the Sideways-style bitterness of the brother and sister, twin failures yoked into dealing with their ornery, senescent father (Philip Bosco). They stash him in a nursing home called Valley View, probably because there is no view and no valley. The soundtrack (in which Brecht and Weill’s “Solomon Song” figures prominently) is even better than Wes Anderson’s eclectic music programming for The Darjeeling Limited.

There Will Be Blood (Dec. 26 limited, expands Jan. 4) is Paul Thomas Anderson’s much anticipated drama of Cain and Abel&–worthy strife between brothers in the Texas oil fields, with Daniel Day-Lewis as a moral-free tycoon.

The Perfect Holiday (Dec. 12) has a little girl petitioning Santa for a husband for her momma. Lance Rivera (The Cookout) directs. The advance word on Juno (Dec. 21) is rapt. Stripper-turned-writer Diablo Cody came up with a pregnant teen trying to find the perfect family for her baby; Ellen Page (Hard Candy) plays the pregnant teen; Jason Reitman of Thank You for Smoking directs.

Something I can vouch for is the first-rate horror film The Orphanage (Dec. 28 limited, expands Jan. 4), an elegant Spanish screw-turner that proposes that her child’s death is only the beginning of a mom’s worries.

The Kite Runner (Dec. 14) has strife between two young Afghan men, one who has joined the Taliban. For further family feuding, admittedly among a family of rodents, we get the resurrection of Alvin and the Chipmunks (Dec. 14) in time for their annual source of royalties, “Christmas, Christmas.”

In National Treasure: The Book of Secrets (Dec. 21), Nicolas Cage seeks the missing 18 pages of John Wilkes Booth’s diary in order to clear the name of a relative who was supposedly in on the Lincoln assassination; trailers suggest a larger conspiracy, too huge for Lyndon LaRouche even. Charlie Wilson’s War (Dec. 25) stars Tom Hanks as the ex-Texas politician who helped bankroll the Afghan rebellion against the Soviet invaders. It’s heavy on the opera bouffe politics—the late Mollie Ivins, who knew Wilson, said the source material is like a cross between Tom Clancy and a Flashman adventure. Unfortunately, like the book, the movie looks negligent on the part of how Wilson and his other commie-busters gave the Taliban their start in life.

When you think of communists vs. Taliban, it’s a natural jump to Aliens vs. Predator—Requiem (Dec. 25), a gift for people who would rather avoid anything that smells like Christmas whatsoever. Similar bloody-mindedness occurs in two other films: Sweeney Todd: The Demon Barber of Fleet Street (Dec. 21), Tim Burton’s Victorian fantasia with Johnny Depp as the avenger/baker. Truly, it is the first cannibal-themed musical since, eh, Cannibal! The Musical. On a much gentler level The Water Horse: Legend of the Deep (Dec. 25) is Jay Russell’s CGI cartoon about a boy who befriends a Loch Ness Monster look-alike.

It’s a tragedy to be alone for the holidays, as Will Smith learns the hard way in I Am Legend (Dec. 14). Fortunately, this unhappy last man on earth has some surprise guests to cheer him up: an army of unstoppable vampires.

Rather be drained from the tear ducts instead of the neck? The rom-tradges P.S., I Love You (Dec. 21) and The Bucket List (Dec. 25 limited release) have a common source, one imagines: those self-help books that list the things to do before you perish. In the former, Hilary Swank is led around on a journey to Ireland by her demised Irish squeeze. Must be a Celtic cross between Ghost and Once. This plot was a tear-siphon back in the days of the TV movie Sunshine, where John Denver’s ballads got the audience in the proper mood for it; My Life Without Me did it again. A thick-enough soundtrack of Irish keening might liquefy the audience.

The latter, The Bucket List, is a geriatric bromance helmed by Rob Reiner: as men without much time left, ornery Jack Nicholson and angelic Morgan Freeman take care of that list of things they wanted to do before they kicked the bucket.

Dec. 21 (limited release) brings us The Diving Bell and the Butterfly, Julian Schnabel’s true story of a paralyzed man unable to communicate except with the blinking of one eye. The Great Debaters (Dec. 25) has Denzel Washington as a legendary debating coach who rallied a small Texas school to beat the best of the Ivy League. If you haven’t been softened enough, Grace Is Gone (Dec. 14) deals, in neorealist style, with the tragedy of the patriotic father of two children (John Cusack) whose wife perished fighting in Iraq. Buy a ticket, or the terrorists have already won.