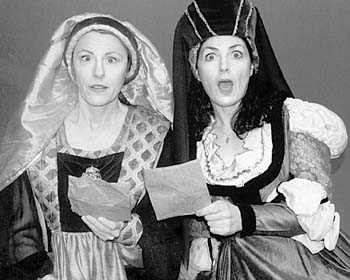 Upon discovering the bloated paramour’s shenanigans, the merry wives (aided and abetted, it seems, by the entire population of Windsor) conspire to deliver Falstaff to his much deserved comeuppance. Myriad traps are set and hilarious chaos ensues as contingencies and counterattacks abound on all sides, including those hailing from Alice’s misinformed and jealous husband, John Ford (William Neely), who misconstrues the besotted knight’s relationship with his wife.

BY THE SECOND act’s climax (which finds Falstaff stowed in a laundry basket while hiding from the rampaging Ford), one cannot help but think that Falstaff is the operatic antecedent to the screwball comedy. It’s that much fun.

Case, a gargantuan presence, is a pure delight as the would-be profligate John “Plump Jack” Falstaff. His basso profundo voice is so rich it’s a wonder he hasn’t been tapped to impersonate God. To coin a phrase, Case is well-sung.

He adheres to Verdi’s conception of Falstaff as more than the cartoonish lecher painted in the primary source material and endearingly portrays the character’s rough ride to humility.

Eileen Morris shines particularly as the conniving Alice Ford and delivers a spirited and adroit performance that showcases her abundant gifts as both an actress and an opera singer.

Constantly stealing the show is George Arana as the red-nosed rapscallion and Falstaff flunky Bardolf. Arana plays the sweet-hearted thief as a consummate drunken huckster and provides innumerable laughs. (It should be noted that Arana assumed the role and seamlessly integrated himself into the production only days before opening night to replace a performer whose memory had apparently been flagging.)

Choreographer Megan Watt’s wonderfully drawn third-act forest bacchanal is a visual delight that highlights the talents of a bevy of child performers (dressed as woodland demons and fairies, these tikes are excruciatingly adorable) and designer Maureen O’Sullivan’s imaginative costumes.

Throughout, music director Shuman conducts a crackerjack orchestra of 10 instrumentalists (dubbed the Garter Inn Band after Falstaff’s favorite haunt) who provide the rich musical landscape on which the singers frolic.

Though it may seem that the Cinnabar has cornered the market on opera north of the gate (one would be hard-pressed to find its equal in either quality or expertise ’round these parts), be assured that the company has never rested on its laurels or delivered inferior entertainment. Theatergoers, no matter what their predilections, will find the company’s Falstaff an entertaining and satisfying experience.