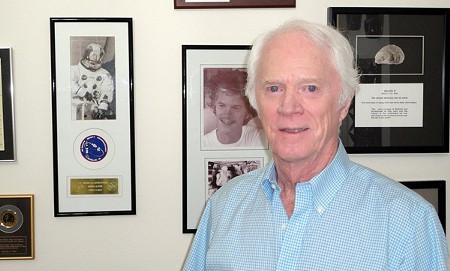 Our recent news story about Apollo 9 astronaut Russell “Rusty” Schweickart’s presentation at the Smith Rafael Film Center in San Rafael focused not only on the event, but on Schweickart’s work preventing asteroids from colliding with Earth. The nature of this work is worth taking a closer look, and here are some key points, illustrated by Schweickart himself as recorded during our interview.

Preventable Natural Disaster
The idea of an asteroid hitting the Earth isn’t just science fiction – it has actually happened several times. It’s what killed the dinosaurs, and even happened on a smaller scale just 100 years ago in Siberia. But unlike hurricanes, tornadoes and earthquakes, we can prevent this potentially massive natural disaster and save millions of lives.

But who should be in charge of this? It’s not a geology thing, it’s not a weather thing, it’s more like a space thing. There’s a branch of Government for that, right? The United States’ NASA is a leader in space technology. But there is nothing in its charter about public safety, and that’s what this project falls under.

Tunguska
The Tunguska Event, as it’s referred to, was an asteroid about 120 feet in diameter, by most estimates, that impacted Earth in 1908 in rural Siberia. It’s power was equal to about 185 Hiroshima bombs, and it exploded above the ground, sending a massive shock wave that stripped bark off trees and created an impact area of about 800 square miles.

This is NASA’s 100-year anniversary description of the event, which I think is pretty well-done from a historical and scientific standpoint. There are also many photos, which aid in grasping the immense power an impact like this could have if it had happened in a populated area.

Considering AG5, which pretty much has a 1-in-500 chance of hitting Earth, is larger than Tunguska, it’s a scary thought. But there is a way to prevent this from happening, and I think Apollo 9 astronaut Rusty Schweickart makes a good case for putting some resources toward deflection of collision-course asteroids.

‘This is Katrina’
Before Katrina, government officials had been telling everyone who would listen that the levees around New Orleans could not withstand a major hurricane. When Katrina hit, it became apparent that maybe someone should have listened to them. It would not have cost a ton of money to save the lives of thousands, let alone the property damage and national embarrassment of the response effort.

Schweickart feels this is a similar situation, but magnified hundreds of times. If a large asteroid hit the planet, millions could die, and there likely could not be a rebuilding effort.

Apophis
But just because science tells us the odds of an NEA hitting Earth right now doesn’t mean those odds will remain the same. As recently as 2009, The NEA known as Apophis made headlines when it was deemed to have greater than a 2 percent chance of impact, the highest ever reported. For something this large (900 feet in diameter), results would be catastrophic, especially if it hit in the ocean.

AG5, which is about half the size of Apophis, current has a 1-in-500 chance of hitting Earth, but that’s a 0.2 percent chance of impact. We will know more in 2029 when it comes closest to Earth. At that time, if it passes through a predetermined “keyhole” in space, it will almost certainly return 11 years later on course for impact. But by that time, it might be too late to plan, build and implement a deflection system by the impact date.

High-Priced Entertainment
The change in Apophis’s impact potential can be used to highlight the importance of more funding in this area. There are changes in the paths of NEAs all the time, including those not deemed threatening at this time. There are also plenty out there flying around the solar system undetected.

Schweickart makes the argument that space exploration is well and good, but it will not save lives. (Editorial comment: Unless Newt Gingrich becomes president, because he has pledged, in his second term, to establish a U.S. colony on the moon.) Schweickart says, “Science and exploration are high-priced entertainment.”