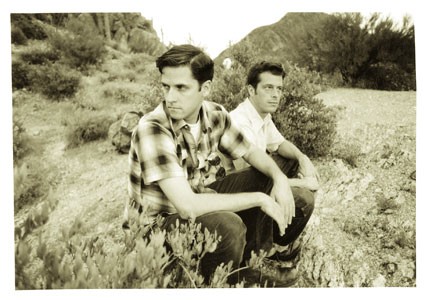 The Tucson-based band Calexico have put out consistently beautiful, challenging, and eclectic  recordings since the late nineties. We talked to founding member (along with drummer John Convertino)  Joey Burns, about the European Southwest, borders big and small, and how it felt to have his music played in outerspace.  Check out the full article in this week’s Bohemian.How did it feel to have your songs played in outer space?

Well, it was a big honor. We’ve got to know Gabby  (Gabrielle Giffords) and Mark over the years and for me, the whole personal connection  made it mean more on that level then as a news item or an achievement for the band. It felt more comforting to know that the music meant something to some very good friends of ours. As you can imagine it was a really emotional time and it’s the second time that Gabby has played a song for her husband Mark out there in space, of ours. The first time we chose “Crystal Frontiers,” which I thought was a good wake up call because it has horns blaring . They asked me to suggest one and  I said, ‘Okay, I’ll suggest one,” and so the second time I chose the song “Slowness” which is more of a ballad and a duet, and its about reaching out over that space, or out into that space, thinking of a loved one in the past, or just thinking of them in the now, so it was very sentimental and it was really honest.Calexico is so steeped in geography. The music really captures the eerie spacious magic of the desert.

Ther’s a lot of similarity between the desert that surrounds the Mediterranean, North Africa, and the Middle-East. Corsica. Southern Italy. Parts of Spain. The Iberian Peninsula. There’s something about that region I connect  with, and it must come from growing up in Southern California. If you travel down to Baja it feels a lot like if you’re traveling on a small road on the island of Corsica…which I’ve done and I’m always  surprised..”oh yeah, there’s cactus over here.” There is this connection. So I just want to put that out there. I admit there is a fair amount of cinematic quality that is evocative of the Southwest but it’s also the European Southwest too. We think of the desert as so Southwest.

A lot of the music that is inspiring to both John and I and the other members of the band comes from a lot of different places, whether it’s a jazz background, or  sensibilities that influence folk and pop and rock and roll, for years, but coming from this European standpoint, or from this Afro-European influence. Maybe a Cuban influence coming into New Orleans by way of Africa. We generally tend to take the road less traveled. If there are a lot of people doing any kind of particular musical styling, we’ll generally drop it because  there’s no real use in doing it because we’re more interested in finding new sounds and new expressions.

A lot of that comes from this connection to the past but not always the recent past, more like a hundred years ago, or 70 years ago. There’s an affection for, and maybe a pining for these days that are long-forgotten. But it’s also about looking at what the maestros were doing, or artists , writers, painters, poets, you know, what were they doing a hundred years ago, what were they into. It gives you the opportunity to go outside your immediate bubble. I can see where that mindset or aesthetic has influenced a lot of bands, whether its Fleet Foxes, Iron and Wine, mostly the folk bands I see, Beirut especially. Bands that go outside of the normal definition of what a contemporary indie rock or folk band can be. There’s a lot of world music influences too. There’s a lot of different languages coming in on some of our records. It’s all that kind of mixed up, melting pot, which you’ll find in the Mediterranean especially, because of all of the proximity to these different languages  and cultures surrounding this big body of water.

I liken our musical input and connection to that. In the Southwest, you have a little bit of that, more so than in Kansas or Seattle, because there’s more than one language being spoken. I like living on the border near the U.S. and Mexico because there is an element of hybrid cultures and it’s beautiful, I love it.How does being so close to  the U.S./ Mexico border influence your art and music?

Any kind of border region is fascinating. You’re surrounded by a predominant ly Hispanic and Latin community and I love it, and I still do. It’s brought me closer in to wanting to know more. I have this huge appreciation. When I travel, I’m always intrigued by those regions as well, whether it’s in Europe or South America or wherever. I love seeing how people adopt several different languages or cultures or traditions. And that’s what gives life to a lot of interesting art and expression. Music or literature or food, especially and wine. I’m a big fan of that. That’s something that runs at the core of a lot of this. This real honest appreciation for diversity. I feed off of it. I love it. I embrace it.

It doesn’t raise any kind of fear, like I see it doing to others around me. It’s really kind of unusual. And maybe it’s openness and perspective that I really appreciate when I talk with others who feel more of an openness to immigration policy or just embracing things that they don’t know. They don’t close up. They continue to open and want to learn more, and read more, and talk with people.  And that’s a positive thing. It’s something that our country has been founded on, so I find it really interesting that there is so much animosity  and fear and misinformation that’s spread through a lot of our own state, here in Arizona, our own state legislature and media. It’s really puzzling to  me. I’ve seen it escalate and become more  and more of a topic not only locally but nationally and internationally.  There’s something really interesting about the times, whether you’re in France or in Arizona. When economic times are difficult, immigration and immigrants  become a focus for blame and negativity and it’s not good or healthy.

So musically  there’s a lot of characters,  a lot of stories, and feeling are influenced by that. But it’s not 100% about that, you know it’s matters of the heart and day-today, boy-meets-girl stuff. But there is a depth to some of the music that we like and some of the music we write and record and perform and I think that’s what draws some of these audiences to this feeling, to this aesthetic that we’ve highlighted. Whether it’s audiences in Arizona, or Northern California, or Çhicago, or Mexico City, I think people have  come to realize this signature sound. And it’s not just having to do with the physical aspects of making the sound, it has to do with musicians and the purpose and what it all stands for.What are some upcoming Calexico projects?

We’ve just wrapped up a couple of soundtracks on films that are just coming out or about to come out. One is a soundtrack to a documentary called Circo. It premiered at the L.A. film festival. It’s the story of the Ponce family, three generations of circus performers traveling through rural Mexico—Sierra Madre. The other one is a feature film set in Ireland called The Guard.  It premiered at Sundance and is coming out later this month.

I worked with Amos Lee on an album recorded in Tucson. I played on the album and produced it. We’re also going to put out a collection of vinyl in November. We’re going to release all of these recordings on vinyl—an eight album set. Twelve pieces of vinyl. It’s more of showing our love for vinyl and for those audiences and people who love our music, this is kind of a special gift for them. There will be lots of extras in there too. Notes, pictures, and mementos.