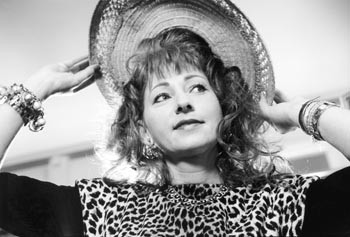 Hot stuff: Hot Couture manager Sheila Brownlee takes off her hat to the “Best Of.”

‘Best of’ everyday stuff–
finding the extraordinary in the ordinary

ULTIMATELY,” someone once said, “we are not defined by the stuff we accumulate during our lives, but by the stuff we did while we were still living.” Well, God knows, we’ve all got a lot of stuff to do every day, right? There’s the shopping to do, the car to wash, the kids to take somewhere, the local politician to distribute leaflets for–whatever stuff we do, we do a lot of it. Clearly, we’ll all be well accounted for when the grim reaper finally shows up to do his own stuff. Meanwhile, we the busy denizens of Sonoma County–so rich in its recreational and artistic opportunities–are blessed with an outrageously colorful and entertaining spate of stores, services, and suppliers to help us get all that stuff done. Where else can you get your haircut or pick up a bag of nails and get to stare in the eyes of a 10-foot grizzly at the same time? Why go to some boring mall-bound shoe shop when you can have your Hush Puppies resoled while engaging in razor-sharp repartee with one of the county’s greatest living street commentators? What better than shopping for a new skirt while bouncing and swaying to the hypnotic rhythms of piped-in music from Chile, Argentina, Brazil? Why have a quick 10-minute fling in the back seat of your car when you can have the same fling while getting your car’s oil changed, and have a nice fresh cup of coffee bought at a drive-thru coffee shack afterwards? Clearly, if you’ve got stuff to do, this is an entertaining corner of the world in which to get it done.

“It’s all done in the best possible taste,” insists Kristina Bonfield, owner and co-founder (with her husband) of Après Noir, a specialty line of sleek, sometimes lacy undergarments for men. The Santa Rosa-based company began 10 years ago offering more conventional shorts, swimsuits, etc., until customer requests suggested a new direction. “We were getting calls for something a bit more frilly,” Bonfield says. Now they ship their U.K.-made panties, bras, corsets, and other undies all over the world. Most customers “are heterosexual men in stable relationships,” she adds. “We get a lot of women ordering for their men.” Why not?–they know the, uh, intimate details necessary for a proper fit. The designers make some allowances, too, Bonfield notes. “We just put a bit of extra padding in the crotch to accommodate their paraphernalia.” Après Noir/Body Aware, P.O. 2329, Santa Rosa, CA 95405. For a copy of the men’s lingerie catalog, send a check or money order for $3. 538-1749 .
B.R.

Best Place for a Little Sole

Tuesdays at Tate’s Shoe Service in Santa Rosa features a bald old man white as snow, who smokes long, equally white, cigarettes, eyeballs the daily fish wrap, and offers a tersely honest comparison between yesteryear and today. Both the shoe shop and the old man at the front counter are a window to the past–to a time when unions routinely fought for their fair share, Americans fought fascism, and U.S. workers made their own shoes. Pick up your skillfully repaired footwear and learn about the tragic deaths of thousands of U.S. Marines in the strategically pointless September 1944 invasion of Peleliu in the Western Pacific. In the back, watch young Tim Alexander filling one of the last honest jobs in America as he stands at his cobbler’s bench among hundreds of wayward soles–brown, black, and white. Tate’s Shoe Service, 402 Mendocino Ave., Santa Rosa; 545-3859.
D.B.

You won’t hear their ads on the radio. No jingles, no corporate slogans. What you get at a well-run, independent auto-parts store is a familiar face, a considerate staff, and an honest discussion of mechanical issues. Everyone has their favorites, but mine are Dan’s Auto and Truck Parts in Petaluma and Jordan’s Imported Auto Parts in Santa Rosa. Both stores represent small business at its finest. If you so much as change your own oil, an independent store can make a difference–clean oil is the single most important part of a healthy car. At Dan’s, you can get Hastings premium oil filters, a product far superior to the wall of orange Fram filters at a chain store where you’d never guess there was an alternative. Dan’s Auto and Truck Parts, 345 Lakeville Hwy., Petaluma, 795-1707. Jordan’s Imported Parts, 1010 Santa Rosa Ave., Santa Rosa; 527-7070.
D.B.

Best Place to Get a Haircut

“Kids are scared of the bear sometimes, first time they see it,” says barber Paul Prince, commenting on the massive, attack-stance grizzly stuffed and standing in one corner of his small but colorfully atmospheric hair-cutting salon. “But they warm up to it before too long at all.” Known simply as “the bear,” its non-urban life ended in Alaska in 1969. The awesome creature has been charming and alarming men, women, and children since the straight-talking Prince opened the shop eight years ago. Located right off the street at the front end of the equally ambianced bar Gayle’s Central Club, the unapologetically old-fashioned barber shop–spinning barber pole and everything–has another distinction aside from the bear: Patrons can wait in the club if they like and Prince will ring a bell at the bar to announce that his chair is ready for a new customer. Rumors are many that you’d have to look far and wide to get a better haircut in the county, by the way, though many of Prince’s regulars also show up for the articulate verbal sparring the barber is known to excel in. “The only time my customers get mad at me,” he explains, “is when I spend time talking to reporters about the bear instead of cutting their hair–know what I mean?” Petaluma Barber Shop, 106 Petaluma Blvd. N., Petaluma; 762-9027.
D.T.

From the March 26-April 1, 1998 issue of the Sonoma County Independent.