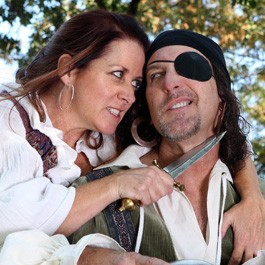 I have a soft spot for pirates. One sight of an eye-patch or a hook, a pegged leg or a skull and crossbones flying high, and I’m already 50 percent charmed. Because of this, I sat in my lawn chair with more than a little trepidation as the Sonoma County Repertory Theatre launched the final show of its 13th annual Sebastopol Shakespeare Festival with a new production of The Taming of the Shrew done buccaneer-style, with David R. Wright’s large outdoor set resembling a fantasy pirate ship. With such high standards, I was more than prepared to be disappointed—and then the pirates took the stage.

What can I say? They had me at “Arrrrrrrrr.”

Directed by Jennifer King, this is a Shrew set in a fantasy world not far removed from the Disneyland ride or the pratfall shenanigans of Gilbert and Sullivan. King has plunged Shakespeare’s battle of the sexes into this world, and it fits so well I’m surprised I’ve never seen it done this way before.

Petruchio (a swaggering Dodds Delzell, above, who should wear pirate garb more often) has come to Mantua looking for a wealthy wife, and quickly hears of the wealthy Baptista (William Wilson), who has two daughters: the beautiful and sought-after Bianca (Gwen Kingston, perfectly cast) and her older sister Kate (a magnificent Mary Gannon Graham, above), a short-tempered, swashbuckling, dagger-wielding pirate princess so hard to get along with that she’s been nicknamed “Kate the Cursed” by all the men in town.

With Baptista swearing that none of Bianca’s many suitors will win her hand until Kate has been married off first, the blustering Petruchio is persuaded to court Kate by the men of Mantua, a hilarious band of salty pirate characters played by the excellent Joe Winkler, Dan Saski, Benjamin Stowe and Miyaka Cochrane. The heart of the piece, as it should be, is the budding rock ’em, sock ’em relationship between Kate and Petruchio, and as directed by King, Graham and Delzell play the well-matched lovers with equal parts swoonish attraction and lusty, piratical-marital combat.

The inherent misogyny of the text somehow seems less potent when it’s happening in the world of pirates, and the obvious mutual affection of the couple, with Petruchio becoming increasingly tongue-tied as Kate figures out how to play the softer emotions of her dashing new husband, ultimately make it all work. At the end of the play, when Kate delivers her famous speech about women serving their husbands, it is obvious that, on this ship, it’s the shrew who has tamed the pirate. Arrrrrrrrrrr.