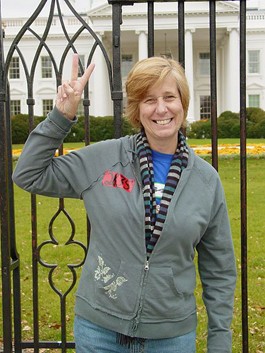 Activist Cindy Sheehan has her life goal firm and her answer, finally

Cindy Sheehan, a 2005 Nobel Peace Prize nominee and recipient of dozens of peace awards worldwide, will visit Occidental on July 31 to greet the public on the street and attend an informal reception at Howard’s Cafe, followed by an interview on Occidental’s radio station, KOWS 107.3-FM.

Sheehan is coming to Occidental, she said during a recent telephone interview, to raise money for community radio, of which she is a supporter, and also to collect book orders to help finance her Myth America Tour. In her latest book, Myth America: 10 Greatest Myths of the Robber Class and the Case for Revolution, she calls for people to peacefully cast off oppression and demand peace, justice and economic equality.

Sheehan, whose life as she knew it ended on April 4, 2004, upon the death of her 24-year-old son in Iraq, grabbed headlines in 2005 by helping found Gold Star Families for Peace, an anti-war organization providing support for families of soldiers killed in Iraq. Her encampment near George W. Bush’s ranch in Crawford, Texas, drew hundreds of people, including Congress members, activists and entertainment celebrities. There, Sheehan demanded an audience with Bush and an explanation of the reasons why her son and thousands of others were sent to Iraq to die.

Five years later, she confronts the question and sees the answer as unfortunately simple: “For empire and corporate profit.”

Sheehan admits that she is “very pessimistic” about the situations in Iraq and Afghanistan, “because the peace movement has stood down since the Obama administration. It’s not moral or ethical to stand down because there’s a Democrat in office.”

Sheehan has been arrested a dozen times at demonstrations. In 2007, she traveled to Cuba, calling for closure of U.S. military bases in Guantanamo. A year later she ran for the House of Representatives in San Francisco’s Eighth Congressional District, finishing second to Nancy Pelosi in a field of seven with 16 percent of the vote.

Not being a representative hasn’t put Sheehan off course. She has her life’s work. Of her dedication to activism, she now simply says, “This is my occupation, the thing I do.”