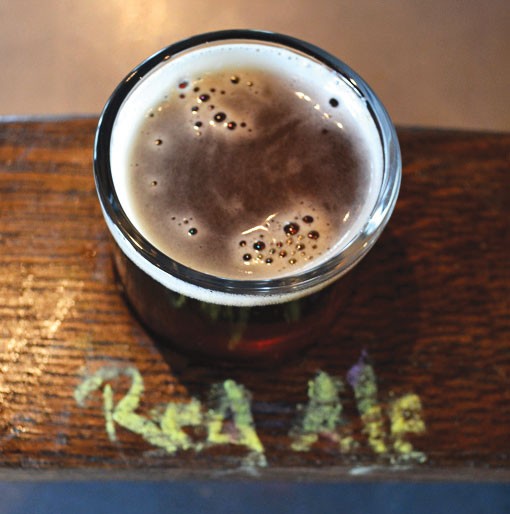 The hopyards meet the redwoods at Fogbelt Brewing

Such a difference between a taste and a tap. At most winetasting rooms, where alcoholic beverages made on the premises are for sale by the taste, by the glass or to go, serving food is mainly forbidden.

The taprooms of craft breweries, on the other hand, are permitted to dish out nachos and sandwiches, no problem—well, after the usual interminable permitting process, that is. So what’s the difference between the once-popular designation brewpub and the now-ascendant taproom? Seems to be just a matter of taste.

Six tastes of Fogbelt beer, served on a wine barrel stave tray, costs just $6. Owners Paul Hawley and Remy Martin, who grew up in and work in the wine industry, turned a decade-long homebrew hobby into an enterprise that includes growing their own hops (see “The Next Step,” Bohemian, Sept. 18, 2013). Taking over the space briefly occupied by the Wineyard winetasting room, Fogbelt opened in early 2014. The location will never be tops, but the outdoor seating is set back from the road enough, and the coherent interior, furnished with sofas, tables for two and a four-sided, brushed-metal bar, is plenty comfortable.

On a recent visit, the space was filled with the aroma of smoked kielbasa ($6) from Sonoma County Meat Company; other nosh includes nachos ($6), a Mediterranean plate ($5), and nice looking salads ($6–$7) and sandwiches ($7-$8) that round out the menu. Growlers are available to go; local ciders and wine by the glass.

The Armstrong stout, named after local giant the Colonel Armstrong tree, is light-bodied and malty. (Fogbelt beers are named for large and notable redwood trees in the North Coast.) Lost Monarch is a snappy and refreshing take on the Belgian witbier style; the cilantro and Kaffir lime added to spice it up are barely on the horizon of my taste perception. More citrusy still is the Atlas blonde ale. The Del Norte IPA shows off its hops in a sweetly fruity style, with caramel softening the latent sensation of astringency. With nearly as many IBUs (international bittering units, listed on the chalkboard menu, as nearly all breweries are compelled to do these days) as the IPA, Hyperion red ale has the blunt bitterness of an ESB, but a rich, malty and long palate. It’s named for the world’s tallest known tree, and here’s my bet that it becomes Fogbelt’s best-known beer on tap around the Redwood Empire.