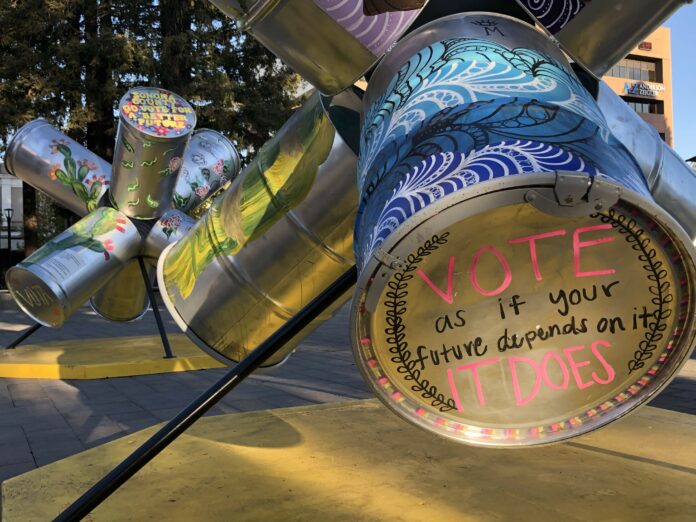 Welcome to the Bohemian’s live coverage of the Nov. 3, 2020 elections. Scroll from the bottom up to read in chronological order.

Three countywide measures appear poised to pass with a strong margin as election results begin to trickle out in Sonoma County. As of 9:00pm, 61.98 percent of Sonoma County’s precincts were reporting.

Measure DD, a proposal to extend a sales tax supporting transportation funding in the county, is ahead with 72.34 percent of the vote. The sales tax needs two-thirds approval to pass.

Measure O, which would raise $250 million for mental health and addiction services over the next ten years, was ahead with 69.3 percent of the vote as of 9:00pm. The sales tax needs two-thirds approval to pass.

Measure P, which would strengthen oversight of the Sonoma County Sheriff’s Office, was ahead with 67.10 percent of the vote. The measure needs a simple majority to pass.

Read our previous coverage of the ballot measures here.

7:48pm: A proposition to consider

While the country tries to glean what they can about who will be America’s President for the next four years, Californians also have a whole slew of critically important state propositions to keep tabs on.

Each will change the lives for some part of the population in big ways in the coming years. The Bohemian will watch closely to see how they fare into the night. Here are the ones we’ll be monitoring most:

Prop. 15: Prop. 15 would mandate commercial properties—but not homes—be assessed every three years and taxed at their current fair market value. Proponents say the measure would generate between $6.5 trillion and 11.5 trillion for local governments and schools. Opponents say the tax increases will trickle down to small businesses and customers. The Santa Clara County assessor is taking a more nihilistic approach: he says none of it matters because it can’t be implemented. Time will tell.

Prop. 16: Prop. 16 would reinstate affirmative action 24 years after it was banned, meaning universities and public entities could factor someone’s gender, race or ethnicity into admissions or hiring decisions. Supporters say that it would level the playing field for people of color. Opponents fear it would legalize discrimination.

Prop. 17: Prop. 17 would restore voting rights for parolees with felony convictions, allowing them to vote after they’ve served their prison sentence, but before they are done with parole.

Prop. 18: Should 17-year-olds who will be 18 by the time of the next general election be able to vote in primary and special elections? The youth’s voting fate is in Californians’ hands.

Prop. 19: Prop. 19 would let homeowners who are 55 or older, disabled or wildfire and disaster victims to transfer their primary home’s tax base up to three times—up from the one-time move allowed today. The lower tax base could also still be passed to children, but only if those young adults plan to live in the home, or if the property is a farm.

Prop. 20: Prison reforms have been on the California ballot for years, often finding ways to help with the overcrowding in facilities across the state. Prop. 20, may do the opposite by allowing some property crimes of more than $250, such as “serial shoplifting” and car theft, to be charged as felonies instead of misdemeanors.

Prop. 21: Prop. 21 would allow cities and counties to pass rent control for more properties than currently allowed, including those built before 2005 and owned by landlords with more than two properties. Single-family homes would be exempt.

Prop. 22: When tech companies spend a couple hundred million dollars supporting an initiative, it’s pretty clear who stands to gain from its passage. In Prop. 22, Uber, Lyft and other gig companies want the state to exempt them from treating their workers as employees instead of independent contractors, which would save them gobs of money.

Prop. 25: If Prop. 25 passes, it would uphold a 2018 California law that would end cash bail and instead use a risk-based algorithm to decide who gets out of jail while awaiting trial.

Read more about all of the propositions on the California ballot in our earlier coverage and check back here to see how these ballot measures fare.

As election results begin to roll in from eastern states, Sonoma County’s polling places will remain for another 30 minutes.

Similar to other counties, many Sonoma County voters cast their ballots long before Election Day.

The Sonoma County had processed more than 203,000 ballots by Monday, Nov. 2, which accounts for 67 percent of its registered voters, the Bohemian reported this afternoon.

Sonoma County election results for national, state and local races will be posted on the Registrar of Voter’s website as they become available.