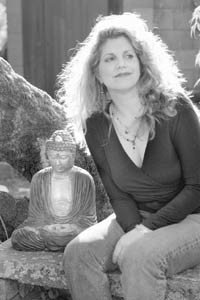 SOMETIMES all we hear about the music business are horror stories–greedy managers, inept labels, contracts that screw the artist, acts that die owing to artistic differences. So it’s refreshing to hear the success stories, the ones in which talent and business work in harmony to bring forth the music’s best qualities.

“I’ve been blessed to work with people with a lot of integrity,” Lucia says of the team that’s behind her outstanding debut, a polished and elegant set of standards called Sings Jazz and Other Things (on Raw Records, a Port Townsend, Wash.-based jazz label run by former Doobie Brothers sax player Danny Hull). “It’s hard to find people at this level who are kind and completely supportive.”

Lucia has had her brushes with musician’s horror. A native of upstate New York, she studied opera at Binghamton University, only to lose her scholarship to Eastman School of Music during President Reagan’s abrupt cultural grant slashings of the early ’80s. She struggled as a single mother and was finally signed in 1998 to a deal with a small Philadelphia label, but was stifled there by a controlling, rigidly incompatible producer. That project was never released; it took the help of music lawyer Tod Ratfield (Lucia had sung at his wedding; he’s now her manager) to get her out of a suffocating contract.

A turnaround had already begun when she moved to Petaluma in 1982. “I sold my flute for a one-way ticket to the Bay Area,” she notes of her last-ditch resignation. Unflappable, Lucia returned to live music within a month, playing everything from jazz to punk. While singing backup on a country disc by local artists in Fremont, she met sound engineer (and future husband) Jamie Bridges, a veteran who had worked with big names like Van Morrison, Al Stewart, and Tremaine Hawkins.

Bridges knew the sound that was right for Lucia, a fact evidenced by the warm balance and pure clarity of Sings Jazz and Other Things. “He’s the technician, I’m the ears,” she says of their artistic symbiosis. Several cuts on her debut were recorded at their own Room with a View Studio in Petaluma, with the remainder laid down at Mesa Recording in Guerneville.

SYMBIOSIS applies to Lucia’s backing band as well. Too often in jazz history, female singers have just been a voice fronting a backing band, but Lucia writes the charts for her trio, commenting that, creatively, “I’m one of the guys. We perform as a quartet.” In live performance, this creative sympathy makes every rendition different. “We’re almost writing from scratch every time we play.”

Alford in particular is a standout, with a chiming, cascading, waterfall-like solo on the opener, “Detour Ahead,” and lighthearted, peppy comping on “It Might as Well Be Spring.” Lucia says that she and Alford “complete each other’s musical thoughts,” almost dancing around each other’s ideas.

Lucia’s debut also shines with alto sax cameos by legend jazz saxophonist Bud Shank, who, like Lucia, is a recent signee to Raw Records. It’s another testament to the support she’s receiving that the label approached Shank about guesting with Lucia, a suggestion Shank eagerly embraced. Though his parts were recorded in Washington, he sounds, as does the whole disc, as if he’s intimately playing in your very own living room.

Teamwork notwithstanding, it’s Lucia’s voice that anchors the disc–delicate yet steady, graceful yet almost girlish, an understated yet solidly attractive beacon that keeps the disc on track. On the set’s one nonjazz cover, Joni Mitchell’s “All I Want,” Lucia’s tone is calmer, surer, and more centered than Mitchell’s whimsied edginess. The treatment is more than a nod to Mitchell’s current vogue among pop artists; Lucia uses it to focus a set that, through careful and deliberate sequencing, amounts to her own look at travels through roadblocks in love and life.

“[‘All I Want’] represents the side of me that’s a writer,” Lucia says, noting that some of the more than 50 pop/jazz/folk songs she’s written will surface on her next effort. “The order of the songs was so important. . . . ‘Detour Ahead’ is a metaphor for past years of my life that were very difficult.”

The worst of those years seems to be in the past. Fortune is smiling now in the form of recognition. For her CD release party in March, Lucia sold out a show at Yoshi’s in Oakland on a Wednesday night. Respected jazz scholar Herb Wong wrote the liner notes to Sings Jazz and Other Things, and she’s just signed Neal Sapper, five-time Gavin Report “Jazz Promoter of the Year,” to work the disc at jazz radio. Already on the playlists of over 150 college, public, and regional jazz stations (including KJZY and KCRB in Sonoma County and KCSM in San Mateo), she gleams that “if Neal is promoting your record, you will be played on jazz radio.”

But the success story isn’t going to her head. She’s genuinely happy to see her music working. Luckily, Lucia can finally say, “I feel like I’m being taken care of.”