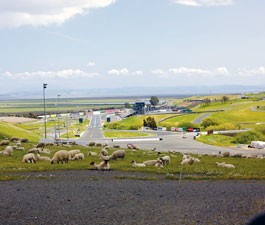 But behind the scenes of this marketing juggernaut and show-business giant is an eco-friendly climate and a commitment to global responsibility. In fact, NASCAR has gone green.

The past decade has seen the National Association for Stock Car Auto Racing (NASCAR) move from the confines of the Deep South to the center of the international stage. NASCAR has attracted a fan base 100 million strong that is extremely loyal to drivers and their sponsors alike. This base gives NASCAR the power to make a difference for the better.

Sonoma’s Infineon Raceway is surprisingly among the greenest businesses in the North Bay. Infineon’s president and general manager Steve Page says that he goes the extra mile to deliver a green message to every race fan who attends the track over the year.

“We have implemented a sustainability program that has a couple of primary facets,” Page reports. “First off, it’s how we operate as a business in every thing we do. We are extremely proud of what we are doing now, and we continue to improve upon it. This summer, we are planning to make a major announcement on a significant solar initiative. We are very serious about solar energy.”

And Page is only getting started.

“We are uniquely positioned to market from a green perspective,” he says, “from electric dragsters winning races here to Infineon hosting the first ever zero-carbon motorcycle race. In fact, I think we have the perfect venue for a performance-oriented green car show for consumers. We can promote them from a performance standpoint. One thing I want to make clear is that this is a very serious commitment on our part.”

Dr. Mike Lynch is the managing director of NASCAR’s Green Innovation program. Hired in 2008, he has reduced the environmental footprint of each NASCAR event, working in a number of areas to keep NASCAR moving in a green direction.

“The tracks have very effective recycling programs,” Lynch explains. “For example, the Daytona International Speedway recycled nearly 12,000 total pounds of aluminum and plastic during Speedweeks. At the track, Coca-Cola has done a great job educating fans on the benefits of recycling and encouraging them to drop containers in designated bins at the facilities.”

But Daytona isn’t the only one. Tracks across the country are making great strides in lessening their environmental footprint. Michigan International Speedway purchased a tree farm and planted trees around its wetland boundaries to identify and better protect these areas on its 1,400-acre property. Protected wetlands now total nearly 200 acres in and around the facility.

The Auto Club Speedway in Southern California hosts several recycling events annually, such as the annual mower-recycling day when people return their gas-powered mowers. The track is also used as a base for residents to trade in older toilets for new, low-flow environmentally friendly ones and to drop off for proper disposal old televisions and computer monitors. And among its other efforts, our own Infineon Raceway in Sonoma is using waterless toilets, which is considered to be very innovative.

NASCAR partners such as Goodyear, Safety-Kleen and Waste Management, leaders in their respective industries and environmental ambassadors in their own right, are setting benchmarks for dedication to keeping NASCAR green. Goodyear, the official tire of NASCAR, recycles just about all the tires used on NASCAR stock cars. Tires are transported to Charlotte, N.C., and immediately shredded on site, thus eliminating risk of fires and mosquito breeding. The recycled material is sold to various industries, including power-generating plants and cement kilns. It’s also used as composite material for playgrounds and for asphalt mixtures.

Waste Management is a name familiar to many fans from its green paint schemes on racecars over the years. Waste Management is the nation’s largest recycler, and one of the NASCAR industry’s key partners in protecting the environment. The company provides exclusive waste and recycling services to all tracks holding NASCAR Sprint Cup Series and NASCAR Nationwide Series races.

While the racecars themselves may not be the greenest things on the planet, the message that they carry to the fans is getting greener. “We are taking a leadership position in promoting car-care conservation and fuel-saving messages,” Lynch says. “NASCAR’s fan base consists of tens of millions of car enthusiasts, and this initiative is having a meaningful impact.”

One development is a new alliance between NASCAR and the EPA to promote SmartWay vehicles at NASCAR events from all of the sport’s vehicle manufacturer partners. SmartWay is an EPA-branded designation for fuel-efficient cars. NASCAR has SmartWay displays at several tracks this year, showing tens of thousands of fans the highly efficient, high-quality, attractive vehicles from their manufacturer partners.

NASCAR also partners with the Automotive Aftermarket Industry Association in the “Be Car Care Aware” program, which encourages motorists to take care of their vehicles, reduce emissions, improve gas mileage and increase safety. Since 2004, NASCAR has committed more than $50 million in advertising and promoting “Be Car Care Aware.”

“There’s a lot of meaningful activity in the green space,” Lynch says. “And we’re just getting started.”

And the drivers are doing their part, too. NASCAR superstars Jeff Gordon and Jimmie Johnson both drive hybrid cars away from the track. Brian Vickers drives a Lexus GS Hybrid, and even buys carbon credits to offset the environmental impact of his home.

It’s difficult not to point out the 400-pound gorilla sitting in the corner: fuel. Currently, NASCAR is not using alternative fuel, but that day will probably come soon. “It is one of the long-term initiatives that is very important to us,” says Lynch. “We’ll be working with Sunoco to step up our efforts, making sure we’re doing everything we can to look at alternative-fuel options. That solution may be well down the road, but it’s very important.”

Why it isn’t that the number one priority, especially with the current crisis?

“That’s a good question,” Lynch says. “There are two important parts to the answer. First, the world’s scientists have not yet identified a viable alternative solution, and there are a number of untested options out there that might be viable. The second part of the answer is that fuel is just one piece of a very large and complex puzzle in our industry.

The fuel used in NASCAR competition is relatively insignificant. Dr. Diandra Leslie-Pelecky, a physicist at the University of Texas at Dallas, recently calculated that the amount of gasoline consumed over the entire average NASCAR Sprint Cup Series weekend is equivalent to the amount of fuel that the United States overall uses in two seconds.

“Fuel is certainly an important symbol,” Lynch agrees, “but we can have a much greater impact on protecting the environment by initiating a comprehensive industry-wide strategy in how we operate overall.”

So why aren’t hybrid racecars whooshing around America’s raceways? One issue for hybrids is that batteries are heavy and racecars need to be light. So the answer may be that hybrid technology is fairly new to racing.

Incredible as it may seem, the first hybrid car produced was a Porsche. Company founder Dr. Ferdinand Porsche displayed his Porsche Electric Carriage Car at the World Fair in Paris in 1900. Over a century later, Porsche is back in the laboratory.

Today, Porsche is leading the march toward the hybrid racecar, having just unveiled its GT3R hybrid a few months back. Instead of batteries, it employs an electro magnetic flywheel system that is charged by kinetic energy generated by braking. This car looks just like the Porsches that race at Infineon or Le Mans, but it is aided by 60 kW of extra power to each axle. This power surge lasts for about eight seconds, and has impressed some of the world’s greatest sports car racing drivers. In only its second outing, the new GT3R finished third. Porsche plans to enter hybrid racecars in the 24 Hours of Le Mans race in 2012.

Though Porsche does not have a presence in NASCAR, this technology comes as encouraging news to the entire racing community.

What few argue is that NASCAR has a good model. Its presence boosts local economies, employing thousands and attracting an international audience; above all, for fans, it puts on an excellent show. What may look like cars going around and around is certainly a lot more than that. It is, after all, the single most popular sport in America.

NASCAR returns to Infineon Raceway for the Toyota/Save Mart 350 on June 18–20. This race represents the largest sporting event in Northern California, and Steve Page and Infineon Raceway are prepared to deliver a green message to over 100,000 race fans.

“We are presenting a day of entertainment in a beautiful setting that extends beyond the three hours of racing on the track,” says Page. “We have an air show, a Ferris wheel and lots of activities other than racing. You can find classic track food, as well as gourmet snacks, such as local oysters. Our immense property is open to hikers, and we have interesting venues set up around each of the corners. I’d like to think that people could come here and take in the whole venue, not just the race.”

Three R’s Since 2004, the track has recycled more than 73 tons of materials, being recognized by the California Department of Conservation, Division of Recycling for its efforts. Infineon also works with Safety-Kleen at its NASCAR and NHRA events to recycle used oil products.

Living Mowers Infineon is home to 3,000 sheep that help to maintain the grasses and fire lanes around the facility. The raceway formed a relationship with Rocky Mountain Wooly Weeders in 2008, which provides the sheep.

Pee Free Infineon uses waterless urinals in restrooms that reduce water consumption by 36 percent. Additionally, the raceway is home to an independent water system and sewage-treatment plant. It is not dependent on the county or city for its water needs. With this system, all landscaping is maintained with recycled and reclaimed water.

Not Tired The raceway sends old tires to be recycled so that they can be used to help create rubber-based asphalt, playground padding and other purposes.

All-Nighters Following the lead of area vineyards, Infineon installed 15 owl boxes around its property to encourage the birds to nest and hunt for gophers and other rodents. One family of barn owls can eat 30 to 40 rodents a night, eliminating the need for pesticides and other poisons in controlling pests.

Growth Opps As part of NASCAR’s Green Clean Air program, Infineon plants one tree for every green flag that flies during the NASCAR race. In 2009, Petaluma Junior High School received 30 trees from NASCAR and Infineon.