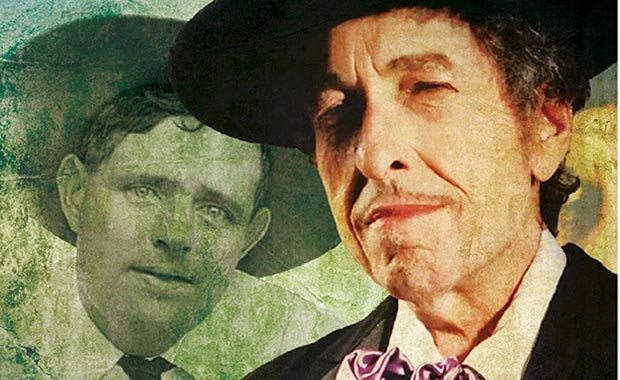 What does Bob Dylan have in common with Sonoma County’s literary legend Jack London? Not much, if you ask die-hard London fans. But ask renowned Dylanologist Scott Warmuth and you’ll hear a different story.

The New York Times, The New Yorker and
The Daily Beast have all paid homage to Warmuth’s scintillating brand of scholarship, which has stirred up the Dylan world. According to Warmuth, the American folksinger purloined words, phrases and sentences by the dozens from the novels, short stories and letters written by the author of The Call of the Wild, White Fang and nearly 50 other books published from about 1900 to 1916. All the supposedly borrowed lines appear in Dylan’s memoir, Chronicles: Volume One, published in 2004.

In feisty articles such as the “Dylan Dossier: The Jack London File” and “Bob Charlatan: Deconstructing Dylan’s Chronicles: Volume One” that were published online and in the pages of The New Haven Review, Warmuth presents strong evidence of what might be called literary larceny. To make his point, Warmuth prints the original London texts and Dylan’s copies so that readers can compare and contrast.

In the second of his classic dog stories, Jack London writes, “Life had a thousand faces and White Fang found he must meet them all.” In Chronicles, Dylan writes, “A folk song has over a thousand faces and you must meet them all if you want to play this stuff.” In the short story “The White Silence,” London writes that in the Arctic, “all movement ceases, the sky clears, the heavens are as brass; the slightest whisper seems sacrilege.” In Chronicles, Dylan writes, apropos of country-and-Western singer Hank Williams, “When I hear Hank sing, all movement ceases. The slightest whisper seems sacrilege.”

Many of Dylan’s adaptations of London are both playful and brilliant. In his article “Song of the Wolf,” Warmuth points to a passage in which London observes that his main character is “forced to the edge of the fire or the deep snow” and that “ten thousand years of culture fell from him, and he was a cave-dweller.” Dylan borrowed the imagery and describes Johnny Cash as a kind of “cave dweller” who “sounds like he’s at the edge of the fire, or in the deep snow, or in a ghostly forest.”

No big deal, readers might say. But Warmuth insists that when you add them all up, Dylan’s borrowings are a big deal, that they show that the singer read London’s work widely, that he was captivated by London’s language and that he felt so strongly about it that he inserted huge chunks of it into his own work. Call Dylan a blatant copycat or a lyricist in love with London’s writing.

The title of Warmuth’s article in The New Haven Review, “Bob Charlatan,” suggests that he wanted to expose the folksinger as a fraud. Perhaps he did. Today, however, he doesn’t call Dylan a “charlatan” or a thief. “To nail him down has never been my goal,” he says in a phone interview from his home in New Mexico. “From the start, I’ve wanted to know what books Dylan reads and how his creative process operates, because his art is so compelling.”

Warmuth is one of several students of Dylan’s work profiled in David Kinney’s Dylanologists: Adventures in the Land of Bob, a fast-paced book released this spring about Dylan’s fans and followers that reveals a lot about Dylan himself. As Kinney recognizes, sometimes it helps to take a sideways glance at an artist and not look him directly in the face.

Kinney borrows the conceit for his book from The Shakespeare Wars, a non-academic study in which author Ron Rosenbaum doesn’t write about Shakespeare, as one might expect, but about the legendary scholars who have written about Shakespeare, yet another genius who pilfered and tweaked material from historians who preceded him.

Jack London was as big a thief as Shakespeare, though he got into more trouble than the Bard. Copyright law posed more of a problem for writers in 1900 than in 1600. All his life London borrowed from his favorite authors and his literary role models, some of them famous, such as Rudyard Kipling. Not surprisingly he was labeled the “Kipling of the Arctic.”

Other writers whose work he looted were less well-known, such as Egerton Young, the author of My Dogs in the Northland, published in 1902, one year prior to the appearance of London’s own shaggy-dog story, The Call of the Wild. When copyright issues arose, London usually won; he had the money to defend himself in court and knew how to manipulate the media.

Andrew Sinclair, author of Jack: A Biography of Jack London says, “Jack certainly thought that he had the right to use other people’s plots in the same way as he used other people’s political ideas.”

Jack London never drew clear lines to divide fact from fantasy or to separate imitation from originality. He also recognized that copying could be the sincerest form of flattery, and that young talented writers improved by mimicking veteran authors. Ever since the Renaissance—and perhaps before—new writers have cannibalized old writers, and the literature of the present day has fed on the literature of the past.

As the Irish playwright Oscar Wilde astutely noted, “Talent borrows, genius steals.” He surely had himself in mind, and maybe Jack London too. If he were alive today, Wilde would recognize Bob Dylan as yet another genius and literary thief. In his own defense, Dylan might borrow from Jack London, who said, “I think the whole subject of plagiarism is absurd. I can conceive of no more laughable spectacle than that of a human standing up on his hind legs and yowling plagiarism. No man with a vivid imagination needs to plagiarize.”

According to musicologist Greil Marcus, Dylan fans—more than the fans of any other ’60s band, including the Beatles, the Stones and the Grateful Dead—assume that his songs are richly encoded and that it’s their mission in life to dig out the hidden messages and decode them. What’s perhaps more significant is that Dylan’s elliptical writings have given birth to the tribe of “Dylanologists,” including the very first, A. J. Weberman, and the very best, Scott Warmuth.

In New York in the 1970s, Weberman claimed that he sorted through Dylan’s garbage and found a motherload of confidential stuff. Maybe he did. Maybe he just talked trash. Scholars have poked holes in the stories about his adventures in dumpsterland. He did, however, coin, or at least popularize, the words “garbology” and “Dylanology.” A pioneer in the field, Weberman published the infamous Dylan to English Dictionary and argued that many of Dylan’s songs were about and specifically written for him.

Warmuth, the dean of Dylanologists, and Kinney, student of Dylanology, seem like fictional characters who have wandered from a Jack London tale: twins and doubles who genuinely admire one another. Keen critics of pop culture, both were shaped by the kinds of college classes that train students to discover influences and then provide credit where credit is due. Many of us were. Still, they both gave up on dreary footnotes and hoary bibliographies ages ago.

A liberal arts major in college, Warmuth was born in 1966, 90 years after London, an illegitimate kid traumatized by the circumstances of his own birth, arrived in the world, and 25 years after Abram and Beatrice Zimmerman, descendants of Russian Jews, named their infant son Robert Allen.

Warmuth knows the Dylan discography backward and forward. “I’m a Blonde on Blonde baby,” he says. “The first album I heard was Desire, when I was 10. My parents had it.”

Blonde on Blonde is, as he knows, as tangled as any Dylan album. On the 12th cut, “4th Time Around,” Dylan offers his take on “Norwegian Wood,” Lennon’s homage to Dylan. Princeton University historian Sean Wilentz describes the tune as “Bob Dylan impersonating John Lennon impersonating Dylan.”

For more than 60 years, Dylan fans have been scratching their heads and trying to figure him out, even when he seems obvious. When squares and traditionalists complained they couldn’t understand his 1963 ballad “Blowing in the Wind,” Dylan explained tongue-in-cheek, “There ain’t too much I can say about this song except that the answer is blowing in the wind.”

Everybody and anybody who was hip in 1963 knew exactly what he meant. The only Americans who didn’t understand belonged on the far side of the generation gap. “Something is happening here,” Dylan sings in “Ballad of a Thin Man,” one of the most memorable tracks on Highway 61 Revisited, his sixth studio album, recorded the same year as the 1965 Newport Folk Festival when he went electric. All Dylan fans know the line that follows it: “But you don’t know what’s happening here, do you, Mr. Jones.”

Like his mentor, Beat poet Allen Ginsberg, Dylan wanted his fans to dig deeply into his work. Then, too, in the spirit of poet Walt Whitman, he crafted songs about himself, about America and about ordinary Americans. To his own voice he’s added the voices of the famous, the notorious and the anonymous, hoping listeners would turn up the volume, tune into the words and identify pilfered phrases, images and sounds. What he’s done is what singers often do: “cover” the work of others.

Jack London “covered” other writers too, though London fans and scholars are often embarrassed by them. Moreover, an older generation of London biographers knows little if anything about Bob Dylan. Earle Labor, author of the definitive London biography, 2013’s Jack London:
An American Life, says, “I’ve heard about the Bob Dylan connection, but don’t know more than that. I’d like to know what you discover.” Even younger “Londonologists,” as one might call them, aren’t aware of the link.

Jeff Falconer, a docent at the Jack London State Historic Park and a longtime fan of both London and Dylan, didn’t know Dylan borrowed from London.

“I don’t think Jack would have been offended by Dylan’s borrowings,” he says, “though if he knew how much money he had, he might hit him up.” He added, “I like the idea that Dylan digs London.”

Nearly a hundred years after his death, London’s books still sell. Dylan keeps on writing and performing. Scott Warmuth continues to read London and listen to Blonde on Blonde and Desire.

“I recognized long ago that, like London, Dylan could have rested on his laurels,” Warmuth says, then pauses a moment and adds, “I’m impressed that he tours at a pace that would tire folks half his age and that he keeps trying new things. Before listeners can figure out his latest album, he’s already on to the next. There’s always more to say about Dylan. I don’t know what more one could want from an artist.”

Jonah Raskin is the editor of ‘The Radical Jack London: Writings on War and Revolution’ and the author of ‘Burning Down the House: Jack London and the 1913 Wolf House Fire.’ He taught Jack London’s work at Sonoma State University, where he worked for 30 years.