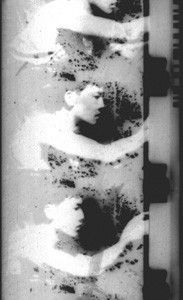 When Dr. Robert Hall confesses to having a feeling of “never being quite safe in the world,” one shifts about with a slight bit of impatience. Well, certainly–the world is a big and terrible place every single minute of every single day, though middle-class children growing up in small towns in Depression-era America might be thought to have been spared from random and familial evil.

In circumstances bizarre and heartbreaking, this was not to be for Hall. A physician, therapist and poet, he is also the cofounder of Santa Rosa’s Lomi School and Lomi Community Clinic. Devoted to somatic therapy, in which touch is applied to heal emotional wounds locked fiercely into the flesh, the Lomi technique is world-renowned for its breakthrough interdisciplinary approach to therapeutics–just as touch brought about an astonishing breakthrough for Hall.

As told in the meditative black-and-white experimental documentary Downpour Resurfacing, airing Tuesday, Jan. 27, on KQED (check your cable guide), healing was long overdue for the man. Using a nonillustrative shorthand of recurring and often abstract images, San Francisco filmmaker Frances Nkara allows Hall to tell his own story, conversationally, while she fills the screen with the dreamy accompaniment of her own visual narrative.

Though he remains mostly offscreen, Hall’s calm, resonant voice very carefully chooses the words to describe his childhood of abuse, while Nkara, using a mixture of archival tea ceremony sequences, modern dancers moving with spiky frenzy, water overflowing in bowls and cheery mother-and-son ’50s footage, creates a singular world in which the details of Hall’s story may settle and dwell.

When he was just three-and-a-half, the ordinary event of a new sibling occurred and Hall had a relatively ordinary response–he ran away from home. Traveling just a few blocks, however, he was abducted by a stranger and held in sexual torture for four days. Even today, he seems almost abstractly not to be able to believe that such horror could be visited on one so young.

But visited it was. Rescued by his father’s best friend, the boy was returned home to a mother who felt that she could perhaps purify the child through a series of healing beatings, and so secretly began doing so. Creating a false self, one that was confident and succeeded at friendships and academics, one that hadn’t been raped and beaten, Hall buried his memories from his consciousness. He didn’t speak for a year. Yet when, as a young adolescent, an adult male babysitter began to molest him, he simply fell wholeheartedly in love with the man. Such delirious childish affection, not surprisingly, was eventually enough to turn the molester away, stop the abuse and entirely convince Hall that he was entirely unlovable.

Yet still he succeeded, pushing the protective “false self” that he shined on the world toward professional esteem, marriage and fatherhood. And then one day, a body-work professional touched him on the leg during a course of massage.

In a flash, Hall could remember where he had been kept during the abduction, could remember all that his brain had so carefully kept from him. Once remembered, such memories must be managed.

“Repetition is the basis of spiritual practice,” he says slowly in the film as Nkara’s stylized images repeat onscreen. Positing that abuse victims practice in an infinite variety of ways that which was inflicted upon them, Hall believes that such a natural human symptom aims toward obtaining mastery over events that one can never master.

But as with daily rounds of prayer, each utterance is a way to try, and Robert Hall has gotten further than one could ever imagine he would.