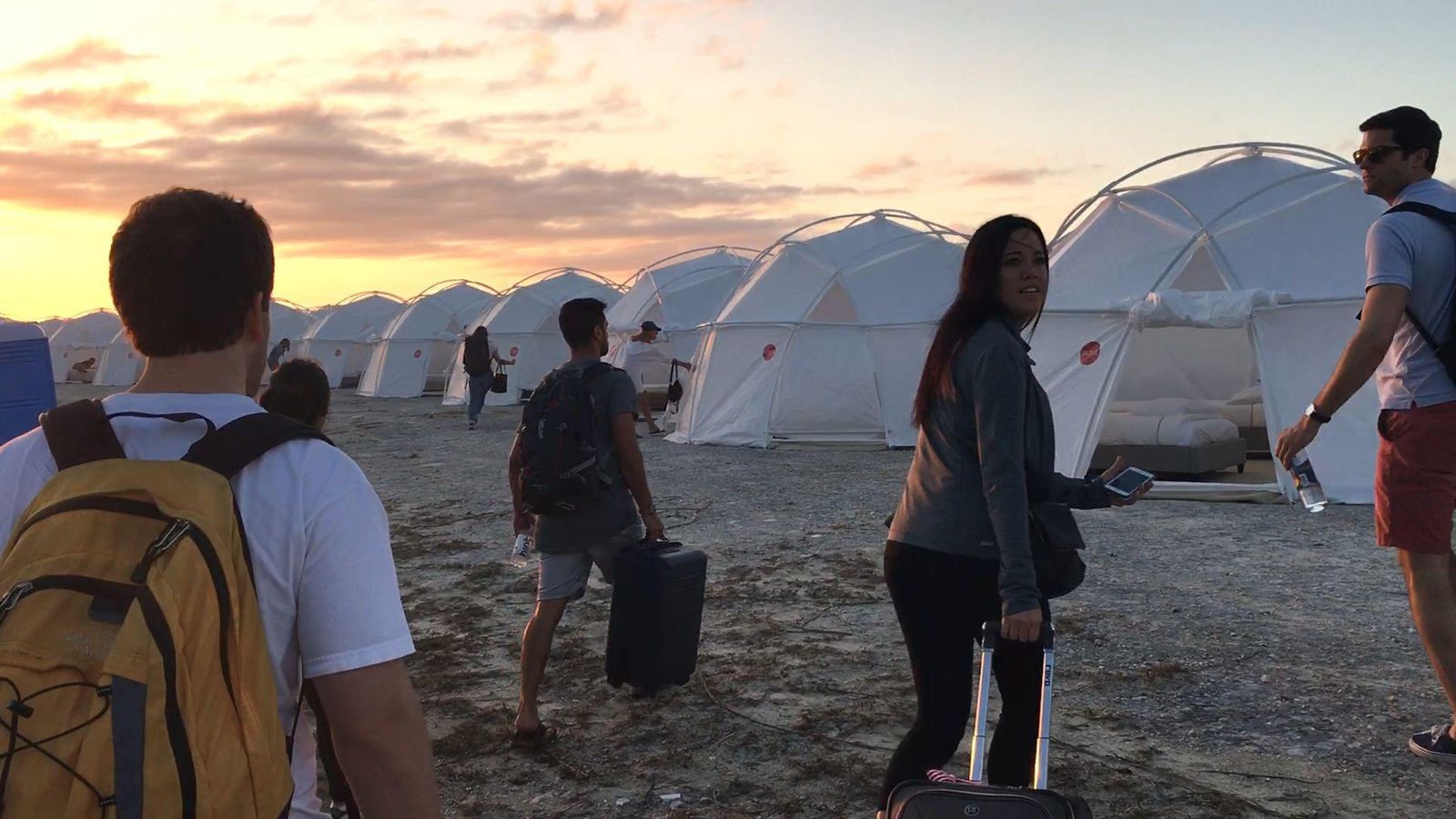 There they are, waiting for you. Super-models and Instagram vixens splashing in the Caribbean with the famous swimming hogs of Big Major Cay. Maybe they should have called it the Circe Festival instead of the Fyre Festival. The swindled victims weren’t literally turned to swine. But they weren’t treated much better than pigs.

Most of the world knows what happened, and moreover has had a real good laugh at it. The dueling documentaries Fyre Fraud (Hulu) by Jenner Furst and Julia Willoughby Nason, and Chris Smith’s Fyre: The Greatest Party That Never Happened (Netflix) take slightly different stances on the dreadful fest.

Both tell of how Jersey go-getter Billy McFarland made his name by selling the Magnises credit card to millenials, with a $250 annual fee. There were certain club benefits, disputed by the two docs; Netflix’s doc admires the Magnises lounge and club nights. The Hulu version snipes that the Magnises bennies were getting to rub shoulders with guys from Murray Hill, one of NYC’s most boring neighborhoods.

These Magnises (was it meant to be short for “Magnificent Penis”?) got McFarland got enough fame in the right places to fund the development of a band-booking ap called Fyre. It was to be promoted with an awesome music festival on a private Caribbean island in spring 2017. Rapper Ja Rule endorsed it to give it street cred. McFarland hired PR, which in turn used “Influencers”—professional inducers of online FOMO.

Everything went wrong. There was inadequate prep time, several changes of location, a surprise rainstorm and the especially bad idea to have the fest during a regatta weekend when there was no rental properties available. The elite arrived to find used disaster relief tents waiting for them, with windows that didn’t keep out the mosquitoes. They rushed back to the states, complaining into their iPhones every step of the way.

There’s more than a little overlap between these documentaries—both featuring the same viral video showing Ja Rule chased by the schoolboys from Lord of the Flies. The Netflix account, in which Vice media participated, has the most scandalous material: event planner Andy King tells of how McFarland begged him to fellate a certain Bahamian minister to get a planeload of Evian water released from customs’ duties.

Hulu’s Fyre Fraud has personal access to McFarland—in fact, the producers paid him to talk—when the grifter was on bail and secretly cooking yet more scams. Here we get childhood legends of McFarland’s hustling youth from his mom, in communications hilariously read out loud by text-to-speech software.

If Netflix’s Fyre:TGFTNH is more fair, it’s less fun. The title says it all—it doesn’t question the necessity of the fest. The Fyre Festival didn’t work, but wouldn’t it have been insanely cool if it had? Marc Weinstein, one of McFarland’s assistants who is still on hook for some of the unpaid wages, still argues “there was definitely a chance to pull it all together.” Thus Netflix’s Fyre:TGFTNH may be a stepping stone to the inevitable exculpatory whitewashing feature film with Jonah Hill or Leonardo Dicaprio playing McFarland. It’s inevitable, an on-screen pity party for a showman who dreamed too big.

By contrast, Hulu’s Fyre Fraud suggests a larger picture, in it’s account of how McFarland’s scams were hot air sucked up and made forceful by the Venturi effect of the internet envy-machine. One prefer Fyre Fraud’s sense in exploring the sleaziness of McFarland’s dream, with supermodels jiggling in slow-mo, posing and grinning—images that are, to borrow critic David Thomson’s phrase, “an advertisement for advertisement.”

It’s not going out into the weeds to suggest that this mirage called the Fyre Festival mirrored the way America fell for a charismatic figure, who cared less for truth than what his guts tell him. Was the Fyre Festival a merry distraction from the Trumpster Fyre, or do they parallel each other?

Fyre Fraud convincingly identifies the fraud-fest as just one more chimera of modern times, a 24 hour game of ‘let’s pretend,’ in which one cannot tell if someone is a delusional liar or the smartest person in the room.