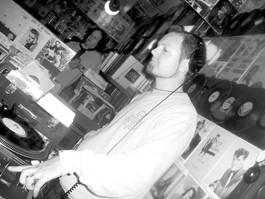 On Sunday night, amid the cavorting and eulogizing at Village Music’s closing party, DJ Shadow cues up a 45—”You’ve Made Me So Very Happy.” An appropriate send-off for John Goddard’s 50-year reign behind the counter of his Mill Valley record store, it also marks the final stretch of a unique spinning streak for the world-renowned musician.

“I just wanted to spend as much time here, and absorb as much as I could,” Shadow says, explaining his high-profile decision to spin records every day during Village Music’s final month. “I had a great time here,” he says, “and that means a lot to me.”

At a quarter to midnight, Village Music fills with diehard customers awaiting the store’s final moments, catching a last glimpse of history. Between handshakes and autograph requests, Shadow unsleeves a 45 of “I Second That Emotion” onto the turntable and drops the needle, keeping solemnity at bay.

Shadow (whose legal name is Josh Davis) first shopped these aisles in 1991, but it wasn’t until years later that he and Goddard made a deeper connection. One day, Goddard mentioned the best band he’d ever seen were Baby Huey and the Babysitters, a group legendary in the world of sample-based hip-hop. “I think he thought it was unusual, too,” Shadow says, explaining a kindred link, “that someone my age would even know who Baby Huey was.”

Shadow rifles through records, plays a novelty Doors medley and watches as half the store starts to sing along in the exact sort of communal experience that record stores were once known for. Strangers share stories, serving up potluck red beans and rice; at one point, a blues jam erupts, featuring customers and former employees spontaneously bemoaning the store’s closure. Someone encourages Shadow to sing a verse; he smiles and quietly shakes his head.

“I will miss this store very much,” he attests, just before the Champagne toasts and final goodbyes. Goddard cranks the manual cash register for the last few customers as the Mickey Mouse phone rings intermittently. Someone comes by asking to hear a Cornell Hurd record, and Shadow throws it on while the night winds down at his beloved hometown record store.

“In the last year, I’ve been to every continent on the planet buying records,” he says gratefully, “and I can honestly say that there’s no other place like this.”