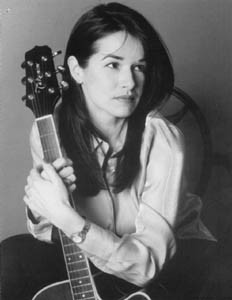 DON’T underestimate Roberta Donnay. The 5-foot-4 pixielike woman (the exact same height as Madonna, as Donnay is quick to point out) with long red hair bops around the Studio B recording studio in Sausalito in her black silk pants and purple velvet jacket with oversize buttons. In her little-girl voice, Donnay chats easily about hitchhiking around Europe as a teen, about her study of Buddhism, and about recently moving in with her new boyfriend.

But delve deeper and Donnay’s conversation starts to make references to her Grammy nominations, to her record label, and to her reason for being at the recording studio–mixing a product for a client. It’s then you begin to realize that the 32-year-old Donnay is a seasoned music industry professional.

The alt-rock recording artist, who started warbling at age 5 and describes her high-pitched singing voice as a cross between those of Shawn Colvin and Sting, is a songwriter, a record producer, and something of an impresario in the music biz.

“I really don’t fear the music industry,” Donnay declares. “I’ve been nominated for Grammies, and I’ve also been in big record company offices and been yelled at by record executives. I feel like it’s a big game.”

DivaBands kicked off last year when Donnay was offered a gig in San Francisco’s Red Devil Lounge. She assembled an all-female format as a benefit for women’s rights that was devoured by an audience hungry for more Lilith Fair-type gal concerts.

“It was a very interesting night,” recalls Donnay. “I noticed that the audience was completely different from my usual audience. It was mostly women, and it was a very respectful audience, very into listening.”

Donnay was invited to come back and “do that girl thing again” on a weekly basis. “I basically just called all my friends and began begging people to come down,” Donnay explains. “DivaBands started to go and took on a life of its own, with a lot of attention from the community.”

In the last year, DivaBands has showcased more then 64 Bay Area female artists in a variety of venues, including the Mystic Theatre in Petaluma and Sweetwater in Mill Valley.

“I think there’s a need in the community between artists to have to network with other artists and create a supportive atmosphere,” says Donnay. “Women in general haven’t had that bonding between themselves. We’ve basically been out there in the music scene as recording artists out there on our own.

“Historically, it’s been a lot easier for male artists because rock ‘n’ roll is a male-dominated business,” Donnay says. “Years ago radio would only play one female artist at a time. It only seemed competitive between women because they were really being kept out because the industry is run by men.”

DivaBands is all about getting exposure, Donnay explains. One example of a success story is DivaBands member BeRn, an Irish folksinger who was recently signed with a large independent record label after a talent scout spotted her at a DivaBands concert.

Prospective artists can log onto the Diva website for details on how to send in a package and possibly jump on the bandwagon. The main criteria, says Donnay, are that the band be female or female-fronted, experienced, and have been recently recorded.

Donnay says she sees DivaBands becoming a national organization in the future, with separate divisions such as world music, techno, and hip-hop–so those artists can hook up and do shows together.

“It’s all about girls hanging with other girls,” says Donnay. “It’s like a big slumber party.”

In the meantime, Donnay will continue with plans to expand the organization, with more radio and television exposure and extensive national touring. Next month she’ll take the DivaBands Showcase to New York City for a benefit concert for Afghan women.

“In the end, I’m just a crazed musician who believes the world is better because of art,” she says.

“If we didn’t have art, I don’t think I could stay here very long.”