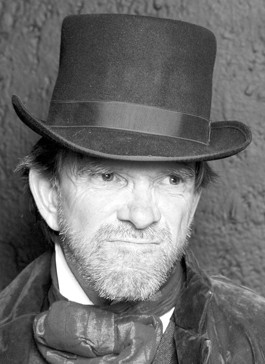 The Rep's 'Carol' stays true to the language of the original

I n most stage adaptations of Charles Dickens’ Christmas Carol , the emphasis is placed squarely on the ghost-story plot, the beloved waist-coated characters and often, as in ACT’s famous annual production in San Francisco, the tricky special effects. In the adaptation staged each holiday at the Sonoma County Repertory Theater, with a script by Preston Lane and Jonathan Moscone, the emphasis is placed squarely on the beautiful language of Dickens’ original text, first published in 1843 under the cumbersome title A Christmas Carol in Prose, Being a Ghost Story of Christmas . Under the affectionate direction of Gene Abravaya and the mischievous performances of an energetic cast, Dickens’ lively, funny, surprisingly poetic prose pops off the stage like dead old Jacob Marley leaping up out of nowhere in Ebenezer Scrooge’s bedroom.

Many forget what a wonderful wordsmith Dickens was, but this adaptation makes it clear that Mr. D loved playing with words as much as the miserly Scrooge loved counting his money. In introducing Ebenezer Scrooge to his readers, the author describes him as “a squeezing, wrenching, grasping, scraping, clutching, covetous old sinner, hard and sharp as flint, from which no steel had ever struck out generous fire, secret, and self-contained, and solitary as an oyster.” They are words meant to be spoken aloud, and the script finds clever ways to put Dickens’ gloriously witty narration into the mouths of the actors, who all take a turn as narrator, sometimes reciting whole phrases, such as the one quoted above, in rousing unison.

As Scrooge himself is the solid Scott Phillips, taking over the role from Eric Thompson, who has played the part at the Rep for the last several years. It will be interesting to watch Phillips grow into the role in years to come, especially with such a strong start. Playing a slightly younger, more agile Scrooge than many I’ve seen, Phillips interprets the greedy Victorian loan shark as a man who revels in his reputation as a nasty piece of work, cackling with pleasure at every new indication that he has frightened a child or disappointed a charity worker.

Scrooge, remember, is a man with a great sense of humor, albeit a wicked one, and Phillips embraces the character’s fondness for mean-spirited wordplay. His ultimate transformation into an exuberant lover of life is equally delightful, somehow drawing huge, warmhearted laughs with a line as simple as “I don’t know what to do.”

The rest of the cast take turns playing all the characters, and while the experience level onstage runs the gamut from fresh to seasoned, the cast is uniform in its high-spirited, infectious pleasure at playing out Dickens’ familiar story. Standouts included Chris Murphy, who as the quivering ghost of Scrooge’s dead partner, Marley, infuses the role with so much self-directed angst, twitching and shuddering agony, you just want to run up and give a there-there pat on the head, except that he might just bite off your hand.

Also very good is the young Gwen Kingston, who as Scrooge’s one-time love Belle is heart-tuggingly sweet, sincere and strong, both early on when she dances with a young Scrooge, eyes locked on him with obvious love, and later, when she heartbreakingly describes watching his “nobler aspirations fall off one by one.” Expect good things from Kingston in the future.

Bob Dougherty as Bob Cratchit, Scrooge’s long-suffering clerk, is excellent, especially in the later scenes involving the fate of his son Tiny Tim, and Hollie Martin, as Mrs. Cratchit (“Dressed poorly, but bravely, in ribbons”), imbues the role with a potent sense of affronted dignity. I liked the youthful Gabriel Stevens, who, as the Ghost of Christmas Past, manages to snap back and forth between being helpful and cordial to being frighteningly no-nonsense (with the help of some well-timed sound effects).

It is no simple thing to take a story so familiar and present it with such freshness and delight. The escalating sense of good feeling and wise humor makes this Christmas Carol one to savor and remember, like the repentant Scrooge, though Christmas and beyond.