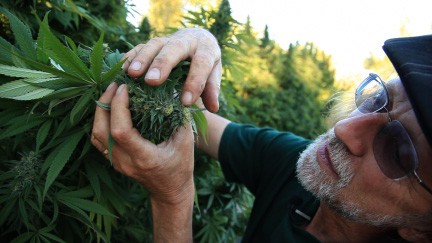 Home-care workers fight for better pay; We will never stop writing about weed

Just as this paper was going to press on Tuesday, July 21, Sonoma County home-care workers took to the streets of Santa Rosa to protest the county’s ongoing refusal to enact a $15 an hour wage.

It’s been a big fight in town, and protesters marched to the Sonoma County Administration Building to agitate for a wage hike for the 5,000-plus workers who take care of the elderly and disabled. The county contract for these workers ends in October. The Tuesday protest went down as union and county leaders met for collective-bargaining talks.

The county has passed a $15 an hour living wage bill for municipal employees—but not home-care workers, who are licensed and managed under a state program, the In-Home Supportive Services.

In a statement, Anita Torres, a home-care worker from Sonoma, highlighted the unfairness of it all: “If you take care of plants and grass, you get the minimum wage, but if you take care of people, the county deems you unfit to be paid the minimum wage. It’s time the supervisors get their priorities in line and apply the living-wage ordinance to home-care workers, who are providing one of the most valuable services in the county.”

Sonoma County leaders like Supervisor David Rabbitt agree that the workers are underpaid at $11.65 an hour, but he says the county can’t raise the wage to $15 without real pain. Plus, he notes that there are rules under the state Public Employees Relations Board that say you can’t just raise wages willy-nilly, even if it’s the right thing to do.

The local wage issue is complicated because the state has already set out to raise wages for in-home workers throughout California as a phased-in program, which was initiated in 2011 through the creation of a public authority called the Coordinated Care Initiative.

Under that program, the county has until 2018 to raise the wage to $15 an hour in a collective bargaining arrangement with the Service Employees International Union. But Rabbitt told the Bohemian recently that union efforts to jack wages were more about getting cheapskate counties to boost home-worker hourly rates beyond $8.50 an hour, which is as ungodly as it is unlivable.

Rabbitt says Sonoma County is already in the top tier in what it pays home-care workers.

It was not immediately clear whether the protest had dislodged a few more shekels from the supervisors, but it is unlikely.
—Tom Gogola

The Santa Rosa law firm Adams & Fietz held a mixer and book event for the local cannabis industry this past Thursday night. The main attraction: a book signing of The Cannabis Encyclopedia by Jorge Cervantes.

The crowd of about 35 people came “out of the shadows” for this event. In the house: the Sonoma County Growers Alliance; Women Grow, Sonoma County chapter; Citizens for Responsible Access; a cannabis lab owner; a cannabis garden center owner; and several growers.

Cervantes was the star of the show. His book was published on April 20 and he describes it as his magnum opus.

“It took me six years beginning to end to write it, and many more years of research,” he said.

“It’s the only book you’ll ever need about cannabis cultivation, says cannabis enthusiast and mixer attendee Suzanne Cardiff. “Every bit of information is in it.”

Attorney Benjaman Adams has practiced criminal defense law for about two decades, and is keenly interested in keeping cannabis users out of prison.

“I’ve seen all kinds horrendous crimes caused by alcohol, spousal abuse, child abuse, violent assault—all kinds of nasty stuff,” he says. “Other than getting caught with it or growing it, I’ve never seen cannabis ever cause a crime. I think the ‘reefer madness’ and the idea that marijuana is somehow on par with heroin or meth is just insane.”

Change is in the air. State Sen. Mike McGuire authored a bill that would create a regulatory apparatus around California’s hodge-podge of medical cannabis laws.

“I enjoy how the cannabis community is becoming bolder in its ability and willingness to adopt sound regulations,” says Craig Litwin, a founding member of Citizens for Responsible Access, a cannabis-advocacy group.

A statewide set of regs is considered a necessary prerequisite if California expects to enact a general legalization regime in 2016.

“We are at the bottom of the iceberg, and there is this huge amount of opportunity for people,” says Adams, “not only for the marijuana itself, but you have all the ancillary businesses, which can be even more lucrative.”

Government officials will be involved in making sure it’s
a safe product but won’t necessarily be “putting people
in a cage over it,” says Adams.
—Haley Bollinger