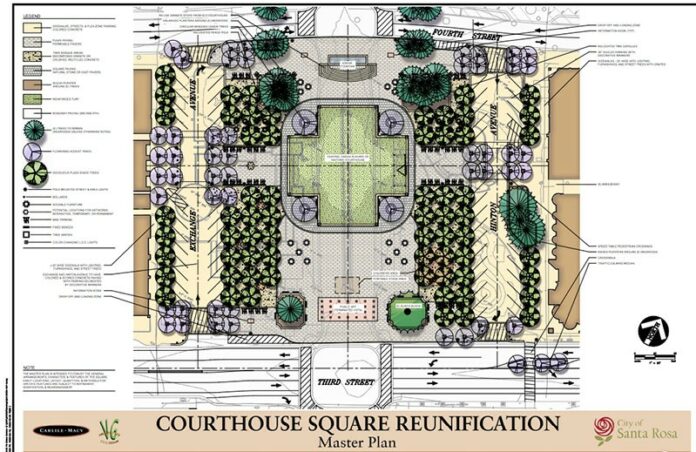 The Santa Rosa City Council approved a plan Jan. 26 to reunify downtown’s Courthouse Square, ending a months-long battle between downtown businesses and tree lovers over the fate of about three dozen redwood trees on the site. The upshot: some trees will go, but they will not go to waste.

The city identified 20 trees, including eight redwoods, that will be removed during the project, which is scheduled to be completed by mid-November this year. The reunification plan creates a public space where Mendocino now runs between Third and Fourth streets.

So what will become of the trees once they are removed? Any trunks or roots of redwoods and cedar removed from the site will be shipped off to an ongoing project at Santa Rosa’s Colgan Creek. According to the city, “the logs and root wads will be incorporated into Phase 2 of the Colgan Creek restoration, where the wood will help habitat for fish and birds, and also protect the creek banks.”

Last April, the Sonoma County Agricultural and Open Space District awarded a $2.6 million grant to Santa Rosa to restore a 1.3 mile-section of the creek in the southwest part of town, a process that began in 2007. As part of the deal with city, the open space district will retain a conservation easement over that stretch of creek.

Redwood agitators at Courthouse Square might take some measure of comfort in the pay-it-forward plans for Colgan Creek, the restoration of which “will result in a more natural meander and will provide a healthier seasonal creek ecosystem that includes riffles, pools, and native streamside vegetation for a contiguous riparian corridor.”