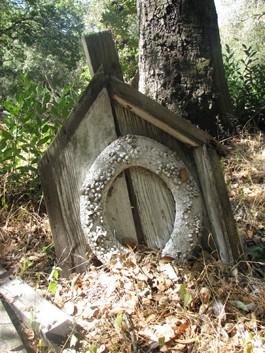 MOUNTAIN CEMETERY: Founded in 1841, this Sonoma burial ground holds the remains of General Vallejo as well as Henry Boyes. Is ‘Count’ Haraszthy lying below this grave marker artfully fashioned from a toilet seat?

One thing is is certain—he is dead. That “Count” Agoston Haraszthy was devoured by alligators while crossing a jungle river in the summer of 1869 is not so certain. None bore witness, and no trace of him has ever been found.

Yet even today we hear faint whispers contending that Agoston Haraszthy—world adventurer, visionary entrepreneur, fraudulent raconteur and feted Father of the California Wine Industry—fabricated his own gruesome demise so as to lend cover when stealing his way back to the town of Sonoma undetected.

BLOOMFIELD MOONRISE: The Bloomfield Cemetery was established in 1860 after area residents grew tired of burying community members in the local schoolyard. The stone figures of this graveyard evoke chess pieces and an earlier grandeur.

The end, they say, came near midnight on a chill and blustery Noche de las Brujas—the unholy Night of the Witches. Flames from a mammoth bonfire were seen dancing and spasming demonically up from the distant valley floor. A trim and bearded Agoston Haraszthy, aged 56, well-dressed in long coat and top hat, watched for a time before turning away, striding purposefully up the moonlight-dappled hillside of the oak- and madrone-speckled Sonoma Mountain Cemetery.

A moldering stench of dank rot and the scrunching sounds of just-fallen leaves mimicked mortality with each step taken. Ill-tempered winds blew wood fencing from its moorings. Gusts swirled and eddied debris, as if frantically stirring every loose thing together in dark cauldrons of evil intent, while blustery squalls upended lovingly tended family plots, tumbling over vases and lesser grave markings, revealing skulls and maggot-cleansed bones reaching for life from their earthen graves below.

4-16-08: ‘I sure do miss you’ begins this poignant note placed on a grave at the Forestview Cemetery (also known as the Forestville Odd Fellows Cemetery).  Our dry summers keep such fragile momentoes intact far into the autumn.

Agoston Haraszthy arrived at his rendezvous. A wraithlike figure emerged from darkness. He moved slowly into the shallow patch of dull orange moonlight. Haraszthy smiled at the man, warmly outstretching his hand in greeting. This welcoming gesture was met with a certain violence that none who tell this tale can yet explain. Without so much as a struggle, it was ended. Haraszthy’s lifeless self, dragged to a freshly dug grave, was plunged down and hastily covered.

No one knows just where “Count” Agoston Haraszthy’s remains actually lie. But it is said that each year on Noche de las Brujas, Haraszthy’s spirit, in the form of the well-dressed man he was, walks the entire night in a purposeful fashion, up, down and throughout the old Sonoma Mountain Cemetery, a broad smile racing across his face, extending his hand to any living soul who should dare meet the fright of his friendly gesture.

BABY: It wasn’t uncommon in the 1800s to not name an infant until it was certain whether he or she would live. Many larger families also wearied of naming their  youngest immediately, having run out of fresh ideas. This lad or lassie was interred at the Tomales Catholic Cemetery.

A fairly exhaustive list of Sonoma County cemeteries is found at

OUR LORD OF THE HANDMADE BOWL: At the tiny Gilliam Cemetery outside of Graton, a grave is marked with a white wooden post incongruously topped with a stitched vessel featuring Biblical images.

MARKERS: The wooden headstone of Elmer Isaacson (1905–1980) is accompanied by the Forestview Cemetery’s own marker for Marian L. Isaacson (1914–2006). Elmer’s wife? His sister? These silent testaments to the connections of life give inevitable rise to their own stories.

BLOOMFIELD MOONRISE: The Bloomfield Cemetery was established in 1860 after area residents grew tired of burying community members in the local schoolyard. The stone figures of this graveyard evoke chess pieces and an earlier grandeur.able rise to their own stories.